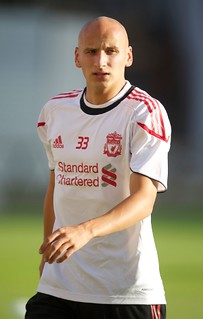 Rafa Benitez saw something in Jonjo Shelvey in the summer of 2010. The former Liverpool manager purchased the midfielder for £1.8 million from Charlton Athletic. At the time, Benitez was on his last legs at Anfield and the team was in need of a major overhaul. Shelvey wasn’t a player fans could get excited about. He was 18 and had no top-flight experience. He was a player for the future. And the future looked bleak then. No one had time to wait. So, Shelvey’s arrival fell on deaf ears and Liverpool slumped.

Two years have passed and Shelvey has pushed his way into the Liverpool team. Benitez has gone. Roy Hodgson had his time cut short as well. But Shelvey remained. And under Dalglish, he’s found his footing and his place in the side, even if the team continues to slip further and further from Champions League contention, even behind Everton — an unthinkable thought at the beginning of the season.

Eighth place isn’t where Liverpool wanted to be when the season started. That poor positioning, along with injuries, has lead to the emergence of Shelvey. Dalglish never envisioned playing Shelvey. He wanted the young midfielder to seasoned experience while on loan at Blackpool. But after the season ending injury to Lucas Leiva, and with Steven Gerrard’s on going injury problems, Shelvey returned to Liverpool. He was in good form for Blackpool — six goals in 10 matches — and Ian Holloway was sad to see the player go, so much so that he wanted to bring Shelvey back for the second half of the season if he could.

“If I was going to get anyone in at the moment, I would try and get Jonjo Shelvey because we have already had him and I know what the lad is capable of. I really like him,” Holloway told reporters over the winter as interest for the services of Shelvey heated up in the second half of the season.

The move didn’t happen, and for the first few weeks after his return, Shelvey didn’t see much of the field. He did, however, keep working hard, waited patiently and fought for his chance.

Now, with the Champions League in the distance — way, way in the distance — for Dalglish and company, Shelvey is getting a run of games in the center of the Liverpool midfield. And it’s great to see the progress he’s made. It’s great to see that shining bald head glisten in the sun, hope radiates from his noggin. (Side note: Shelvey suffers from Alopecia and has since a young age, which explains why he has no hair. I am in no way making fun of him for this. I am only stating I love how shiny his head is.) It’s magical to see his long, thin, witch-like nose on the field because he is capable of moments of magic, something he’s shown before for the England youth teams and Blackpool.

Shelvey reminds me of Steven Gerrard, a player he is quoted to admire. He has a knack for popping up in the right place at the right time and scoring goals from the midfield. He doesn’t have the same kind of pace Gerrard once had, but Shelvey has a similar vision on the field and understanding of the flow of a game. That’s something you can’t teach, and it’s something that is invaluable. Goals are the most precious commodity in the game, and if someone has a knack for putting the ball in the back of the net or popping up at the right time to finish a chance, that’s a trait I would never trade away, no matter a player’s other flaws.

Shelvey runs more like a dinosaur than a footballer, but he does it with great effect. He bounds up and down the field, back hunched over, always looking to pick off a pass or jump into a tackle. He is acutely aware that he isn’t as fast as other players, so he gets himself on his toes and shuttles well and positions himself well to get into the action.

Shelvey showed the potential Benitez saw in him when he signed the Charlton player in 2010 when Kenny Dalglish started the midfielder in his preferred position, behind a forward as a withdrawn striker/attacking midfielder, against Blackburn. Shelvey was one of six players in the starting XI 22 years old and younger. And even as Liverpool went down to 10 players, and gifted Blackburn two penalties, one of which was converted, Shelvey and the rest of Liverpool pushed hard and eventually dealt a major blow to Blackburn in the dying moments of the game when Andy Carroll scored the winner.

Shelvey, Jordan Henderson (who cost a lot more) and Jay Spearing give Liverpool a backbone in the midfield for the future. Shelvey and Henderson have played, and worked well, on the international stage as England Under-21’s. Liverpool hopes that partnership will continue to blossom in the Liverpool red.

Henderson and Spearing look more like a traditional pairing in the center of the midfield — Spearing the bulldog, Henderson the tempo creator — and that’s all well and good, but they don’t separate Liverpool from other teams. That’s where Shelvey, a hawk who can score and create chances, comes into play.

Shelvey has the intangibles to be a player who can catapult Liverpool into the future. His nose for goal and his reading of the game makes him a player to watch. A player who, if he blossoms into the player anticipated in 2010, can push Liverpool back ahead of Everton and fighting for a place in Europe on a regular basis. Let’s just hope the magic doesn’t fade.

Article with thanks to LFC Boston Supporters Group