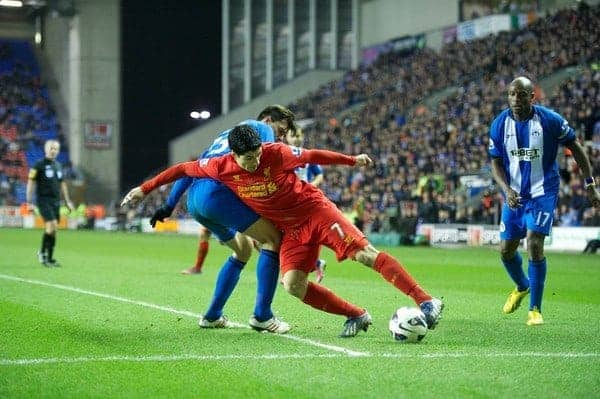 Whether Luis Suarez remains a Liverpool player for the forthcoming season may still be up in the air, but our friends at Kickoff.co.uk use their stats database to show how his departure wouldn’t be all doom and gloom anyway. Despite receiving a rapturous reception from the Anfield faithful during Steven Gerrard’s testimonial at the weekend, Luis Suarez has made it abundantly clear that he wants to leave Liverpool in search of Champions League football.

Whilst the departure of the Uruguayan would leave a massive hole, here are a few reasons as to why all would not be lost if he did move on to pastures new.

Although Suarez enjoyed a fine campaign individually, the team actually fared better without him in Premier League matches. Sixteen victories from 38 games represented a win percentage of 42%, but, as you can see below, that fell to 36% in encounters featuring the former Ajax striker:

This is the joint-worst record (tied with Martin Skrtel) of all players that featured in at least 15% of the possible playing time over the course of the season which is a quite incredible statistic given how vital his presence in the team is deemed to be. It is when compared with the same figures for recently-retired club-legend Jamie Carragher, however, that we can really start to see who will be the bigger loss:

As you can see, the win percentage with Carragher in the team was some 22% greater than when Suarez pulled on the famous red shirt. The experienced defender featured far less regularly, particularly during the first half of the campaign, but he spent enough time on the pitch (45%) to make these numbers relevant.

That being said, it is impossible to think that there won’t be a huge hole left in terms of goals should Suarez decide to leave Liverpool. As last season’s club top goalscorer with 23 Premier League goals, he contributed an impressive 32.3% of Liverpool’s league tally. However, there is an argument to suggest that his goals may not have been quite as important as they first seem.

Any charge towards the top of the table is built around solid home from and many would argue that an opening goal at home is the most important goal in league football. According to the statistics, grabbing the opener at home gives you a 70%+ chance of going on and winning the game and for Liverpool that percentage was even higher last season. When they scored first at Anfield last season (11 times), they went on to win 81.8% of the time (9 wins, 1 draw, 1 defeat) and when they conceded first they went on to win 0% of the time (2 draws, 3 defeats). With that being the case, surely their “one man team” striker would be the main contributor to this most vital of areas?

In fact, not at all. Suarez scored just 2 opening goals at Anfield last season, the same total as Steven Gerrard, Raheem Sterling and Martin Skrtel. As can be seen in the above chart, it’s actually the case that the vast majority of his home goals came when Liverpool were already in a winning position (6 goals), whilst just 3 goals gave Liverpool the lead and the remaining 2 brought them level after being a goal behind. So, whilst all goals are valuable in their own way as each match ebbs and flows in a very differently, it could be argued that Luis Suarez scored just 5 truly meaningful goals in 17 home appearances last season. That hardly seems irreplaceable, does it?

With that in mind, the question must be: ‘Who would be Suarez’s replacement should he decide to leave?’

Well, although Daniel Sturridge may not have quite the same standing in the world game as his illustrious fellow forward, he has already shown that he is more than capable of filling the former Ajax man’s boots:

The England international netted ten times for Liverpool in the Premier League after arriving at the club in January, with this representing a goal every 109.2 minutes. He was not always deployed in a central striking role either and it is interesting to note that half of his successful strikes came in matches not featuring the Uruguayan.

Let us now compare his numbers with those posted by Suarez:

Whilst 23 top-flight goals is undoubtedly an impressive return, these were scored at a rate of one every 128.48 minutes. This means that it took Suarez roughly 20 minutes more playing time than Sturridge to find the net. If Sturridge could keep that kind of level up over an entire season, the Anfield faithful could well have themselves a new 30 goals a season hero.

Fabio Borini is another potential replacement and his performances in the blue of Italy’s U21s this summer will have given fans much cause for optimism; however he is yet to fully demonstrate his true ability in the Premier League, despite Liverpool being his third club in the division.

2013 signings Philippe Coutinho (January) and Iago Aspas (summer) are also excellent options. Coutinho has the quality to unlock any defence and impressed greatly in the later stages of last season, whilst Aspas, who netted 12 La Liga goals in a struggling Celta Vigo side, is another with the ability to help bridge a gap left by a Suarez departure.

The thing to keep in mind here is that, as Brendan Rodgers himself pointed out, no player is bigger than Liverpool Football Club. Most people would agree that Suarez is a world-class talent, but he has also generated his fair share of negative headlines during his time on Merseyside.

It has been proven that the team can cope without him, in the short-term at least, is it better to cash in on a player that clearly wants to move on?

If you fancy having a look at the stats for yourself, check out the Liverpool stats page on kickoff.co.uk here.