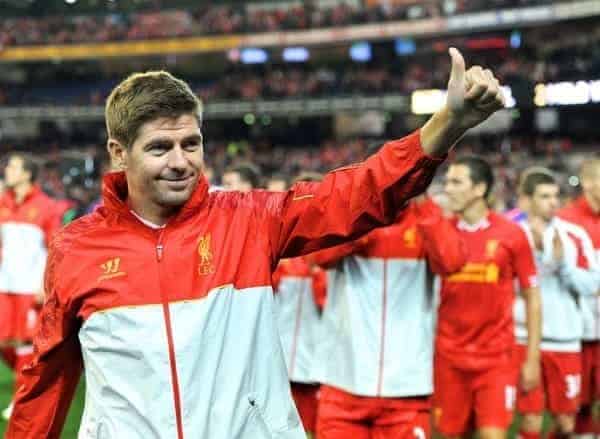 Looking back on his career at Liverpool ahead of his testimonial match on Saturday, Steven Gerrard has explained how he has relished the demands and expectations of Reds fans down the years. Gerrard will celebrate his career and ten years of being Liverpool captain tomorrow when the Reds face Olympiakos in a pre-season friendly at Anfield.

The 32-year-old has seen the good times and the bad at Anfield, from the club’s Cup treble in 2001 and European Cup triumph in 2005, to the dark days of ownership issues and managerial changes at the turn of the last decade.

But ‘Captain Fantastic’ says the demands placed on him as a captain and player of the club have spurred him on ever since making his debut as an 18-year-old in 1998.

He told the Liverpool Echo this week, “Liverpool fans are a tough crowd – the expectations and what they demand from players every single game, whether it be the third round of the Carling Cup or the Champions League final, you are expected to perform at the same level.

“They are only ever happy when they win.

“It does come with pressures and demands but I wouldn’t want it any other way.

“I don’t think I would enjoy it if I played at a club where there wasn’t the same demands and pressures. That’s what I enjoy: big games and big pressure situations.”

As we celebrate the career of Gerrard, This Is Anfield editor Max Munton has written a piece on the day a 19-year-old Gerrard scored his first goal for the first team, in December 1999.

Liverpool vs Olympiakos – the Steven Gerrard testimonial – gets underway at 12.45pm on Saturday, 3rd August 2013. It’s live on BT Sport in the UK and we’ll be bringing you live updates throughout the special day.

Jurgen Klopp: Liverpool “will have some fun” with “exceptional talent” Curtis Jones

Lincoln 2-7 Liverpool: Player Ratings – What the media and statistics say