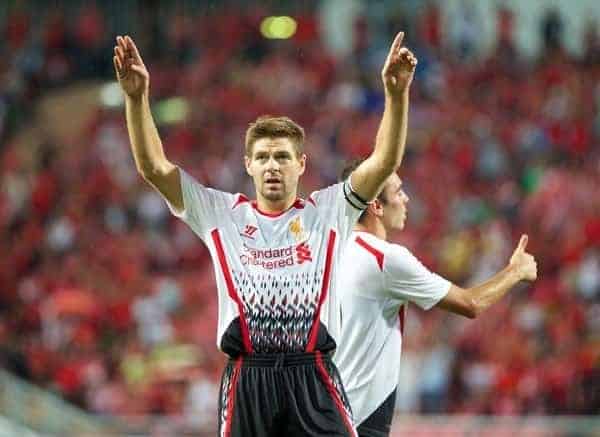 On the eve of his testimonial, it is revealed that Liverpool captain Steven Gerrard turned down a move to Bayern Munich last summer. In an interview with The Times newspaper the inspirational midfielder explained:

“I had a chance to leave last year. It was for a club in the Champions League but I wasn’t tempted. I’ve been through that before.”

Gerrard has spent his entire career at Anfield, and enters a record eleventh season as captain of the club. He celebrates his testimonial, the proceeds of which go to The Steven Gerrard Foundation, against Olympiakos on Saturday.

Gerrard urged Luis Suarez to similarly snub a move away from Anfield:

“He will get many more chances to move on, if that’s what he wants to do further down the line. I just think a player of his level and quality should wait for the big ones to come.

“Luis deserves to maybe play in one of the best teams in world football in Barcelona and Madrid and they will come calling for him again.

“So I am hoping, from a biased point of view, that he stays for another year and shows the form he did last year… which could help take Liverpool to that level.”

Gerrard signed a new contract at Liverpool this summer, which will take him to past his 35th birthday.

Gerrard’s testimonial is a sell out, the game is live on BT Sport (12:45pm kick off, UK). The match will feature Liverpool legends Robbie Fowler and Jamie Carragher but is a competitive pre-season friendly for the club. We’ll have coverage throughout the day, live from Anfield.

Have a read of editor Max Munton’s look back on Gerrard’s first ever goal for LFC.