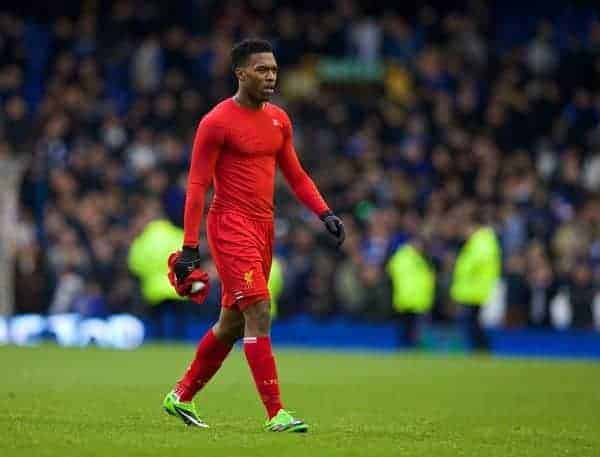 Daniel Sturridge has revealed his delight in Liverpool winning their third game of 2014 against Stoke City on Sunday afternoon. Sturridge was following in the footsteps of Luis Suarez, who hailed Liverpool’s togetherness in an interview last week ahead of the win at the Britannia Stadium.

The England international returned to action as a second half substitute against Stoke, setting up Suarez for his second of the game, before sealing Liverpool’s win with a fifth goal himself late on.

It was the first time Sturridge had been in action since November, when he suffered ankle ligament damage during a training session.

Brendan Rodgers and Reds fans will have been delighted to see him immediately link up with Suarez on his return from injury, picking up where they left of — with the ‘SAS’ tag.

“I’m delighted with the result for the boys,” Sturridge told the club’s official website. “It’s important that we work hard as a team.

“It’s a difficult place to come and play, and we showed a lot of character, so we’re very happy with the result.

“Being out of the fold has been very hard for me mentally, watching the boys. But it’s also good that we’ve been getting results and working very hard as a team.

“It’s about the boys at the end of the day. It’s very hard when you’re on the side, watching a team, and you want to be involved in the fun and be out there.

“I’m just happy that we’re up there within touching distance and we’re in the top four. It’s great to be a part of it.”

The cynical amongst us will see Sturridge’s latest comments as pure propaganda coming from the increasingly well oiled Liverpool FC press machine.

But maybe that is exactly the point. In contrast to past public relations, all the players are saying the right things, giving a very positive outlook at Anfield.

Liverpool moved up to fourth in the Premier League with their win at Stoke, and will be hoping Arsenal drop points away to Aston Villa on Monday night.