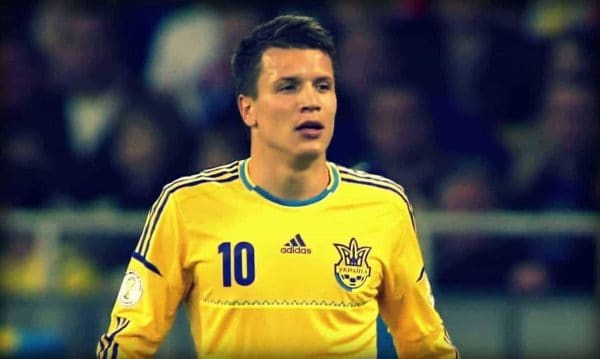 Liverpool managing director Ian Ayre has flown to Ukraine to finalise a deal to bring Yevhen Konoplyanka to Anfield.

Reports emerged this week that Konoplyanka, who plays for FC Dnipro Dnipropetrovsk, is Liverpool’s number one target during the January transfer window, which closes on Friday night.

Chris Bascombe of Telegraph reports on Thursday that the Reds face some last minute competition from a familiar rival:

However, in what has become a familiar theme in recent seasons, it emerged on Wednesday night that Spurs are rivalling Liverpool for the player.

24-year-old Konoplyanka’s agent is hyping up the transfer situation, too, suggesting it is far from a done deal with Liverpool, though he does expect his client to sign for an English club imminently.

The agent told Gazeta.ua, with quotes translated by ESPN, “When writing about the interest from Liverpool, these people only know part of the truth.

Liverpool were left disappointed last week when Chelsea beat them to the signing of Egyptian international winger Mohamed Salah.

They will be hoping history doesn’t repeat itself with Tottenham‘s late interest.

Bascombe adds in his article for the Telegraph of the importance of Liverpool signing a high-quality player to remain in contention to finish fourth in the Premier League this season:

A deal for Konoplyanka would go some way to appeasing those eager to ensure an ideal opportunity to return to the Champions League – and retain players of the calibre of Luis Suárez – is not squandered in the final 15 games of the season.

Liverpool’s 4-0 victory over Everton on Tuesday night, and Spurs’ 5-1 defeat to Manchester City on Wednesday night, means there is now a three point gap between the two teams, who sit fourth and fifth respectively.

Furthermore, Brendan Rodgers’ side have a better goal difference than Spurs by some 30 goals.