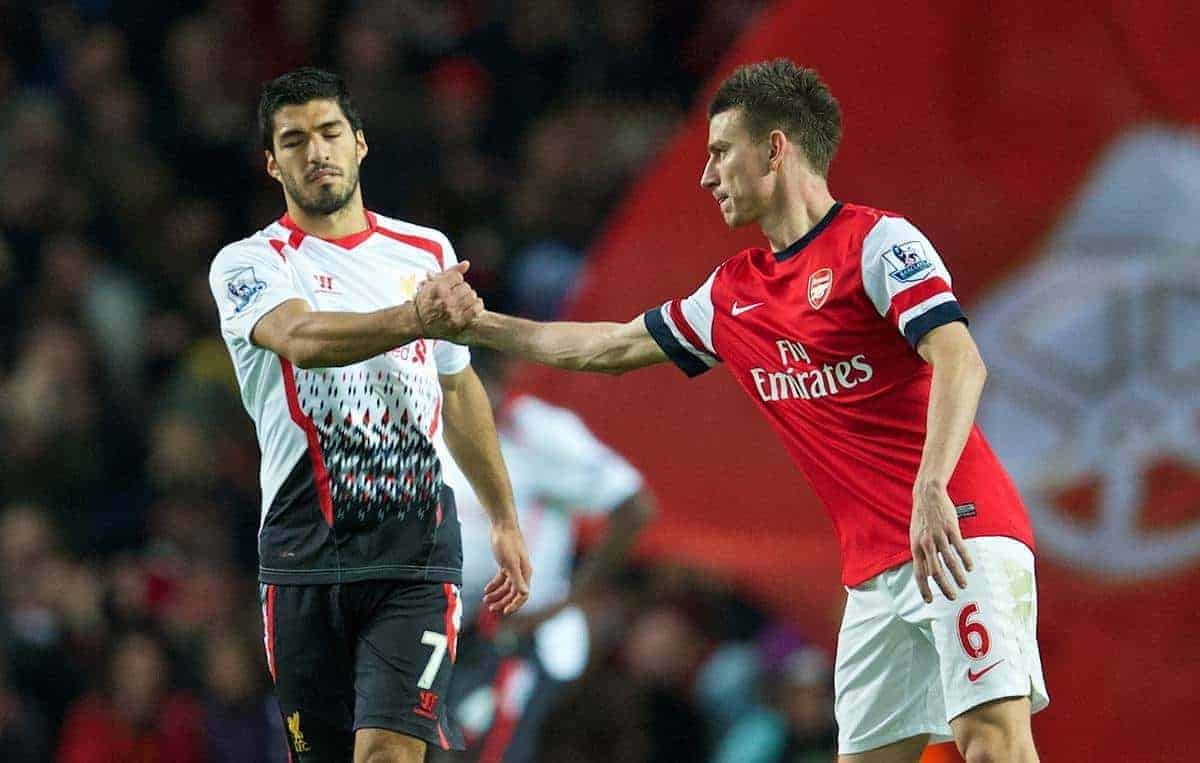 Liverpool host Arsenal at Anfield in this Saturday’s early kick-off (12:45pm) as the Reds look to narrow the gap between themselves and the top-of-the-table Gunners to a five points. Adam Griffies (@whatahitsonlfc) previews the match. [table id=27 /]
Liverpool have come out on top in just one of the last six meetings with the Londoners: a 2-0 win at the Emirates Stadium in August 2011.

This will be the first of the sides’ two meetings in the space of eight days, with Liverpool facing an away trip to Arsenal in the fifth round of the FA Cup on 16 February.

Both teams, unbeaten up to now in 2014, share an array of attacking talent and two managers who advocate aesthetically pleasing football and like their teams to dominate possession. Subsequently, the battle for control could prove pivotal.

The clubs’ offensive powers are demonstrated clearly by statistics, having scored a total of 105 goals between them in 48 matches combined this season in the league; that is an average of 2.2 goals per game.

I’d expect the majority of chances created in the match to stem from penetrative, central play, as both sides boast creators who like to drop into pockets of space and look for defence-splitting passes.

This is underlined by the fact that six of the seven players who have executed the most successful through balls per game in the 2013/14 Premier League are either Liverpool or Arsenal players. To satisfy your curiosity, the anomaly is Manchester City’s midfield master David Silva, who is leading the way with an average of 0.7 through balls each match.

Liverpool were boosted last week by the return to full training of central midfielder Joe Allen, and although he was a substitute against West Brom, he could have a crucial part to play for the visit of Arsenal.

Brendan Rodgers has deployed a fluid 4-2-3-1 system in recent games, partly due to his hand being forced by injuries to Lucas and the aforementioned Allen, with Philippe Coutinho operating as a floating number 10 behind the frontman.

While the Brazilian is probably at his most effective in this position, playing him there does slightly compromise midfield solidity, an area of the field which is unequivocally vital against Arsenal.

Bringing in Allen would allow Rodgers to switch to a more compact 4-3-3; the formation which was so successful in our 5-0 demolition of Tottenham in December – Allen alongside Jordan Henderson, in front of a sitting Steven Gerrard. The tenacity of the central pairing would shield Gerrard and allow him to dictate play from deep as a regista.

Rodgers still has injury woes in defence; Mamadou Sakho, Daniel Agger, Jose Enrique and Glen Johnson all continue to be ruled out through injury and will miss Saturday’s clash. The manager did have some positive news on the latter in his pre-match press conference, stating that the attacking full-back is “making a great recovery” and “should be back next week.”

Arsenal manager Arsene Wenger is unbeaten in his last six Premier League trips to Anfield, winning three and drawing three of those games. However, if he wants to sustain that run, he’ll have to cope with a number of midfield absentees.

Aaron Ramsey and Theo Walcott are side-lined with long-term injuries, while holding midfielder Mathieu Flamini is set to miss out through suspension. Ironically, the Frenchman also missed Liverpool’s visit to the Emirates earlier in the season, though the Reds will be hoping to capitalise on his absence more than they did that day.

Jack Wilshere is also a slight doubt for Saturday’s game, having sat out Arsenal’s win over Crystal Palace last weekend with a knock, although I’d expect him to be involved.

It’s a hard one to call, this. Should Rodgers set up in the 4-3-3 shape, I’m confident we’d be able to get a firm grip on what will be a crucial battle in midfield, and consequently win the game. One thing is for sure: we’ll need Anfield behind us throughout the 90 minutes.

Despite being aware of the irony created by declaring this with almost weekly regularity, it’s safe to say Saturday’s game is Liverpool’s biggest of the campaign so far. A win would not only cement our place in fourth, but it could also ignite Arsenal’s annual mid-season capitulation, thus bringing them back to within our grasp.