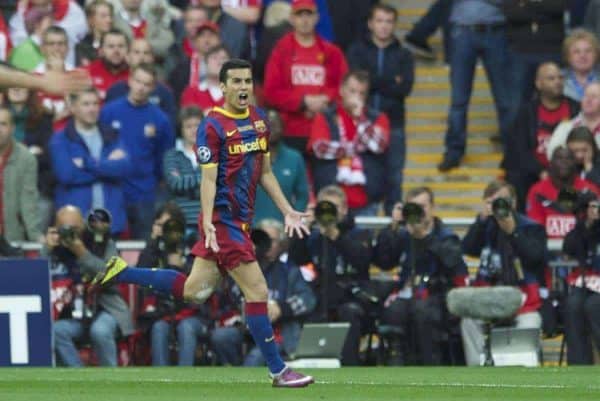 We take a look at this morning’s Liverpool transfer rumours, with Barcelona manager Luis Enrique apparently dealing a blow to Liverpool’s move for Pedro.

Brendan Rodgers’ move for Barcelona forward Pedro has been dealt a blow by the Catalan club, according to Spanish publication Mundo Deportivo.

Roughly translated, Gabriel Sans claims that “[Luis Enrique] is preparing a technical template with Pedro at the forefront.”

“They are not listening to offers, although they know the interest of teams from England (Liverpool and Arsenal), France (PSG) and Italy (Rome).”

Despite the 44-year-old’s intention to overhaul the club significantly following his appointment as manager—including Cesc Fabregas’ move to Chelsea yesterday—Pedro seems to be one player who will stay at Barcelona under Enrique.

Elsewhere, following his engagement this week, Liverpool striker Fabio Borini has once more been linked away from Merseyside.

The Northern Echo report that the 23-year-old Italian remains a target for Sunderland boss Gus Poyet, although the Wearside club would need to pay “in excess of the £10.5m paid to Roma for him in July 2012.”

It is believed that whilst Borini remains a part of Rodgers’ plans at Anfield, the club would be persuaded by such a considerable fee; following Rickie Lambert’s transfer, Borini is arguably the Reds’ fourth-choice striker.

However, Poyet “would be reluctant to invest a large slice of his transfer budget on just one player this summer, regardless of how well he did on loan last season.”

This has led to tenuous links to a swap deal involving the Black Cats’ Adam Johnson, and the former England international would surely relish a move to Liverpool.

The 26-year-old scored eight goals and made five assists in 36 appearances last season, and would bolster Rodgers’ squad to some extent.

However, predictably, “Liverpool have other options in mind ahead of him despite an interest.”

One such player is Bayern Munich winger Xherdan Shaqiri.

Sky Sports Italy journalist Fabrizio Romano, a reputable source, claims that Liverpool’s interest in the Swiss international—set to star at the World Cup against Ecuador on Sunday—is concrete.

A pacy, physical prospect, Shaqiri would be an ideal signing for the Reds, particularly if a move for Southampton‘s Adam Lallana continues to stall.

How do you feel about the latest Reds rumours? Let us know in the comments below.