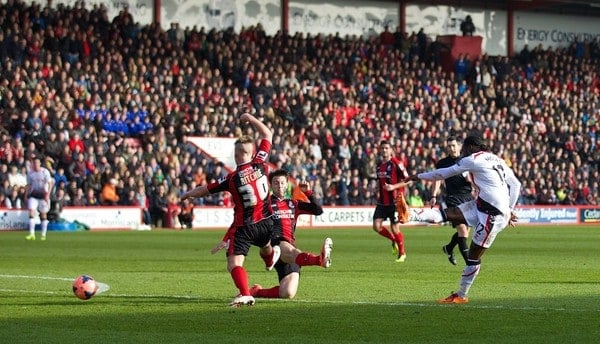 Liverpool’s Capital One Cup (League Cup) quarter final against Championship side Bournemouth is to be shown live on Sky Sports on Wednesday, 17 December (7.45pm kick off). The Reds and The Cherries were drawn against each other on Wednesday night, with Bournemouth having seen off West Brom in the fourth round on Tuesday night.

Eddie Howe’s side are going strong in the Championship, currently in fourth place, just two points off the top. They won every game they played in October, including a 8-0 hammering off Birmingham City.

The sides met in the FA Cup third round last season, with Liverpool winning 2-0 at The Goldsands Stadium courtesy of goals from Victor Moses and Daniel Sturridge.

The match takes place following a trip to Old Trafford on the Sunday and before The Reds’ welcome Arsenal to Anfield the Sunday following.