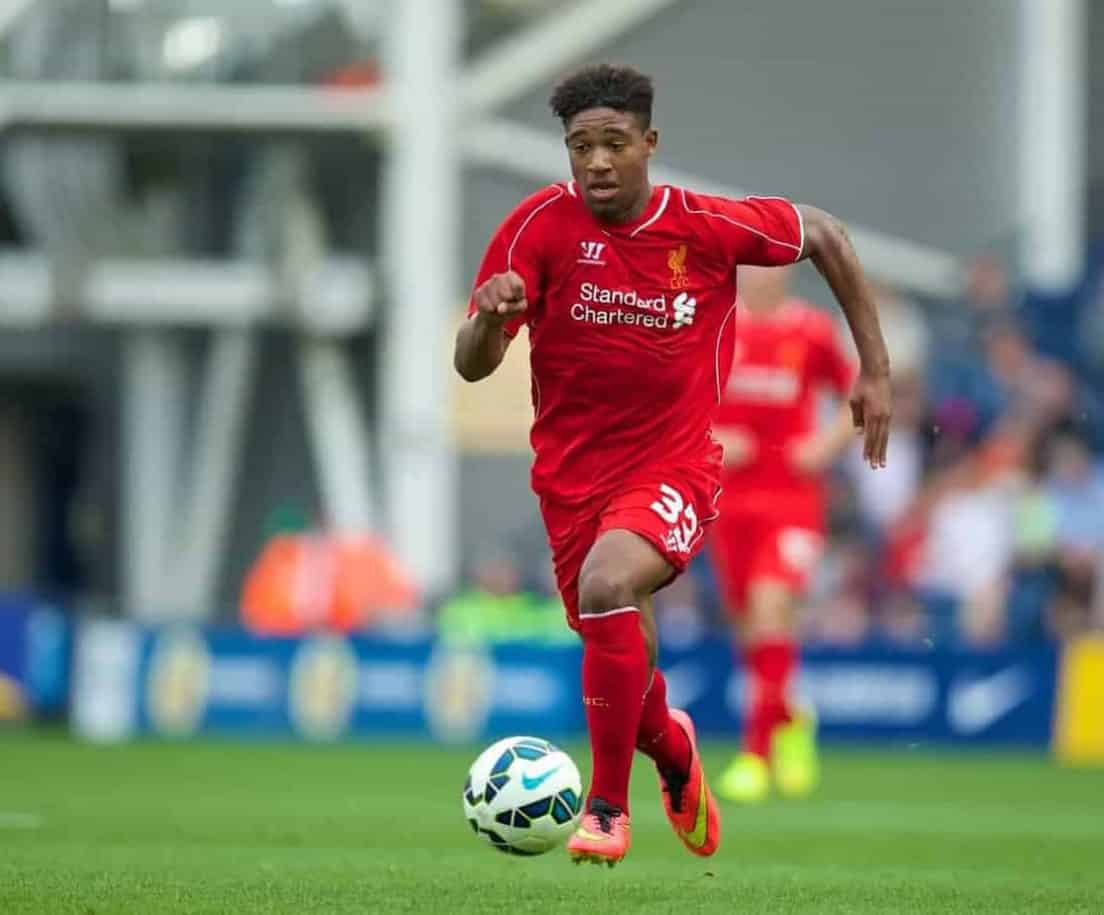 Ben Twelves takes a look at how the loaned members of the Liverpool squad performed for the temporary clubs throughout the weeks’ fixtures. Liverpool’s talented 18-year-old continues to impress at Steve McClaren’s Derby County as he grabbed his third goal for the club on Tuesday night in their 3-2 win over Huddersfield Town.

The youngster started on the left of a front three and took only seven minutes to find the net – slotting into the bottom corner from a cut back from the left – and he played 92 minutes before being withdrawn as his side held on for the win which moved them to fourth in the Championship table.

Jordon Ibe on his superb strike for Derby during their 3-2 win over Huddersfield last night: http://t.co/py3y1eHXQd pic.twitter.com/er0KwPacC8

Despite scoring in midweek, Ibe made way to the bench on Saturday for his loan club in their outstanding top-of-the-table clash 5-0 win against Wolves which positions McClaren’s side handsomely at the top of Championship.

The Reds’ hot prospect entered proceedings as a second half substitute with 15 minutes left to play – coming on to join in the Rams’ three man attack with his team-mates already five goals to the good.

Great from the team today, and to climb another 3points up the league.. #DCFC

Belgian striker Origi completed the 90 minutes for Lille on Thursday night in their Europa League defeat to neighbours Everton at Goodison Park.

The Reds’ £10million man started as the central striker in a three man front line and endured a largely frustrating night in front of goal, as his side struggled to create opportunities for the 19-year-old to hit the back of the net.

Divock Origi half by numbers:

Liverpool’s loaned star then endured an equally disappointing match on Sunday afternoon, as his side slumped to their second loss in four days – losing 2-0 away at Reims.

The Belgium international started the game in attack alongside Nolan Roux, but Origi once again had little impact on the game – having one off target shot according to whoscored.com – before being substituted in the 72nd minute with his two goals behind and down to 10 men.

Defender Wisdom started at right back and played the second half of the match on the opposite side for West Brom on Sunday afternoon in their 2-0 defeat to a rejuvenated Newcastle United side at the Hawthorns.

79' – What a chance for Andre Wisdom. A poor first touch and an even poorer finish see United's two-goal lead remain intact. #NUFC

The Reds loaned man didn’t enjoy the best performance of his career as he looked vulnerable defensively, and he lacked technical quality going forwards and in the final third, as he spurned two good opportunities in dangerous attacking areas in the second half.

84' – Another sight of goal for Wisdom but his first touch isn't too clever. #NUFC clear.

After producing a Man of the Match performance last weekend for Sami Hyypia’s Brighton, Portuguese playmaker Teixeira kept his place in the starting XI and played 70 minutes for his loan club in their 1-0 win over Wigan on Tuesday night.

Liverpool’s loaned man started in the number 10 role for the Seagulls – the central position of a three behind the striker – and he had a hand in the goal by releasing Sam Baldock down the right who crossed for Gary Gardner to put Albion ahead after just 54 seconds.

Teixeira was unlucky not to register on the score-sheet and double his sides lead, after his well struck effort smashed against the cross bar instead of finding the net and after helping Hyypia’s men hold on to claim their first win in 12 league games.

Teixeira hits the bar from a good LuaLua run and cross. The follow up header is called for offside. #BHAFC unlucky not to be 2-0 up.

Two successive starts in four days saw Hyypia drop Teixeira to the bench on Saturday against Blackburn, and the Reds youngster, who was recalled into the Portugal under 21 squad after aduration out of the international scene, was an unused substitute frustratingly successive decent performances.

Great to see Joao Teixeira called up for the Portugal under-21 squad. #bhafc

Aspas once more found himself amongst the substitutes for Sevilla’s Europa League win over Standard Liege on Thursday night – despite his hat-trick last week – a game in which the Reds’ loanee was an unused sub.

The Spanish striker endured to matches in a row without any minutes as this time he remained as an unused substitute for Unai Emrey’s side in their 1-1 draw with Levante on Sunday morning.

Liverpool’s Spanish midfielder received a welcome recall to the Malaga squad on Saturday night in their 2-1 home victory over Eibar, after being left out for three consecutive match-day squads.

The Reds loanee started on the bench on his return, but Alberto came on in the second half with 12 minutes left to play and the scores level at 1-1, however there wasn’t enough time for the 21-year-old to make an impact on the game.

Ilori missed loan club Bordeaux’s 2-1 away win against struggling RC Lens on Saturday once again through injury, and as a result the pacey Portuguese centre back missed out on an international call-up to the under 21 side.

Moroccan winger Assaidi was left out of the match-day squad for by manager Mark Hughes for Stoke’s impressive 2-1 away win against Tottenham at White Hart Lane on Sunday afternoon.

Uruguyan centre back Coates edges closer to a return from injury but Sunderland’s 1-1 draw against Everton on Sunday afternoon came too early for the Reds loanee to be involved.

Under 21 centre back Paez was missing from the Bologna squad on Saturday in their goalless draw against Carpi.