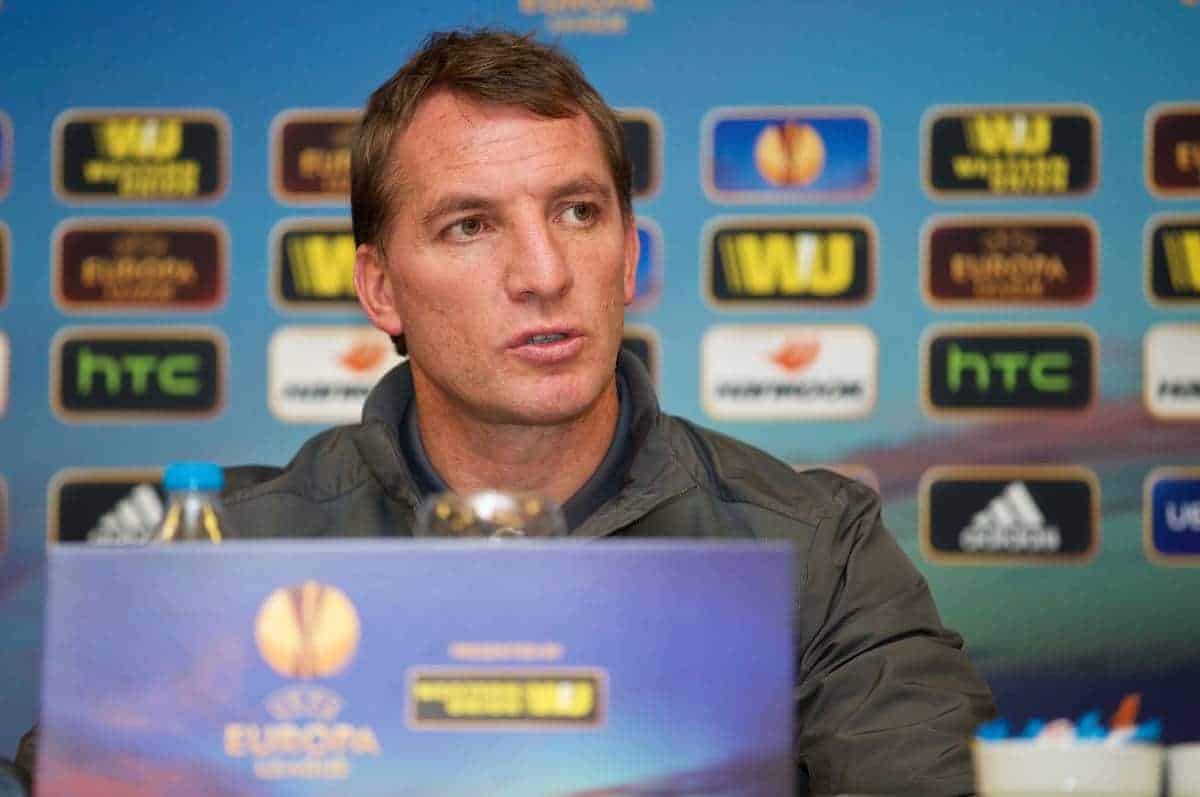 Liverpool resume Europa League action on Thursday night (6pm GMT kick off) in a crunch second leg against Besiktas at the historic Ataturk Stadium. Ben Twelves takes a look at the team selection options ahead of the clash. Brendan Rodgers’ confidence-filled  Reds travel to Turkey looking to finish of the job started in the first leg against Slaven Bilic’s side to progress to the last 16 of the Europa League.

Liverpool will arrive at the famous Ataturk Stadium with a slender one goal advantage to show for their work at Anfield a week ago – thanks to Mario Balotelli’s nerveless late penalty – and another big effort will be required in order for Rodgers’ men to complete the task in what promises to be an extremely challenging night in Istanbul.

Thursday’s tough clash will certainly be a different encounter from the fixture played on Merseyside last week with the Turkish team needing to score to have any chance of progressing, and a more defensively testing occasion awaits for Liverpool, who will need to bring their outstanding domestic defensive record on the road to the European stage.

Rodgers: we respect the opponent. We understand it's a difficult game. But we've been playing very well away from home

Goals win games however and should the Reds be able to find the net against the Black Eagles – who have suffered back to back defeats and surrendered their place at the top of the Turkish Super Lig table – it could end the tie as a contest and provide another significant morale boost for the squad ahead of Man City’s imminent arrival at Anfield on Sunday.

The Reds have taken a much changed and youthful looking squad to Istanbul in the absence of a number of first team players as injuries, suspension and rotation dictate ahead of crunch Premier League fixtures.

Philippe Coutinho and Jordan Henderson have not travelled with LFC squad to Turkey.

Brad Jones, Jon Flanagan, Jose Enrique, Lucas Leiva and Steven Gerrard are all still side-lined and will miss the match, and Rodgers has some fresh and unwelcome injury concerns over Jordan Henderson and Mamadou Sakho, who have picked up ankle and hip injuries respectively, resulting in both being left at home.

No Sakho or Johnson either, plus Markovic suspended.

Glen Johnson is another who hasn’t travelled after missing the last training session before departure due to illness, while Lazar Markovic will serve the second of a four match European ban, and Philippe Coutinho is set to finally receive a welcome rest after making 19 consecutive starts.

With the squad void of senior figures, youngsters Jordan Lussey and Williams have been included in the travelling party, with Ryan Fulton, Cameron Brannagan and Jerome Sinclair all set to join the group directly from Portugal where they featured for the Reds under-19s on Tuesday as they bowed out of the UEFA Youth League against Benfica.

No Coutinho or Henderson in #lfc squad v besiktas. Fulton, Williams, brannagan, lussey and Sinclair included in a youthful squad.

Shirts in the starting XI are up for grabs with changes forthcoming, and with Sakho out, Kolo Toure could come in to make his first appearance since returning from African Nations Cup duty, which would in turn allow Emre Can to operate from a natural central midfield role in Henderson’s absence alongside the improving Joe Allen.

The Liverpool boss faces a tricky dilemma with his use of Daniel Sturridge and Raheem Sterling however, with City’s arrival impending, and Rodgers could opt to start one and rest the other ahead of Sunday, and instead use Mario Balotelli from the start following two goals and an assist in his last three outings.

With options somewhat limited, Rodgers has a fairly straightforward selection with the remainder of the first team at his disposal.

The tricky decision comes in the Reds attack however, and how best to rotate and utilise regular picks ahead of another two games in quick succession against City and Burnley next week.

Sterling started and played 90 minutes against the Saints with Sturridge featuring for only the last half an hour at St Mary’s making them both options to start on Thursday night, and with Sturridge coming in for the Brazilian magician, this is how Liverpool are likely to look at the Ataturk Stadium:

With the fixture list unrelenting and two matches instantly following, Rodgers needs to ensure key players are as fresh as possible and that could see the Northern Irishman adopt a different approach over Sterling and Sturridge.

This would see the 20-year-old begin on the bench allowing Balotelli to play alongside Sturrdge in attack, with Sterling held in reserve to enter later in the game for the 25-year-old. That way, both enjoy some form slight rest ahead of Sunday and Wednesday’s fixtures.

That slight alteration could see Liverpool’s line up look like this come 6pm, kick-off time:

Rodgers: it's a really iconic stadium for the club. We'll look forward to it. The big pitch will suit our style with our pace and movement

A tough occasion awaits Rodgers’ young side in what will certainly be a hostile atmosphere, and despite the narrow advantage from the first leg, a professional performance will certainly be needed in order for the Reds to make it through to the last 16 of the competition.