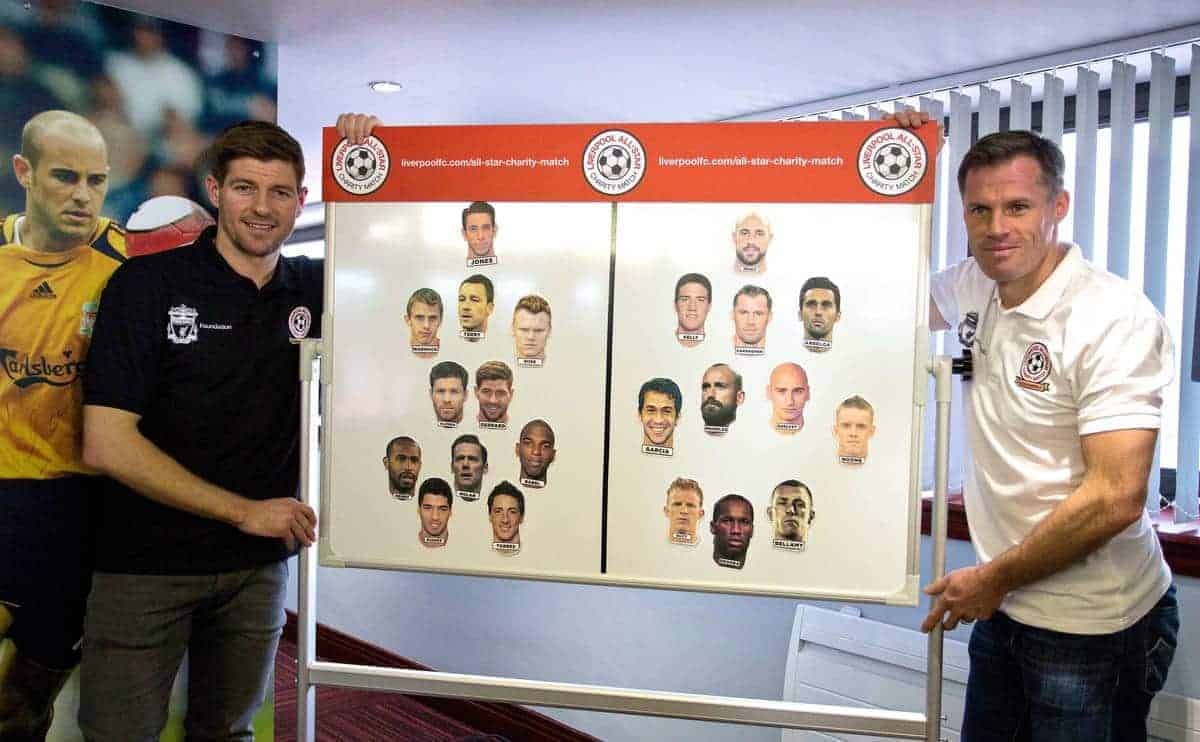 The frustration and boredom of another international break has arrived, but while many Liverpool players will be away on national duty, others will take part in Steven Gerrard’s All Star charity match this Sunday.

It would have been lovely for Liverpool to have had another Premier League game as soon as possible, in order to erase the painful memory of Sunday’s 2-1 defeat to Man United.

As it is, we have to put up with the tedium of an international break, sweating over whether the travelling Reds stars return to Melwood unscathed next week.

Who will/won’t be on international duty?

Daniel Sturridge and Adam Lallana have already withdrawn from the England squad, ahead of their clashes with Lithuania and Italy, with groin and hip problems respectively. Both are doubts for the vital clash at Arsenal on 4th April.

Jordan Henderson and Raheem Sterling are fit though, and will be key players for the Three Lions, while Glen Johnson and Rickie Lambert have both been left out by Roy Hodgson.

Philippe Coutinho has been rewarded for his brilliant run of form with a call-up to the Brazil squad by new head coach Dunga, while Mamadou Sakho should feature for France in their Euro 2016 qualifier against Denmark.

Joe Allen is retained by Wales for their showdown with Israel, after some sparkling performances in the centre of Liverpool’s midfield, Martin Skrtel will captain Slovakia for their games against Luxembourg and Czech Republic, and Lazar Markovic is in the Serbia squad to face Portugal.

Simon Mignolet‘s involvement with Belgium could depend on whether he recovers from the ankle injury suffered against United at the weekend, while Emre Can and Javier Manquillo are included in Germany and Spain’s respective Under-21 squads for their matches with England and Italy.

Croatia’s Dejan Lovren is another who has been ruled out, with the 25-year-old suffering from a recurring abdominal problem.

So who does that mean is likely to play a part in Gerrard’s much-anticipated charity game on Sunday afternoon? The captain recently revealed that any Reds player fit and not involved with their country is likely to take part.

Brad Jones will certainly play a part in goal, while Toure, Jon Flanagan and Lucas Leiva are all fit and available. Alberto Moreno missed out on call-ups for both Spain’s senior and Under-21 squad, which means he should also be involved.

Johnson and Lambert will both play following their England axing, and Mario Balotelli’s Italy exile means he should be around to add spice to the occasion. Jordon Ibe remains sidelined, but forgotten man Fabio Borini may feature, as might Jose Enrique.

The game will kick-off at 3pm (GMT) on Sunday, and is available to watch on LFCTV. Coverage will begin at 2pm.