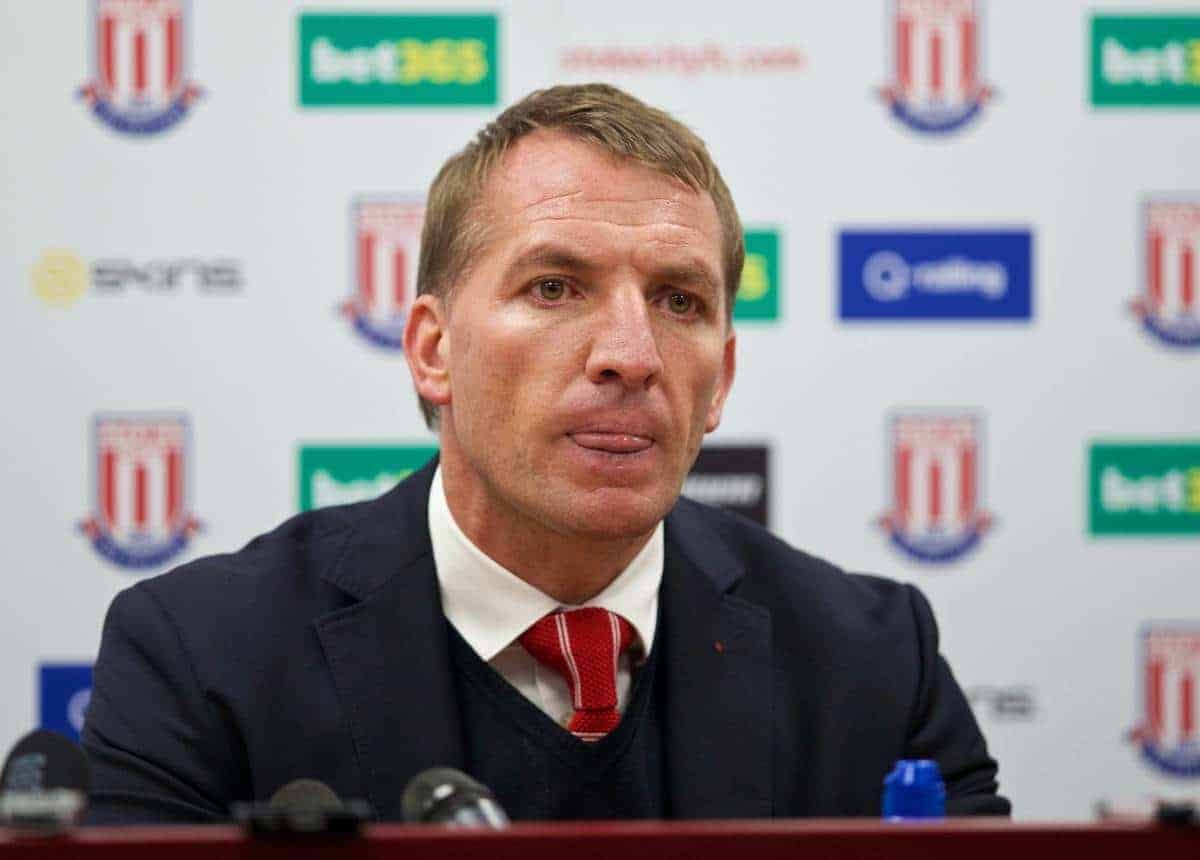 After Brendan Rodgers’ Liverpool were crushed 6-1 away to Stoke City in the last game of the season, Jack Lusby says it is time for a change of manager. It’s never nice to call for a manager’s head in football, and it’s hardly befitting of Liverpool Football Club to do so.

But after Liverpool’s 6-1 thrashing away to Stoke City on Sunday—a result which sees them finish sixth in the Premier League after last season’s second-placed heroics—now may be the time for Brendan Rodgers to receive his P45.

Goals from Jonathan Walters, Charlie Adam, Steven N’Zonzi, Peter Crouch and a brace from Mame Biram Diouf saw the Potters on their way, with a lone Steven Gerrard strike the Reds’ consolation.

This game signals the end of Gerrard’s Liverpool career, and it may be the same for Rodgers.

But just why does the Ulsterman deserve the sack? Given that it’s so fresh in the memory, Liverpool’s humiliation at the Britannia Stadium serves as the perfect evidence of why Rodgers’ future should be considered.

Unfortunately, it seems it was always going to be that way.

Rodgers opted for a monstrously unbalanced 4-3-3/4-2-3-1/4-4-2 formational mess, with any of Adam Lallana, Philippe Coutinho or Gerrard himself serving as Liverpool’s most-advanced attacking player.

Emre Can was, again, utilised at right-back; Jordan Henderson and Joe Allen’s roles were indecipherable in midfield.

Stoke dominated in every area. Adam put himself about as Stoke’s No. 10, dictating play from that advanced role, with Diouf the fortunate recipient and the gleeful finisher.

N’Zonzi was masterful in defensive midfield, marrying steel with finesse in sheer style—it was a Patrick Vieira-like performance from the Frenchman.

Erik Pieters and Ryan Shawcross were resolute in the back line, quelling any hope of a Liverpool comeback—Pieters made seven tackles and interceptions combined, the joint-highest total on the day; Shawcross made a phenomenal, no-nonsense 17 clearances.

But barring N’Zonzi—who Liverpool could do a lot worse than in the defensive-midfield market this summer—these are all extremely ordinary players.

Liverpool made them look like champions. But are we surprised? After the game, Rodgers told reporters: “There are a number of key elements of the performance that didn’t surprise me. We will address those in the summer.”

The manager could be talking about how his side were relentlessly exploited in the defensive flanks, or how they were utterly turgid in the creation of chances—let alone the conversion of them.

Or how about their inability to even keep possession for extended periods?

They didn’t surprise anyone. These are mistakes that Rodgers has made time and time again this season.

Can isn’t a right-back. He’s a central midfielder with the ability play at centre-back and at a push at left-back, as he did with Bayer Leverkusen.

Neither Lallana, Coutinho or Gerrard are centre-forwards. They’re the club’s creative players, the ones who should be looking to feed a centre-forward.

Jordon Ibe isn’t a wing-back. He’s a potentially devastating winger whose fragile 19-year-old development is hindered in this reductive role.

These key elements are easily addressed. There are solutions already in the squad, albeit in some positions rather paltry in their quality. Javier Manquillo is a fine, young right-back; Fabio Borini is a suitable centre-forward option in terms of what Rodgers wants.

These are glaringly obvious solutions that have been ignored throughout the season by a growingly maladroit manager.

Where last season Rodgers was ruthless, this term this has dissolved into stubbornness.

It’s poisonous, and Liverpool have become a limp, easily manoeuvred outfit as a result.

Shipping Up to Boston Rodgers will head to Boston following this result to face Liverpool owners Fenway Sports Group in a customary end-of-season review.

But after seeing his side drop to sixth in the Premier League, clinging desperately to the Europa League for next season, John W. Henry will have plenty of questions to ask.

After spending £117 million on players last summer, FSG will want to know just why the Reds couldn’t keep up with the likes of Arsenal and Manchester United, and why seventh-placed Southampton rose up as victors following a window in which they sold Lallana, Rickie Lambert and Dejan Lovren to the Reds for a combined £49 million.

They will want to know why Rodgers was unable to implement a cohesive structure on the field of play, with the mess that was Sunday’s tactical approach the perfect example.

They will note the growing malaise within the Anfield faithful, and perhaps recognise that now is time for change.

Continuing his post-match briefing, Rodgers said: “If the owners want me to go, I go. It is as simple as that.”

It may seem something of a knee-jerk reaction to suggest that a manager be sacked after one miserable performance. But it wasn’t just one performance, this Britannia Stadium drubbing was characteristic of Liverpool’s entire dismal season.

John W. Henry and Fenway Sports Group have a big decision to make this week and, despite his heroics at the helm in 2013/14, there has never been a better time to dismiss Brendan Rodgers as Liverpool manager.

Should Liverpool sack Brendan Rodgers after a miserable end to the season at Stoke City? Let us know in the comments below.