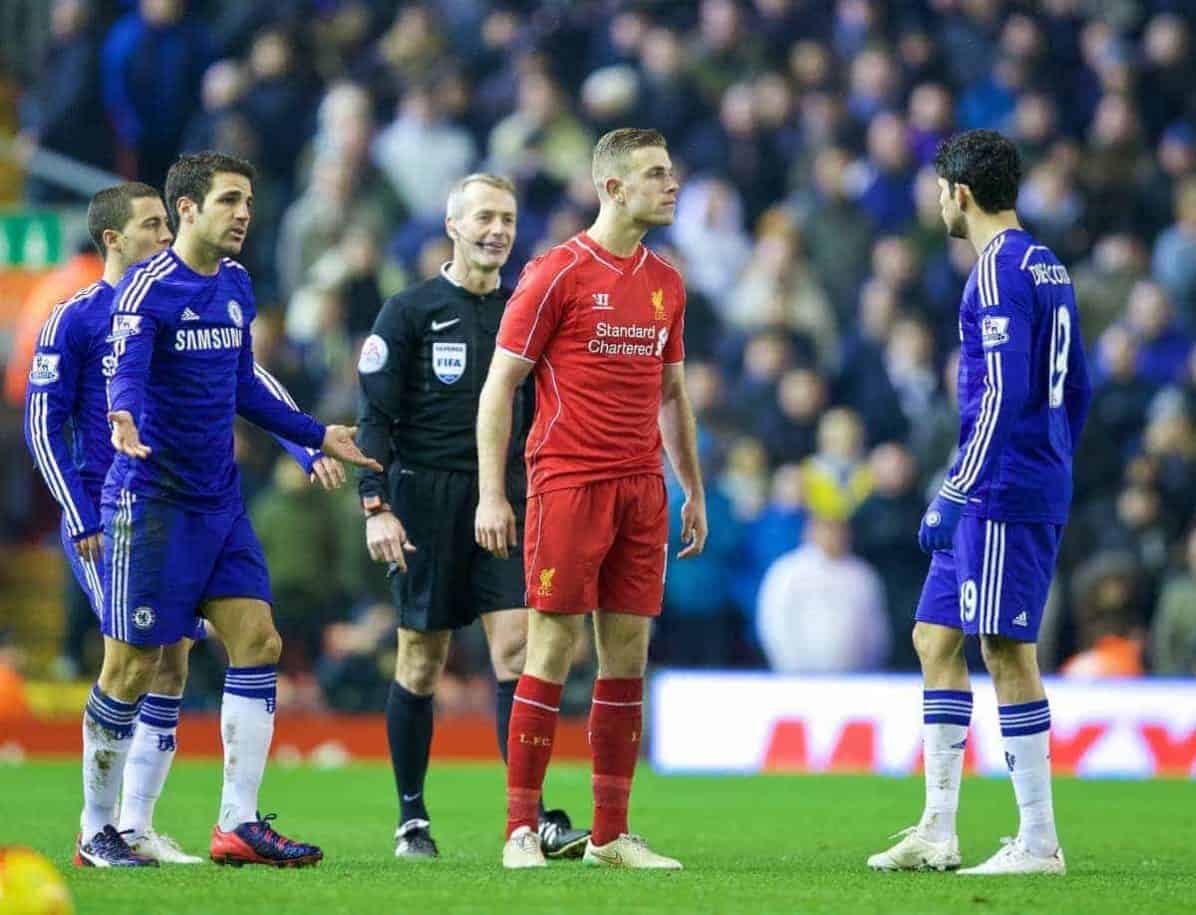 Liverpool vice-captain Jordan Henderson admits standing in a guard of honour for newly-crowned champions Chelsea should provide the players with all the motivation they need to be better next season.

Jose Mourinho’s side won the title with victory over Crystal Palace last weekend and when they run out again at Stamford Bridge the visitors are expected to offer their congratulations, as has become the tradition over recent years.

Henderson admits it will not be a nice feeling having to applaud their rivals but there is a positive to be taken from it.

“You have to respect the team because they have been the best team over the season,” said the England international.

“Of course it will be difficult doing that but you have to pay your respects.

“If that (guard of honour) does happen you have to remember the feeling that it is what we want to achieve.

“You have to bottle that and make sure next season we can have a really good go and use it as motivation and drive to push on.”

By the time Liverpool arrive in west London their top-four hopes could have diminished further if Manchester United can pick up three points against Crystal Palace at Selhurst Park 24 hours earlier.

It would mean the gap before kick-of would be seven points, necessitating a victory at a ground where they have lost 12 of their last 18 league meetings.

The criticism of Brendan Rodgers’s side this season is they have failed in the big games, having lost at home to Manchester United and away to Arsenal when the top four was within their grasp and then thrown away a lead to lose their FA Cup semi-final against Aston Villa.

Liverpool have met Chelsea three times already this season, having lost a two-legged Capital One Cup semi-final, but Henderson insists they have the character to get results against their top-four rivals.

“I felt we did well at their place in the Capital One Cup – and here (Anfield) – against them,” he added.

“Both legs I felt we performed well and probably deserved to go through but at the end of the day they went through and eventually won it.

“When we go back there we have to play the same way we did the last time we were there and if we do we have a good chance of getting something out of the game.”

In the wake of Chelsea‘s title celebrations Mourinho gave his players an extended break but Rodgers does not believe that will benefit his side.

Liverpool’s guard of honour for Chelsea may hurt, but it has to be done

“I think Chelsea‘s days off are absolutely irrelevant to our preparation,” said the Reds boss.

“Our job is to go there and keep the pressure on Manchester United and we can only control our own performance level and look to win the game.

“I think they have had a few days off but they deserve it, they’ve won the league and can celebrate that.

“But they are professional players and every game will be important for them.

“Sometimes the break can reinvigorate you. Jose might find he wants to play some young players, who will have a motivation to want to play well.

“Whatever team they play they will be looking to win the game.”

While Chelsea and Liverpool looked well-matched in their cup encounters back in January just over three months later the Londoners have wrapped up the title with games to spare while their opponents’ top-four challenge has faltered.

Rodgers insists, however, it is unfair to make comparisons. “There is not an issue on terms of why we have gone in separate directions,” he said.

“We are at a totally different stage, they have something which has been in place for many years.

“You only need to look at Chelsea in the last 10 years to understand that they are the most successful club in the country in terms of trophies and they have world-class, experienced players.”

Irrespective of that, there is the feeling Liverpool have blown their chance having recovered from a shaky start to be just two points off the top four before they hosted Manchester United in late March, and then slipped up again recently with a draw at West Brom and defeat at struggling Hull.

“When you look at games where you have dropped points it can be frustrating and disappointing but every team will do that, look across the season and think ‘What if?'”, said Rodgers.

“It is where you are at and we have the opportunities to gain the points “We are four points behind and we have to do everything we can.

“It will not always be in the upward trajectory every single year. Certainly we will benefit from this season, however it finishes.”