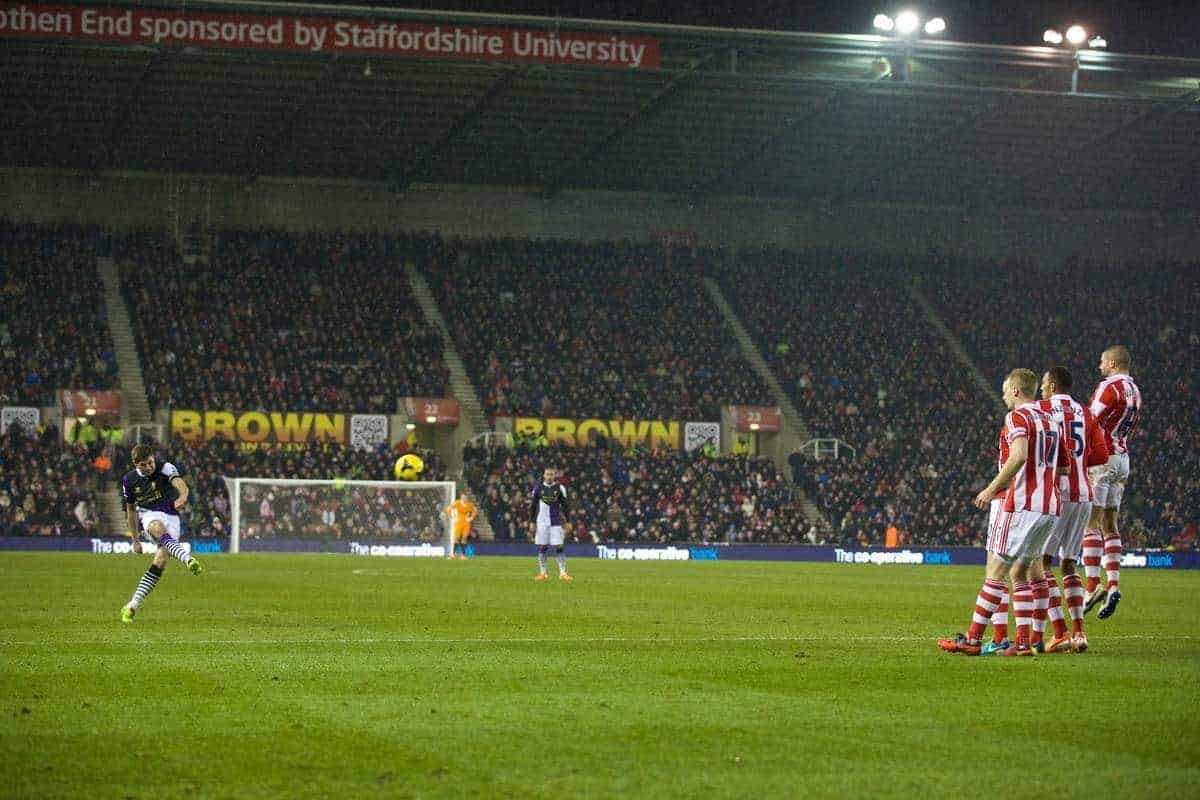 Liverpool travel to the Britannia Stadium on Sunday afternoon to play the final game of a hugely frustrating season. Ben Twelves takes a look at the team selection options against Stoke City. The curtain comes down on a disappointing season for the Reds as they take on Mark Hughes’ men in the final encounter of the season this weekend, when victory would cement a fifth place finish.

It’s certainly not the league position that was hoped or wanted at the beginning of the campaign, and it’s a finish that sees Brendan Rodgers and his squad fail to achieve yet another season target on the long list – something that is sure to be high on the agenda in the post season review that looms for the Northern Irishman.

Rodgers’ side could still drop to a lowly seventh place however if Southampton and Tottenham win their respective games and the Reds have another unhappy trip to a ground where they have won just once in six Premier League visits – although Liverpool have won all of the last three matches between the two sides.

Rodgers: "Our season doesn't finish until the whistle blows on Sunday. We want to finish strong. That's our ambition at Stoke."

With the game being the last time Steven Gerrard will ever take to the field as part of a Liverpool XI, the Reds will unquestionably be looking to make amends for last week’s horror show in front of the Anfield crowd, and produce a far better performance and result for the departing Captain in front of the 2,800 strong travelling Kop.

The Reds will once more be without sidelined duo Jon Flanagan and Daniel Sturridge who both face lengthy spells out, but Mamadou Sakho could make a welcome return to matchday involvement for the first time since the FA Cup quarter-final replay win against Blackburn Rovers.

Rodgers: "If Raheem is fit, which he is, he will be available to play on Sunday. It doesn't change my approach to him. He's a good kid."

Mario Balotelli is a doubt for the last day clash against Hughes’ side, and the Italian’s absence again leaves the Reds desperately short of attacking options, especially if Rodgers chooses to leave Raheem Sterling – who is fit and available for selection – out of the firing line as his transfer-saga rumbles on, which would likely result in Rickie Lambert starting up front.

Squad members such as Joe Allen and Lucas Leiva, who could make his Reds farewell ahead of a possible summer exit, will be hopeful of receiving match minutes ahead of academy graduates in midfield.

The same applies to the Reds attacking options with Lazar Markovic hopeful of returning to the squad after two games of being left in the stands, but with Adam Lallana having netted last time out and Coutinho a first choice pick, the only attacking question mark is over whether Sterling plays or is hidden away, and who features in his absence.

Against all odds, Rodgers reverted back to the 3-4-2-1 system for the dismal defeat to Crystal Palace last week, just when it looked like we had seen the last of the shape, and the Reds manager could utilise it again on Sunday.

Within the shape, Sakho would ideally come straight back into his left centre back role where he has undoubtedly been missed, though the Frenchman’s fitness will dictate any instant return meaning the calamitous Dejan Lovren could keep his shirt despite a disastrous performance last week.

Rodgers could make an important change to his midfield where he could reintroduce Lucas Leiva for extra physicality in the middle of the park alongside Jordan Henderson, with Jordon Ibe and Alberto Moreno either side of the central duo.

That would see Gerrard move into the front three to play alongside the Brazilian magician and Lambert, who could come in to replace Sterling and make what may be his final Liverpool appearance.

Those two changes would see the Reds line up like this on Sunday afternoon: That said, Rodgers could also choose to begin the match in the 4-3-3 shape before inevitably making numerous in-game formation switches.

In the back four shape, the same defensive options would start with Emre Can and Moreno filling the full-back positions either side of a Skrtel-Lovren central pairing, which would allow for a midfield three of Gerrard, Henderson and Coutinho to play ahead.

With mobility needed in attacking areas both wide and centrally in the shape, Lallana and Ibe should occupy the wide roles in support of Sterling, who should play as a striker and show the watching world and those he wants away from just how deserving of a summer move his talent is.

In the 4-3-3 formation, the Reds could line up looking like this come 3pm kick-off time on Sunday afternoon: The end of a disappointing campaign has arrived, but ahead of an extremely interesting summer at Anfield, the Reds must produce a positive performance and result to end the season with a win – if only to make amends for the Captain in his last outing for Liverpool Football Club.

Fun Quiz!
How Many ’90s Premier League Stars Can You Name?
Our friends at mybettingsites.co.uk have a fantastic interactive quiz perfect for you to waste away the hours before this Sunday’s final game of the season for Liverpool.
50 Premier League players from the ’90s — the average is just 16! Can you beat it? Have a go here >>