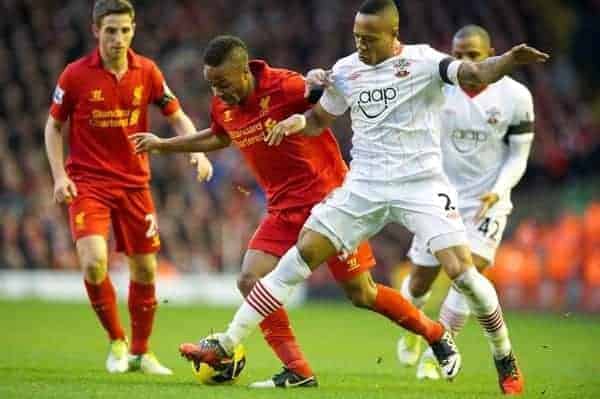 Liverpool confirmed the signing of defender Nathaniel Clyne on Wednesday morning, so here is your obligatory highlights reel…

Press Association Sport understands the 24-year-old full-back has agreed a five-year contract with the Reds paying £10 million up front with a further £2 million in add-ons.

"I'm delighted and it's a dream move for me to come here and play for such a big club with all of its history. I can't wait to get started," Clyne told liverpoolfc.com.

"As soon as Liverpool showed their interest in me, I was happy and just wanted the deal to go through.

"The gaffer has shown a lot of interest in me and this is a place where I can improve as a player, I think. It's definitely a good opportunity to come here and try to fulfil my potential.

"I've played at Anfield before and know what the atmosphere is all about. It's a great atmosphere and will make me rise to the challenge. I'm really looking forward to it and hopefully it can push me on to putting on good performances."

Clyne will join fellow high-profile new signings James Milner and Danny Ings for the club's tour of Australia and Asia.

The pair officially joined the Reds on Wednesday after their contracts expired with Manchester City and Burnley respectively.

Milner arrives on a free transfer but Ings' age (22) means the Clarets are due compensation and talks are on-going between the two clubs in an attempt to come to an agreement without the need to go to tribunal.

Liverpool today confirmed both would be on the pre-season trip for matches in Thailand, Australia and Malaysia.

Joining them will be fellow new arrival goalkeeper Adam Bogdan, whose contract with Bolton expired yesterday, although a decision has yet to be made on when Roberto Firmino, who is now on leave after playing in the Copa America for Brazil, will join up with his new team-mates following his £29million move from Hoffenheim.

Bogdan is keen to make the most of his chance having secured a move to Anfield but knows he will have to displace the established Simon Mignolet first.

"I would like to take this opportunity and play as many games as I possibly can, and be a number one 'keeper for Liverpool," he told liverpoolfc.com.

"How do I do that? I have to do it on the training ground first of all, I have to prove myself and prove to the manager that I'm able to do that then when I get the chance, I have to take it and play well. That's how it works.

"I think it's a massive challenge. I respect him (Mignolet) as a 'keeper. We're going to compete, of course, that's the nature of this position and the sport, but at the same time we are going to help each other as well."

Manager Brendan Rodgers' primary business is almost complete with just the acquisition of a striker to finalise.

The Reds remain interested in Aston Villa's Christian Benteke but despite reports suggesting a deal will be done in the next couple of days the club are nowhere near that stage as there is an impasse over the Belgium international's B£32.5million release clause, which the Merseysiders consider too expensive.

While the pursuit of a centre-forward continues attention now turns to offloading some of the unwanted players with defender Sebastian Coates first out the door.

The Uruguay international spent last season on loan at Sunderland and could complete a £4million permanent move as early as today.