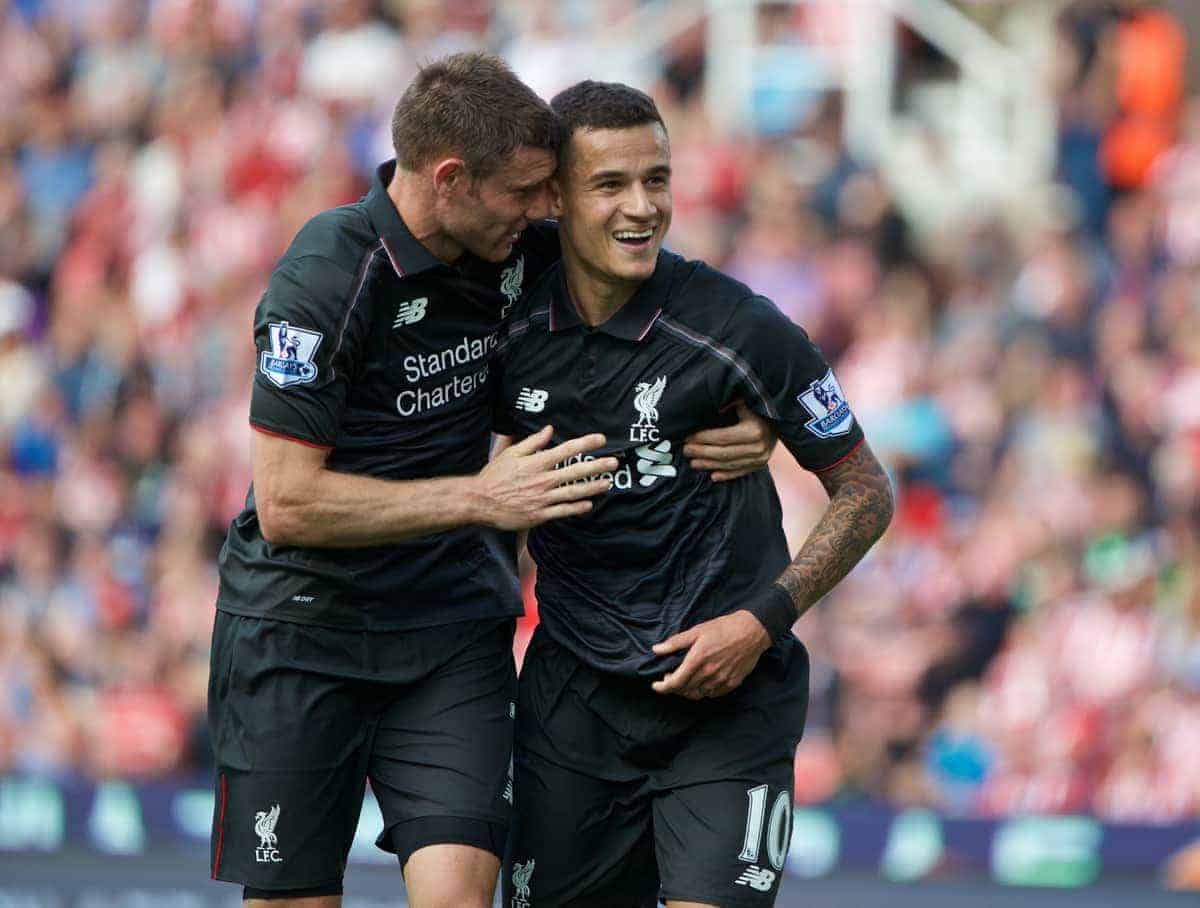 James Milner was pleased to be on the right side of a Philippe Coutinho stunner as the Brazilian launched Liverpool’s Premier League season in spectacular fashion at Stoke. Coutinho struck from 30 yards with just four minutes remaining as the Reds snatched a 1-0 victory from an otherwise drab contest at the Britannia Stadium.

It was yet another example of the 23-year-old’s deadly accuracy from long range after striking a number from distance last season.

One of those goals last term was a brilliant winner from the edge of the box against Milner’s former club Manchester City at Anfield in March – opponents he also sank the previous year.

Milner told LFC TV: “I obviously saw him do it a few times last year so to do it when he is on my time is nicer.

“That is what the game needed. It was a tough game, it was a battle. I thought we defended really well and it was going to take a moment of brilliance to win the game and we managed to get that.”

Until Coutinho’s late intervention, the game appeared to be drifting towards a goalless draw.

Both sides struggled to create opportunities although Stoke had threatened to finish with a flourish as Marco van Ginkel had a shot blocked by Martin Skrtel and Mame Biram Diouf headed narrowly wide.

Coutinho, whose previous effort moments earlier had flown well over the bar, then took charge with a run and strike that helped bury memories of Liverpool’s nightmare 6-1 thrashing on the same ground in May.

It was not a pretty performance but, after a difficult summer, that was less important than the result.

Manager Brendan Rodgers needs to stabilise the team after the high-profile losses of Raheem Sterling and Steven Gerrard, changes to the backroom staff and arrival of six new players.

The biggest positive was the performance of the back four, with centre-backs Dejan Lovren and Skrtel looking solid and new signings Nathaniel Clyne and Joe Gomez starting strongly.

Milner, signed on a free transfer from City, said: “The boys showed great character. It is never an easy place to come, especially first game of the season. Any time you can walk away with three points from here is a great result.

“I think we have got a lot of quality going forward but I think a lot of credit goes to the whole team. I think the boys at the back were brilliant.”