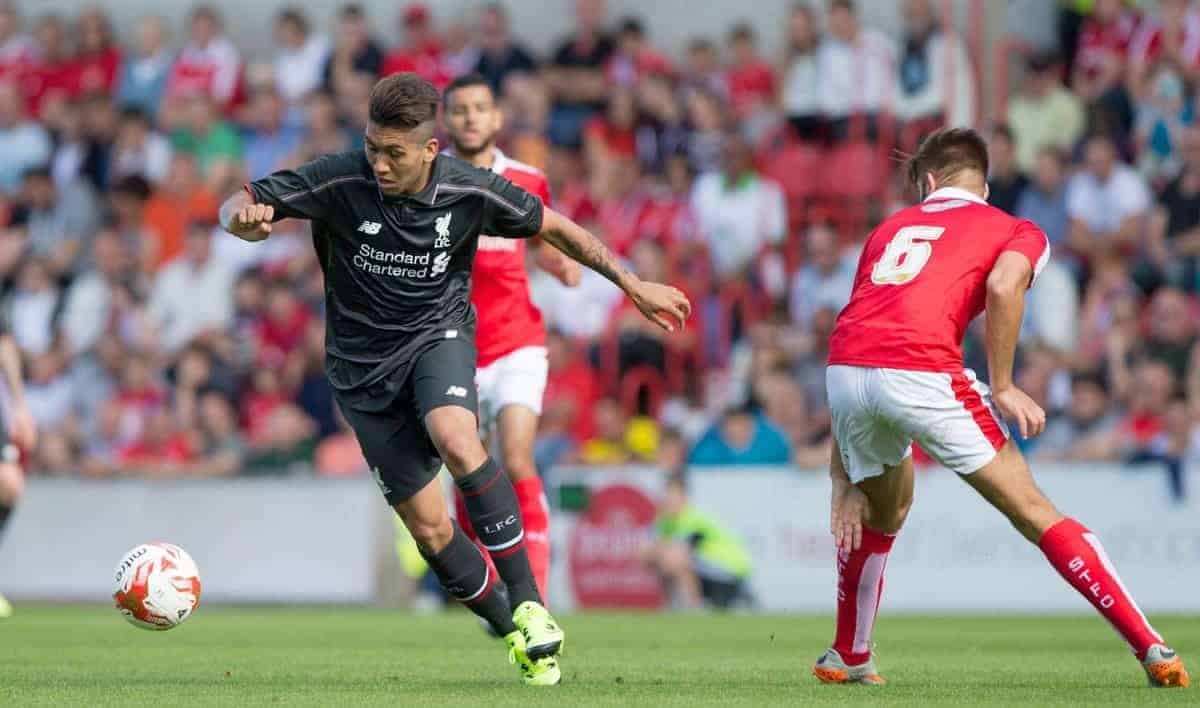 After Brendan Rodgers’ Reds rounded off their pre-season schedule with a 2-1 win against Swindon Town, Ben Twelves picks a number of discussion topics from victory.

Liverpool wrapped up their preparations for the upcoming campaign with a decent performance and victory against Swindon.

Christian Benteke fired the Reds ahead with a stunning debut goal just after half time, before Swindon equalised through Jonathan Obika’s curling effort.

Sheyi Ojo netted the Reds’ winner four minutes from time with help from U21s ‘keeper Lawrence Vigouroux, who played on trial for the Robbins, to hand Liverpool a second victory in as many days.

The League One side provided good opposition for the rest of Rodgers’ squad ahead of the season opener in less than a week, and here are the talking points from a positive afternoon at the County Ground.

Emre Can Impresses on Comeback

The German made his first appearance of pre-season in Wiltshere, where he turned in a strong performance in the Liverpool midfield.

Can returned to the Reds starting XI full of confidence after an excellent Under-21s European Championship, and it showed in a dominant performance on and off the ball in a three and two man partnership.

Emre Can has to start next week. Was very pro Lucas playing alongside Henderson and Milner, but Can is just a monster.

The German powerhouse produced a couple of his trademark unstoppable marauding runs, and he frequently joined in developing attacking play while also instigating some moves from deep in midfield alongside Lucas Leiva.

His passing was tidy and crisp and he went close with two well struck efforts first half, but it was his energy and dynamism that sparked injection into the Reds transitions from defence to attack that really caught the eye.

It was a very polished all-round performance from Can, who Rodgers must find a place in his starting XI for.

Christian Benteke Nets Wonder Goal but Still Work To Do

The big Belgian opened his Reds account in spectacular fashion at the County Ground but showed there is still plenty of improving to do.

For a large part of his 67 minutes on the pitch, Benteke was very much on the fringes of the action, despite netting with a sensational volley, with his forward movement at times too static.

Benteke provided a good springboard for attacks to be created off on occasions as he dropped to link with the attacking midfield, but when play was developing behind him, opportunities to create were passed up due to a lack of forward movement from the new arrival.

Rodgers: It was a really good fitness exercise and Christian Benteke’s goal was amazing, whether it’s in a friendly or elsewhere.

Alongside dropping deep, he pulled wide well too which allowed Firmino to run untracked from midfield and receive possession in dangerous areas, but when the focal point, he offered a limited presence which hindered play in and around the box at times.

The Belgium international saw a second goal ruled out for offside and missed a sitter as he provided a welcome presence in the box, but while overall is was a positive debut there’s work ahead to do.

The Brazilian slotted in seamlessly from the off – conducting acting play from wide and centrally immediately – and it took him no time at all to display why Rodgers parted with £29million to bring him to Anfield.

Instantly he showed his attacking intent and desire to run behind, and almost grabbed his first Reds goal in the opening two minutes by doing so after latching onto Lucas’ pass over the top in which he was brought down and should have won a penalty.

His touch, movement and distribution was immaculate throughout and in a fluid attacking system, and he was central to everything the Reds did going forward, especially in a brilliant first 45.

Alongside his work on the ball, the 23-year-old caught the eye with his work-rate and pressing – something which saw him carve a clear cut chance for Christian Benteke, who produced a weak finish from Firmino’s cut back after he robbed possession.

It was a really exciting first 67 minutes from Firmino and the Brazil international showed exactly what he will bring to the Liverpool side this season.

The Portuguese play-maker has had limited action in pre-season, and he made up for lost time with an eye-catching display on Sunday.

Replacing Joe Allen after 13 minutes, Teixeira – occupying a role on the left of Liverpool’s attack – produced a good display with his creation in advanced areas a real positive feature of the Reds offensive performance.

He almost broke the deadlock with a superb strike first half; a period which saw him produce some lovely interchanging football with fellow attacking midfielders Firmino and Lazar Markovic, before he set-up Benteke for the striker’s superb opening goal.

The 22-year-old linked well numerous times down the left with Alberto Moreno too, and he proved a tough customer to deal with for the Swindon backline when drifting inside, with his intricacy and control in and around the box which saw him carve out a number of opportunities.

It was an excellent performance from the Portugal U21 international and he provided Rodgers with another reminder of his talents.

The talented teenager may only have been on for the final 23 minutes, but he wasted no time in making his mark with an excellent cameo display.

Replacing Firmino in attacking midfield, the lively Kent, who was full of confidence, immediately caught the eye as he impacted the game from the second he entered proceedings.

The 18-year-old created much excitement with his pace and dribbling, but his control and one-and-two touch game really impressed, as he looked to play both the creator and finisher – though he was denied finding the net when he was fouled when through on goal.

Kent displayed some superb technical play in tight areas, but also showed his awareness with some sublime first time passing, and an outstanding dummy from Teixiera’s pass that allowed Moreno a chance which the Spaniard should have done better with.

It was a very promising display from Kent, who showed that he can become another one for the future at Anfield.