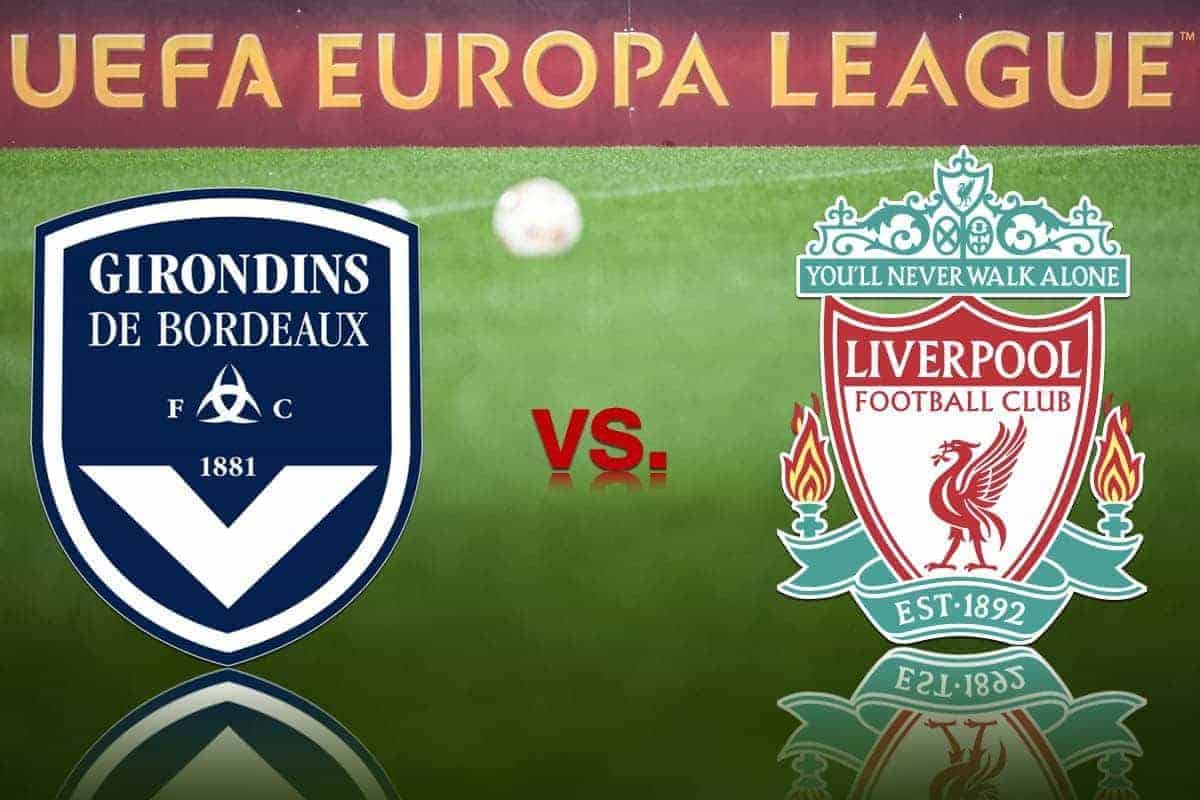 Brendan Rodgers will be looking for a positive response from his Liverpool side as they travel to the south of France for the first game of their 2015/16 Europa League campaign against Bordeaux.

After consecutive losses in the Premier League the Reds are left deflated, and victory at the Nouveau Stade de Bordeaux would be the first step towards improvement for Rodgers.

But what can Liverpool expect from Bordeaux on Thursday night?

We spoke to French football expert Andrew Gibney to get the lowdown on Willy Sagnol’s side.

It certainly hasn’t been the ideal start for Les Girondins, but the 2-0 home win over Nantes and Friday’s 2-2 draw with PSG in Paris has given the home fans enough hope that they have a chance in the Europa League.

Injuries to Cedric Yambere, Lamine Sane, Gregory Sertic and Cheick Diabate have hampered their start, but youngsters like Enzo Crivelli, Milan Gajic and Frederic Guilbert have come in and impressed.

“This is a young person who is in the midst of learning. It is only at the beginning, but I know he knows it. He has to work hard.
[…]
Enzo is one of the players [for] the future. [This] future [is] not necessarily very close but in the medium term he is a player who will bring something to Les Girondins.”

Who stand out as key players within Willy Sagnol’s squad, and what would your predicted lineup be?

Whabi Khazri, the playmaker of this Bordeaux side, has started the season well.

If he plays well, his enthusiasm is infectious and can inspire their better performances.

He is deadly from free-kicks, and all set-pieces, but his ability to float around the attack, find pockets of space and drive at the defence will cause Liverpool problems.

It has been a good start to the campaign from Wahbi Khazri, and Bordeaux’s attacking midfield was the catalyst for their excellent performance at the Parc des Princes.

His endeavour and determination to push forward helped pile the pressure on the PSG defence. Khazri’s set pieces were a constant menace throughout the game—helping Bordeaux draw level after 31 minutes.

Then, after Trapp took too much time on the ball, it was Khazri who stole the ball off the ‘keeper to score the equaliser.

Nicolas Pallois will be a rock in defence, and Crivelli has goals in him – and is certainly due one this season.

“With Cedric Yambere and Lamine Sane missing, Pallois took up the role of leader at the back and did a fantastic job.

His excellent display was summed up in the second half when he made two excellent blocks to thwart PSG and keep the score at 2-1. The Bordelais Wall was magnificent and a huge reason behind his team’s deserved away point.

What style of play can we expect from Bordeaux at home?

Expect the home side to try and keep it tight throgh the centre and hit down the flanks with pace.

Gajic will bomb down the right and Nicolas Maurice-Belay and Henri Saivet will look to hit on the break.