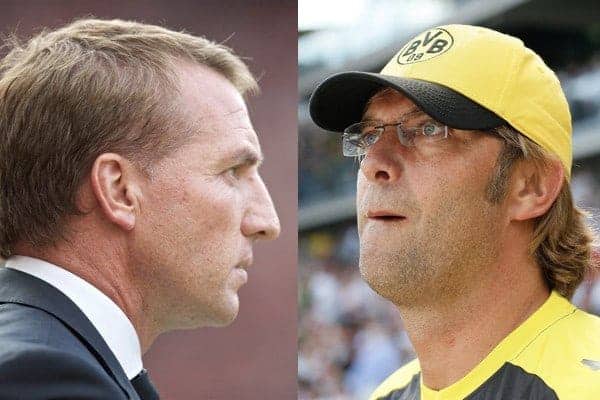 With many questions surrounding Liverpool right now, we take a look at the betting markets for an indication of where gamblers are putting their money on Liverpool’s imminent future.

The tension levels for Liverpool and their fans were turned up on Saturday with their 3-1 defeat at Manchester United, a second consecutive defeat, shipping six goals in the process.

Many fans who hadn’t already turned on Brendan Rodgers now have, and the Reds face a period of severe scrutiny, particularly if results continue to go the opposition’s way.

Rodgers was given the backing of the club’s owners in the summer, despite a sour season that concluded with a humiliating 6-1 defeat at Stoke City on the final day of the season.

New coaching staff appointed and £78 million of transfer spending later and the Northern Irishman finds himself back in the spotlight.

Rodgers is favourite to be the next Premier League manager to be sacked with the bookies at 5/4.

As in the summer, former Borussia Dortmund boss Jurgen Klopp is favourite to be Liverpool’s next manager at 7/4. The German is yet to join a new club since quitting the Westfalenstadion at the end of last season.

If Rodgers is to remain in the Anfield hot seat for the foreseeable future, his first trophy couldn’t come at a better time.

Liverpool get their Europa League campaign underway at Bordeaux on Thursday evening, before facing Carlisle in the League Cup third round on Tuesday.

Liverpool will be keen for a morale-boosting victory in Bordeaux on Thursday, ahead of Sunday’s Premier League visit of Norwich City.

All eyes will be on Rodgers and his side to find success in Europe after a drab Champions League campaign last season.

Philippe Coutinho returns from suspension for Liverpool, but Jordan Henderson, Adam Lallana, Joe Allen and Daniel Sturridge are all injured.

Let us know what you would bet on from the above in the comments section below. You can also tell us on Twitter @thisisanfield: Follow @thisisanfield