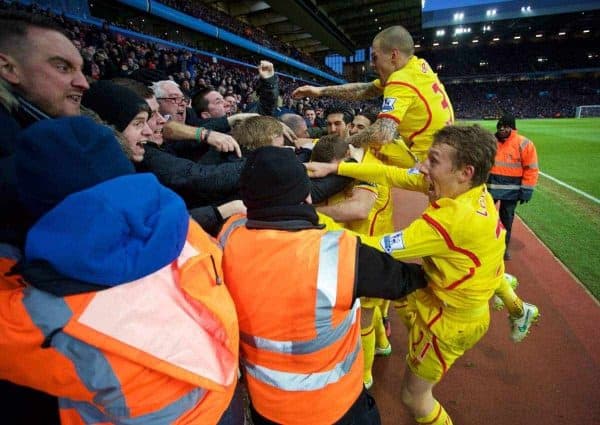 Despite being a largely disappointing year on the pitch for Liverpool FC, there have been some memorable moments and fantastic photographs that have captured those in full flow.

We’ve browsed our archive to pick our 15 favourites from 2015.

Liverpool celebrate doubling their lead at Southampton as a Kopite is thwarted in his attempts to join in:

Steven Gerrard takes the acclaim after scoring the final Anfield goal of his Reds career vs. Queens Park Rangers:

An emotional Gerrard on his final appearance for the club against Stoke:

The calm before the storm – an empty Anfield awaits its first action of the 2015/16 season as the new Main Stand construction looms over:

A picturesque and atmospheric Kop in full voice ahead of the first home game of the 2015/16 season against Bournemouth:

Anfield pauses for a minute of silence ahead of kick-off against Norwich City:

The Reds huddle at home to Carlisle United in front of the famous Kop flags:

Adam Lallana collapses into the arms of Jurgen Klopp after an exhausting performance against Tottenham in the German’s first outing as Reds boss:

Elation on the face of Lallana as he celebrates Philippe Coutinho scoring against Man City:

The Reds celebrate in front of the travelling Kop in the 6-1 League Cup demolition of Southampton:

Which is your favourite photo of 2015? Let us know in the comments below!

* All pictures via our excellent photo provider, Propaganda-Photo.com.