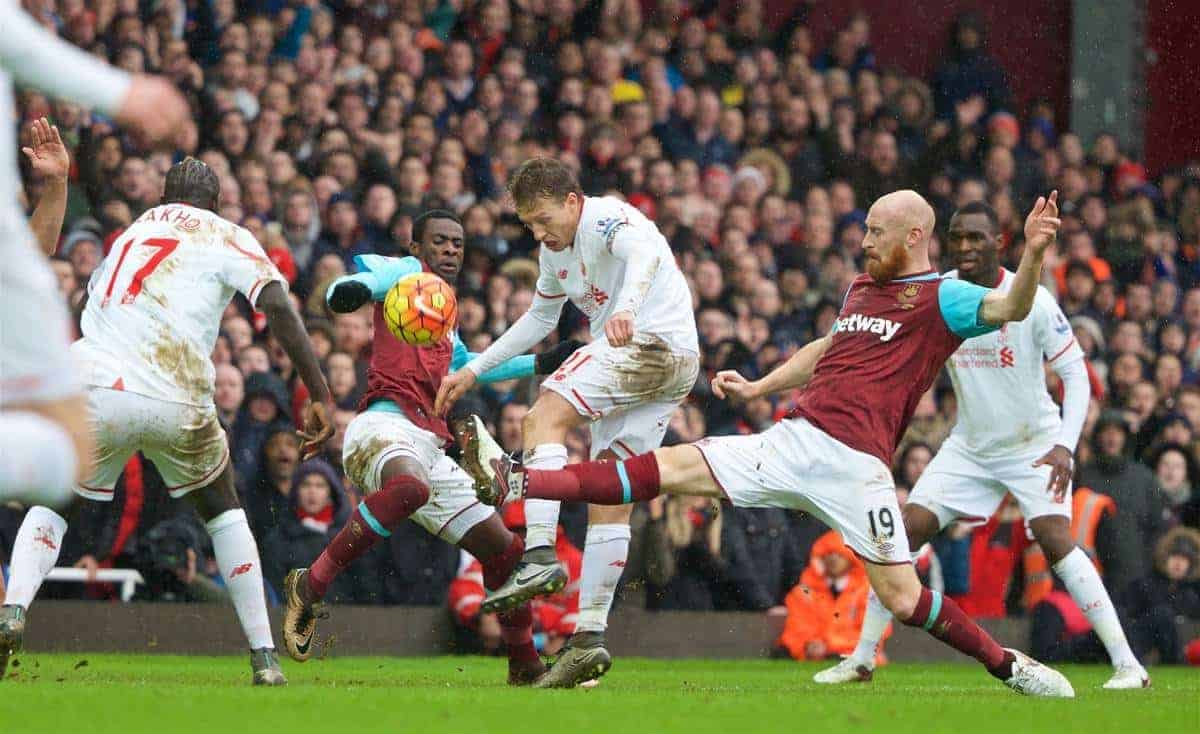 Liverpool continue in cup action on Saturday when they take on West Ham at Anfield in the fourth round of the FA Cup. Buoyed after reaching Wembley for a shot at League Cup glory, Jurgen Klopp’s Reds turn their attention back to their quest for FA Cup success against the Hammers.

After successive exhausting games against Norwich City and Tuesday night’s shootout win over Stoke City, Klopp will hope for a more straightforward route to the fifth round against Slaven Bilic’s men, as the German looks to avoid adding a replay to the already hectic fixture schedule.

But a tough game awaits against the Upton Park side, who have enjoyed the upper hand over Liverpool in recent times, and arrive at Anfield in search of long-awaited FA Cup revenge for the Reds’ memorable Millennium Stadium triumph in 2006.

But the Reds recent overall record is less impressive, having lost three of the last four clashes with the Londoners, including surrendering a 52-year unbeaten record at Anfield last August.

Bilic’s men ended the wait with goals from Manuel Lanzini, Mark Noble and Diafra Sakho sealing a 3-0 win on a forgettable afternoon that also saw Philippe Coutinho sent off. The Reds have never lost in the FA Cup to the Hammers, winning both of the two previous Anfield cup fixtures – the last of which came in 1963 as Bill Shankly’s men won 1-0 in the sixth round via Roger Hunt’s strike.

The last meeting in the competition between the clubs was the unforgettable “Gerrard final” when the Reds lifted the trophy after a shootout win almost a decade ago.

West Ham come into the game in strong overall form – losing just once in their last 11 matches in all competitions.

Bilic’s men recorded four straight wins in that time – including eliminating Championship side Wolves in the third round – but they’re winless in their last two after losing to Newcastle United and drawing with Man City.

The Hammers have picked up some impressive results on their travels, winning at Arsenal, Man City and Anfield already this season – something they look to replicate on Saturday evening.

Klopp’s side arrive boosted by securing their Wembley visit in midweek, but still in indifferent form with two wins, two draws and two losses from their last six games.

The Reds have won just once at Anfield since Boxing Day – that in the third-round replay with Exeter – in a record they must improve starting on Saturday.

Liverpool are evens to beat West Ham, with the draw at 23/10 and a victory for the away side at 5/2.

Roberto Firmino is nicely priced at 4/1 to be the game’s first goalscorer. Use betbind.com to keep track of all your bets this weekend.

Bilic arrives on Merseyside missing some key men and is set to make changes to his side.

Former Red Andy Carroll is one of those out, with the powerful striker set to miss a return to L4 due to a knock, while Diafra Sakho and Manuel Lanzini – who both scored in the August Anfield success – are also sidelined.

Carl Jenkinson is a doubt with the defender waiting on results from a scan, and new signing Sam Byram is unable to deputise due to being cup-tied having featured for Leeds.

Positively for Bilic, James Tomkins is fit and could make an immediate return at right-back while his captain, Mark Noble, is set to shake off flu in time to lead his side out.

Ex-Red Victor Moses is pushing for a start ahead of Michail Antonio, while Nikica Jelavic, Angelo Ogbonna and Pedro Obiang will all be hopeful of recalls to the starting XI.

The Reds will need to be better prepared for a physical battle than they were in London four weeks ago, while service from wide areas to Christian Benteke will also need to improve in order for victory against Bilic’s side.

Klopp spoke of his desire to avoid a replay and team selection in his pre-match press conference:

“I don’t want a replay – I would like to win without a second game!

“It was an intensive games against Stoke. We broke all records for distance covered. We cannot ignore this, we will not ignore this.

“We will make changes but only because we want to win the game. Last FA Cup game against Exeter was great – the boys will give everything.”

Prior to his second Anfield visit as Hammers’ boss, Bilic said:

“We have a big FA Cup game on Saturday and we have one of the most difficult draws we could get.

“Our results against Liverpool this season give us confidence, but it is still Liverpool away.”

Anfield’s second cup clash in five days will be shown live on BT Sport Two in the UK and can be watched in all corners of the globe on channels such as SuperSport3, Viasat Sport, beIN Sport, Fox Sports 2 & ESPN2.