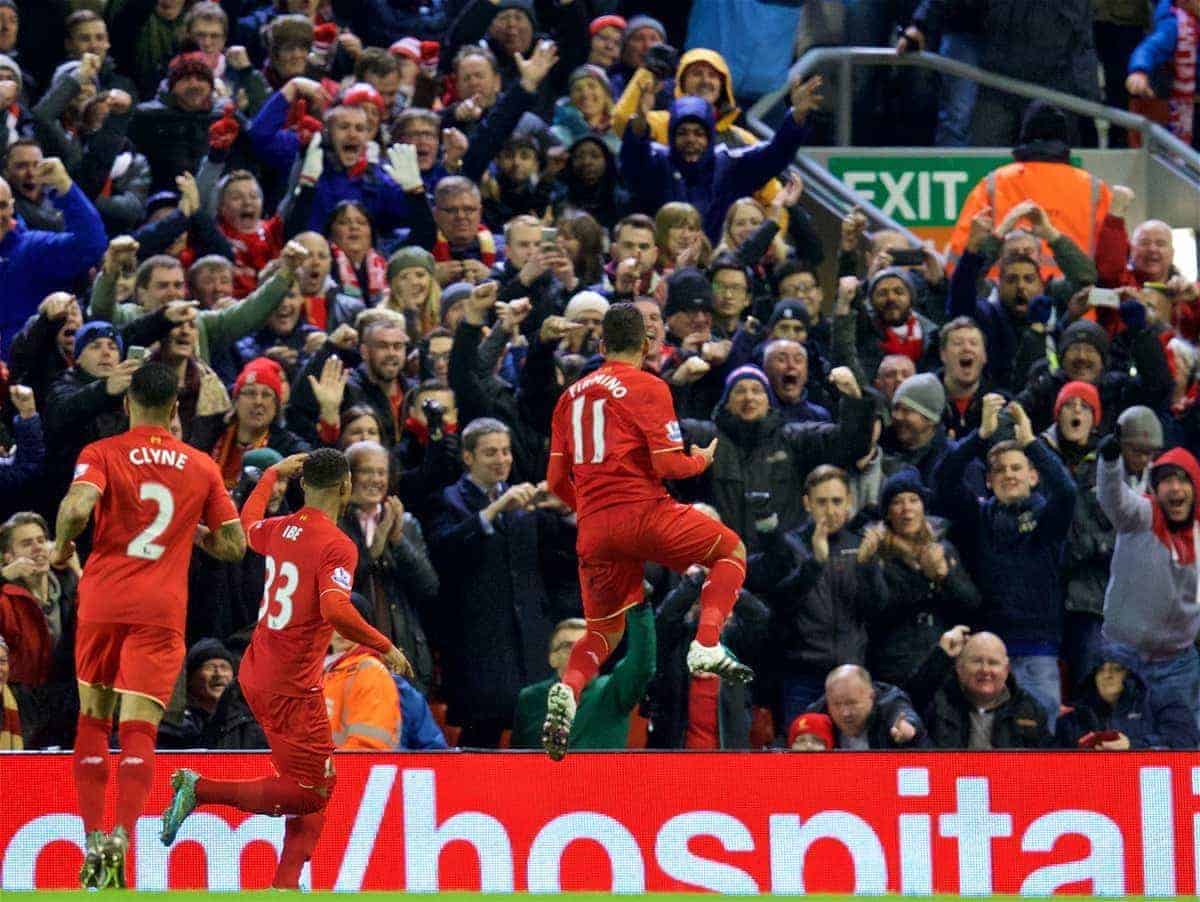 A late volley from Joe Allen earned Liverpool a vital point in a sensational night of football, as the Reds drew 3-3 with Arsenal.

After a hard-fought 2-2 draw away to Exeter City in the FA Cup third round on Friday night, Liverpool returned to Anfield and the Premier League, taking on Arsene Wenger’s Arsenal.

With the Gunners topping the table heading into this clash, the onus was on Jurgen Klopp‘s Reds to topple their confident opposition.

Klopp made 11 changes to the inexperienced side that drew at St. James Park, with Mamadou Sakho, Jordan Henderson and Jordon Ibe all returning from injury in a 4-2-3-1 formation.

Up against a strong Arsenal lineup, Liverpool had their work cut out for them.

After a high-tempo start that saw Emre Can reign supreme in midfield, Liverpool had a penalty shout turned down, with Adam Lallana running into Per Mertesacker in the box.

It wasn’t long before Liverpool had their goal however, with Roberto Firmino firing home between Laurent Koscielny’s legs to put his side 1-0 up after Can’s curling effort had been palmed out by Petr Cech.

Disappointment came soon for Klopp as within minutes Arsenal had drawn level, with Aaron Ramsey netting the equaliser after some weak defending from Mamadou Sakho, who had just suffered a blow to the head.

Liverpool kept up their pressing game despite this setback, and looked to regain momentum immediately.

James Milner led the charge as the Reds pushed forward, and it was the England international that made his side’s second, applying some trademark industry before laying the ball off for Firmino.

The Brazilian did the rest, curling an incredible strike up and over Cech and into the Arsenal goal.

Not content with allowing the majesty of Liverpool’s attack thrive, some more poor goalkeeping from Mignolet saw Olivier Giroud equalise with a flick-on from an Arsenal corner, with returning loanee Danny Ward watching on from the substitutes’ bench.

Giroud then had the opportunity to put Arsenal ahead with a tap-in, but hit a point-blank effort across goal, with Liverpool able to clear.

Both sides maintain their intensity throughout the first half, with Firmino hitting the bar late on, but Liverpool and Arsenal went into the interval with the scores level.

Firmino almost turned provider early into the second half, laying the ball off to Alberto Moreno, but the Spaniard blasted his close-range attempt well over.

After a low-key start to the half however, it was Arsenal who provided the first moment of magic, with Giroud hooking home to put his side 3-2 up, with Klopp furious on the touchline as the Frenchman was allowed to turn too easily in the penalty area.

Not content with Arsenal claiming dominance, Liverpool continued to push forward, but sloppy passes saw the buildup dissolve in the attacking third with worrying regularity.

With his side floundering, Klopp rolled the dice and brought on Christian Benteke, with the Belgian taking Milner’s place.

Deployed in an attack-heavy setup, Liverpool applied heavy pressure towards the Arsenal penalty area following Benteke’s introduction, with Firmino continuing to shine on and off the ball.

Arsenal made changes with 15 minutes to go, with Wenger bringing on both Alex Oxlade-Chamberlain and Kieran Gibbs.

This seemed to upset the Gunners’ balance however, and Liverpool continued to push for an equaliser.

Desperate to level things, Klopp made an intriguing substitution in the dying stages, bringing on new signing Steven Caulker for Lallana, fielding the centre-back in an unfamiliar role up front.

In the end, it came from the unlikeliest of sources, with Joe Allen volleying home from close range as the game headed into injury time.