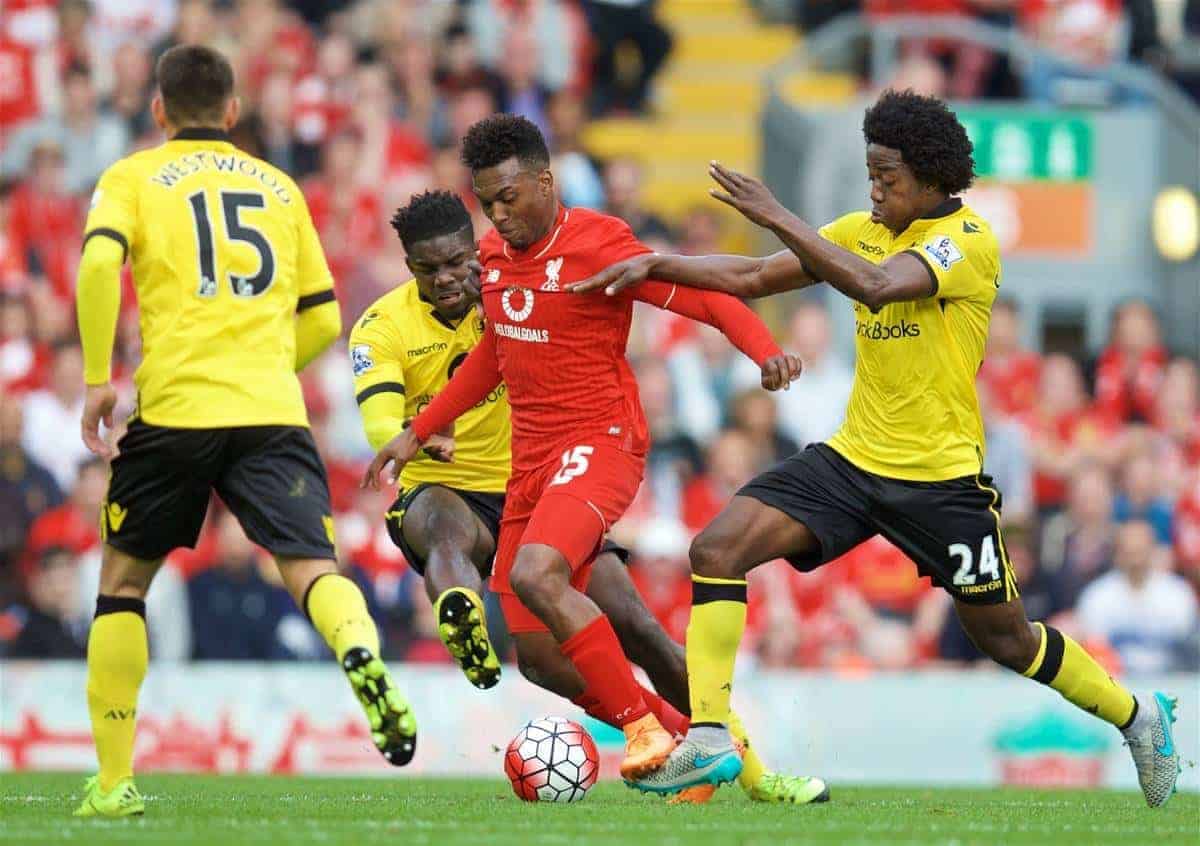 Liverpool travel to relegation favourites Aston Villa in the Premier League on Sunday, with the Reds looking to bounce back from Tuesday’s FA Cup defeat at West Ham.

The loss to the Hammers was another low point in an increasingly average season, although the return to first-team action of Daniel Sturridge and Philippe Coutinho was the big positives from the game.

The attacking duo both looked sharp at Upton Park and could play key roles against Villa this weekend – although whether either are risked from the start seems unlikely.

Liverpool’s league campaign already feels doomed, unfortunately, and it really is a case of now trying to finish as close to fourth as possible.

It will be intriguing to see whether Jurgen Klopp decides to stick with some of the youngsters who performed so admirably against West Ham, or whether he recalls his more experienced players.

How have the Reds fared at Villa Park?

Liverpool have a very impressive away record against Villa in the Premier League era, with the Reds’ last defeat there coming in May 2011.

Even that game was something of a dead rubber at the end of the season, though, with former Liverpool man Stewart Downing scoring the only goal of the game.

Prior to that, Villa’s last home league win against the Merseysiders was in February 1998, thanks to two goals from another ex-Red, Stan Collymore.

Last season’s clash in the Midlands was not only memorable because of Brendan Rodgers’ side’s 2-0 victory, but also for the incredible celebrations following Rickie Lambert’s match-clinching strike.

Other moments that stand out for Liverpool at Villa Park over the years are Steven Gerrard’s late free-kick in 2007/08, and an expertly-taken Sturridge winner back at the start of the 2013/14 season.

A repeat of this excellent recent run would be greatly appreciated on Sunday.

Liverpool go into the game in a poor run of league form, with just one win in their last six outings.

They have drawn at home to Sunderland and lost against West Ham and Man United in that time, with the solitary win coming in the dying seconds at Norwich City.

Klopp’s men have been inconsistent all season long, and there has never been any sign of them putting a string of victories together. Sunday would be the perfect place to start.

Villa, meanwhile, are rooted to the bottom of the Premier League table, and look almost certain to be playing Championship football next season.

Remi Garde’s team have actually been in fairly decent form of late, though, losing just one of their last five and beating Norwich at home in their last match.

They are eight points adrift of safety, and another win on Sunday is much-needed. In fairness, there could be worse sides to be facing than Liverpool on current form.

Despite their recent slump, Liverpool are still unsurprising favourites to come away from Villa Park with all three points on Sunday.

The Reds are 4/5 for the victory, a draw is 13/5 and Villa are 10/3 to win. Among the football betting tips this weekend, Daniel Sturridge is priced at 10/7 to score anytime.

Garde’s men are 1/25 to be relegated this season, which says everything you need to know about their current plight, while Liverpool are a rather depressing 20/1 to finish in the top four.

Villa don’t have too many injury concerns to deal with ahead of the weekend showdown, although Rudi Gestede, Carlos Sanchez and Alan Hutton are touch and go with hamstring problems.

Former Liverpool man Aly Cissokho will face his former club, with the left-back almost a forgotten man of the Reds’ unforgettable 2013/14 campaign.

The left-back has nailed down a place in Villa’s starting eleven, and should start in a back-four also containing Jores Okore, Joleon Lescott and Micah Richards.

Gabriel Agbonlahor has seemingly been a Villains player for an eternity, but the English striker is still only 29 years of age.

He scored his first goal of the season last weekend against Norwich, and although he can be erratic, his pace will cause Liverpool’s defence problems.

In truth, this is a Villa side lacking in quality, and their dire league position is proof of that. Should the Reds fail to win, it would be a major disappointment.

Klopp focussed on the progress of Sturridge, saying that although the Englishman is in good shape, he must be careful in terms of not overplaying him.

“He played about 70 minutes [against West Ham], so he had a normal recovery after. He feels good, I heard nothing else.

“We have to think about how we can manage the minutes, but he took a big step in the last week of course”.

The German also stood up for much-maligned striker Christian Benteke, who could face his former club on Sunday.

“I saw really good signs against West Ham. Having this number of opportunities is a good sign. But it’s not too easy.

“I talked to him, a few times, gave him some advice as a human being, as a coach.

“He’s really trying to come back in an easy moment.”

Norwich was only three points on a long road for us. Now we have to focus on the next game.

Jurgen Klopp is a top manager. He has a good personality. He is genuine, which I like. Liverpool have quality and quantity in the forward positions. They like to play attacking football.

I know it is Valentines Day on Sunday. Unfortunately for my wife we have a game.

Sunday’s clash is sandwiched between two vital top-of-the-table clashes, with Arsenal hosting Leicester City at 12pm and Tottenham‘s trip to Man City kicking off at 4:15pm.

The Liverpool game is on Sky Sports 1, as are the other two, and will get underway at the rather peculiar time of 2:05pm.