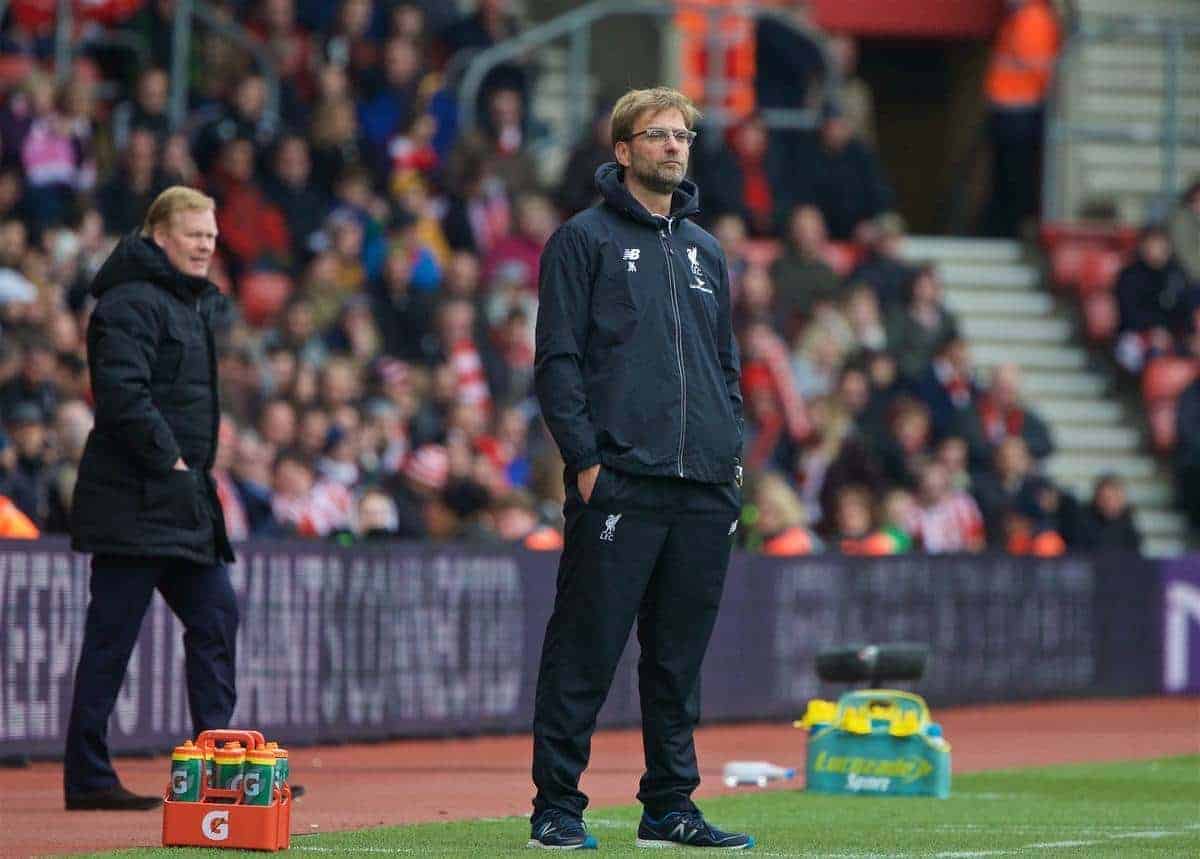 After Liverpool threw away a two-goal lead to fall to an appalling 3-2 loss at St Mary’s, we round-up how the media reacted to the collapse.

Liverpool’s winning run came to an abrupt end on the south coast as Jurgen Klopp’s side surrendered a two-goal lead to return to Merseyside empty handed.

First half strikes from Philippe Coutinho and Daniel Sturridge looked to have put the Reds well on the way to a fourth straight league win, but a shambolic defensive display after the break and goals from Graziano Pelle and Sadio Mane ensured there would be no repeat of the 6-1 League Cup hammering that for a moment looked realistic.

Capitulating from such a commanding position, it was a woeful afternoon for the Reds and one that could prove extremely costly with the loss to Ronald Koeman’s side putting a sizeable dent in Liverpool’s increasingly faint top four hopes.

The pain will linger for a while as the domestic season now pauses for an ill-timed international break, and here is how the media reacted to the game. There was much focus on the half-time substitutions of both Klopp and Koeman that proved so pivotal in the outcome of the match.

Koeman made two inspired substitutions at the interval and was rewarded handsomely as Sadio Mane, one of his new men, scored twice.

While Mane and Victor Wanyama upped Saints’ game, Martin Skrtel, replacing Lovren at the interval, had a nightmare.

Having trailed 2-0 at half-time, Koeman galvanised Southampton to such an extent they pounded Liverpool into submission and gave him ‘the best birthday present I could get’.

After being 2-0 up at the interval and cruising, they collapsed as the Southampton manager Ronald Koeman’s substitutions turned the game on its head.

Klopp’s own introduction at the break of Martin Skrtel in favour of former Saint Dejan Lovren, who had been booked, was less successful, as Graziano Pelle dominated the Slovakian defender in the air and on the ground throughout the second half.

Some reporters questioned Klopp’s decision to introduce Skrtel instead of Kolo Toure, who has performed so impressively when played this season:

Paul Doyle of the Guardian wrote:

While the Dutchman introduced Wanyama and Mané, Klopp replaced Lovren with Martin Skrtel because he feared that Lovren, barracked by the home fans, was inadvertently liable to give the hosts a route back into the game, especially as, in the German’s words, “it looked like the referee was not completely free any more of the emotion in the stadium”.

But Southampton were encouraged, nonetheless, and Liverpool’s defence remained rickety, Skrtel’s woes raising the question as to why Kolo Touré was not deployed in his stead.

It was a tale of two substitutions. Mane improved the hosts drastically after being introduced for the second half, while Klopp was left to regret his change.

Taking him [Lovren] off was understandable but less so was the decision to bring on Martin Skrtel ahead of Kolo Toure.

The manager’s opting for Skrtel over Kolo Toure was baffling though as the Ivorian has put in solid shifts for Liverpool, while the 31-year-old is rusty after a long absence and has a reputation of being too rash.

There was a number of varying points made about the Reds’ performance itself, and the implications of defeat on the remainder of the league campaign. This was the kind of spineless capitulation Kopites thought they had seen the back of.

After all the encouraging progress of recent months Liverpool took an alarming backwards step at St Mary’s.

Momentum wasn’t just dented, it was destroyed as Jurgen Klopp‘s side carelessly grabbed defeat from the jaws of victory.

In total control after first-half strikes from Philippe Coutinho and Daniel Sturridge, their collapse left the German bewildered.

This was the first time Liverpool had blown a two-goal half-time lead in the league since 1964 and they had no-one to blame but themselves.

Reddy felt the game served up a brutal reminder of Liverpool’s shortcomings:

But the second half served as a reminder of the club’s flaws as they were slow to react, exceedingly sloppy and were too submissive. Southampton were up for a fight after the interval and the visitors were not.

The Guardian’s Doyle said the display was evidence the Reds defence needs strengthening this summer:

That defence never looked comfortable and will need to be strengthened if this team are to achieve sustainable progress.

The Echo’s Ian Doyle also pulled no punches in declaring hopes of finishing fourth are, over:

With 27 points still on offer, Klopp refuses to throw in the towel on Liverpool’s top-four hopes.

But the truth is the Reds now face a battle to simply earn Europa League qualification through their Premier League placing.

On an afternoon of a number of poor individual showings, much of the attention predictably was on those of Martin Skrtel and Dejan Lovren.

Doyle for the Echo centred on Skrtel and questioned how long he has left at Anfield:

Keen to make an impact, he didn’t waste any time by conceding a penalty within minutes. And while he escaped as Simon Mignolet brilliantly saved from Saido Mane, he was later partly culpable for all three Southampton goals.

The clock could now be ticking on Skrtel’s eight-year Anfield career.

Dejan Lovren’s improved performances had been one of the features of Liverpool’s strong form going into this match but on his return to the club where he began his Premier League career, the Croatian fell back into the haplessness of his early Liverpool days.

In his player ratings for ESPN, David Usher centred on Skrtel’s shambolic showing:

Klopp usually gets his substitutions right, but he got this one badly wrong. Liverpool’s defence looked all at sea after Skrtel came on. He conceded a penalty, looked edgy throughout and was caught out badly for the winning goal. Poor Kolo Toure must be wondering exactly what he’s done to have suddenly fallen behind Skrtel in the pecking order.

Meanwhile, Pearce instead bemoaned the sluggish cameo of Benteke:

But whatever Benteke was asked to do clearly went straight in one ear and out the other.

His movement was sluggish and he missed a glorious opportunity to restore the Reds’ two-goal lead.