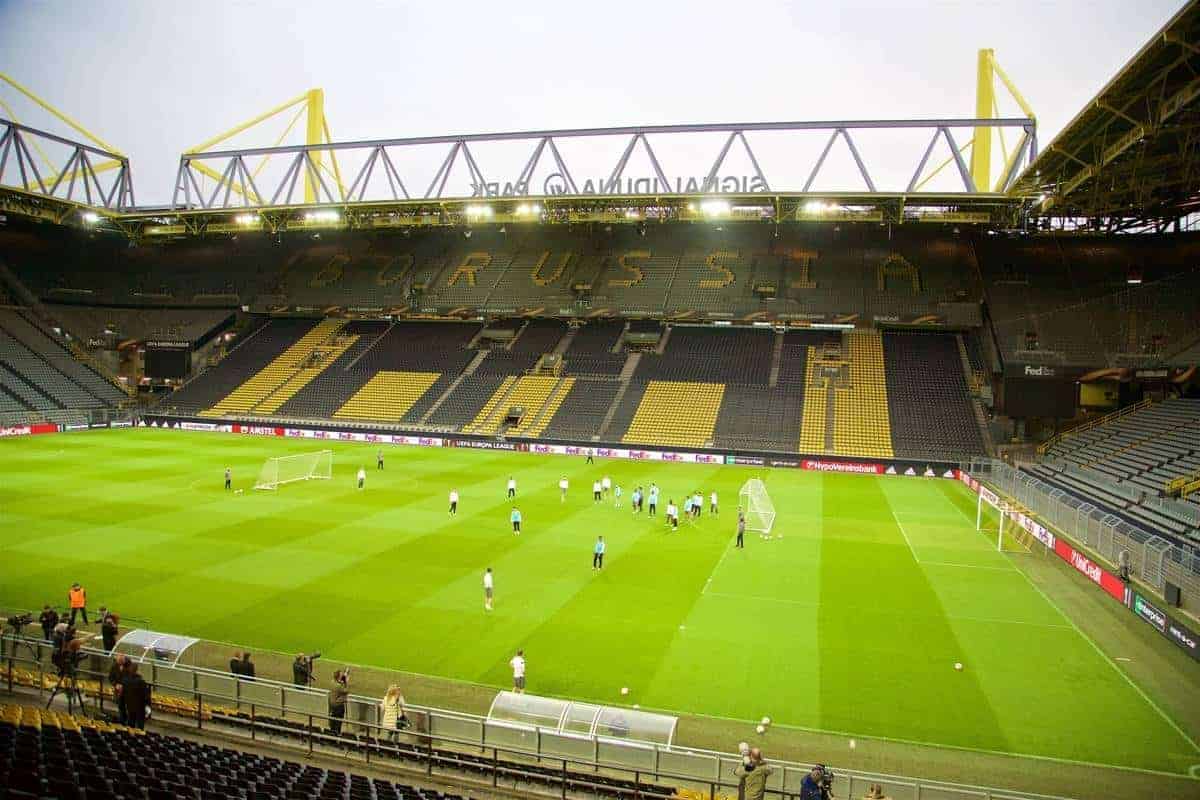 Liverpool make the daunting trip to Borussia Dortmund on Thursday, for the first leg of their Europa League quarter-final showdown. In what is surely Liverpool’s most eagerly-anticipated match of the season, Jurgen Klopp returns to his former club for a huge European clash.

Ever since the draw was made last month, there has been non-stop attention paid to the two-legged affair, and it promises to be a wonderful occasion.

The Reds overcame rivals Man United in the last round, following a 3-1 triumph on aggregate, while Dortmund brushed aside a talented Tottenham team with a 5-1 win over two legs.

Thomas Tuchel’s side are undoubtedly the favourites to reach the semi-finals, but Liverpool have shown over the years that they can be a match for anyone in Europe on their day.

They must stay in the tie during Thursday’s first-leg at Signal Iduna Park, with a cauldron of noise at Anfield awaiting next week.

Klopp’s men warmed up for their trip to Germany with a 1-1 draw at home to Spurs last Saturday, in what was an excellent game of football.

Philippe Coutinho‘s eye-catching second-half goal was cancelled out by a Harry Kane strike, and a point apiece was a fair outcome in the end.

Liverpool have been in good form of late, and the 3-2 loss at Southampton on March 20 is their only defeat since losing on penalties to Man City in February’s League Cup final.

While a certain amount of inconsistency still hampers the Reds at times, they are slowly but surely getting their act together, and producing some very impressive performances.

Dortmund continue to not let Bayern Munich get away from them in the Bundesliga title race, with BVB only five points adrift at the top.

They have won seven of their last eight games in the league, and their last defeat in all competitions came against FC Koln in December.

That outlines just what a fearsome proposition Dortmund are for Liverpool in these two upcoming matches.

They are good enough to reach the latter stages of the Champions League, let alone Europa League, with the likes of Pierre-Emerick Aubameyang, Marco Reus, Henrikh Mkhitaryan and Ilkay Gundogan all world-class players.

Liverpool and Dortmund may have taken part in a pre-season friendly at Anfield in August 2014 – Brendan Rodgers’ Reds cruised to a 4-0 win – but they have not met in a match of note for nearly 15 years.

The two teams were drawn in the same Champions League group back in 2001/02, and it was Gerard Houllier’s Liverpool side who enjoyed the better of things.

A drab 0-0 draw in Germany was a better result for Liverpool than their opponents, and they won 2-0 in the return fixture at Anfield.

Vladimir Smicer and Stephen Wright scored the goals that night, and while the Reds progressed to the next round, Dortmund were sent packing.

Prior to that, the only other competitive meeting between Liverpool and Borussia Dortmund was back in 1966, with BVB winning 2-1 in a European Cup Winners’ Cup clash.

It is a surprise that the two haven’t battled more often down the years, but hopefully these two imminent matches will more than make up for it. Klopp’s main injury concern ahead of Thursday’s first leg is Roberto Firmino, who has not played since the 1-1 draw at Old Trafford in mid-March.

The Brazilian has travelled with the Liverpool squad to Germany, but a late call will be made on whether he has recovered from a hamstring problem or not.

Other than that, the Reds are pretty much at full strength, barring obvious absentees such as Joe Gomez and Danny Ings. Lucas Leiva is also likely to miss out, despite being close to full fitness following a thigh injury.

There are five Reds players on the brink of suspension in Europe, with Firmino, Coutinho, Dejan Lovren, Nathaniel Clyne and Alberto Moreno all a yellow card away from missing the second leg at Anfield.

Dortmund, meanwhile, have been handed a triple injury boost, with Sokratis, Gundogan and Mats Hummels all returning to training on Tuesday.

Gundogan makes things tick in the middle of the park, and having at one stage looked likely to miss out, his return is a blow to Liverpool.

Centre-back Neven Subotic is out for the rest of the season, but he is the only high-profile player to be missing currently.

Klopp and Tuchel cannot have too many complaints in the injury department right now.

It should come as no surprise that Dortmund are the clear favourites to win on Thursday, with home advantage certainly playing a part.

The German giants are 13/25 to take a lead into the second leg, while Liverpool are 23/4 to register a memorable win at Signal Iduna Park. The draw is 33/10.

Aubameyang, one of the world’s top strikers on current form, is 7/2 to score first on the night, while the dangerous Reus is 19/4.

Daniel Sturridge is the Reds’ most likely player to net first at 17/2, and last weekend’s goalscorer Coutinho is 14/1.

The match is live on BT Sport Europe from 7pm (GMT) with kick-off at 8:05pm. Can Klopp and his men produce one of the club’s finest European triumphs of recent times?