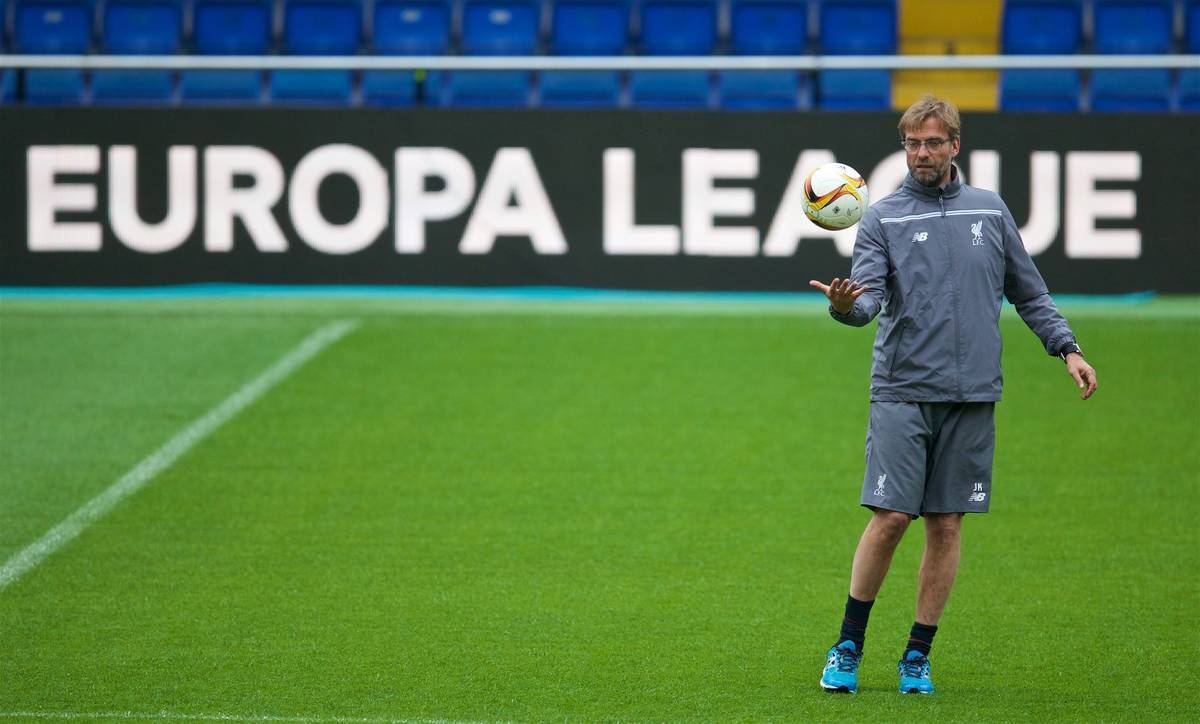 Arguably the biggest match of the Reds’ season awaits, with Spanish outfit Villarreal standing between Jurgen Klopp‘s men and a place in the final next month.

Liverpool have already overcome Man United and Borussia Dortmund in order to reach the last-four and are favourites to progress. The Reds remain unbeaten in this season’s competition – the longest in Europa League history, after 12 games.

Saturday’s 2-2 draw with Newcastle in the Premier League was a disappointing result, but in the grand scheme of things, it shouldn’t have a major bearing on Thursday’s match.

Certain key players were rested, and if Klopp was being totally honest, there wasn’t quite the same intensity as there has been of late.

It promises to be a nervy night in eastern Spain, in what is the first ever competitive meeting between the two teams.

Liverpool have been on an impressive run of form in the last few months, even if there has the been odd poor result thrown in, such as Saturday’s showing against Newcastle.

The Reds have not lost since Southampton overturned a 2-0 deficit at St Mary’s back on 20th March, with four wins and three draws since then.

Two of those draws were tricky-looking games away to United and Dortmund, which were both excellent results in Europe.

The goals have been flowing of late, with 16 scored in their last five outings, and the form of Daniel Sturridge has been especially pleasing.

The 26-year-old has scored in four of his last five appearances, and despite terrible injury problems, he looks likely to end the season as Liverpool’s top goalscorer.

Villarreal’s form has been a little patchy of late, although they are still firm favourites to finish fourth in La Liga, therefore qualifying for next season’s Champions League in the process.

Marcelino’s side could only draw 0-0 at home to Real Sociedad on Sunday, and prior to that, they lost 3-0 and 2-1 at Real Madrid and Rayo Vallecano, respectively.

They did, however, romp to a comprehensive 6-3 aggregate triumph over Sparta Prague in the Europa League quarter-finals, with star striker Cedric Bakambu once again in sparkling form.

Villarreal have taken points off Barcelona, Atletico Madrid and Real Madrid this season, which outlines the quality they possess.

Bakambu is very much a man Liverpool will have to keep a close eye on, with the Congo international scoring nine times in 11 appearances in this season’s Europa League.

Only Athletic Bilbao striker Aritz Aduriz has scored more in the competition in 2015/16, and Bakambu is a player absolutely brimming with confidence.

His strike partner is Roberto Soldado, and while the Spaniard is remembered by some as a player who flopped hugely at Tottenham, he remains a player of real pedigree.

The 30-year-old may have only scored eight times this season, but his unselfishness, movement and link-up play have proved to be the perfect foil for Bakambu.

Captain Bruno is another key player, while fellow midfielders Manu Trigueros and Denis Suarez also have the ability to hurt Liverpool on their day.

It is as a team that Marcelino’s men really thrive, however, with a Leicester City-esque work-rate making them a very difficult side to overcome. The biggest news ahead of the game is, of course, the fact that Mamadou Sakho has been suspended by Liverpool for failing a drugs test.

It is a huge loss to the Reds, and a potentially career-damaging moment for Sakho, with the Frenchman performing superbly in recent months. He has not travelled to Spain with the squad.

With the centre-back definitely out, it is likely that Kolo Toure will come in alongside Dejan Lovren. Lucas Leiva and Martin Skrtel are also options to come into the side, though.

Emre Can and Jordan Henderson remain sidelined, which leaves a huge void in the midfield, while Divock Origi‘s ankle injury means Sturridge has a good chance of starting in attack.

Christian Benteke is part of the squad, having recovered from a knee injury that has kept him out since the middle of March.

Villarreal do not have too many injury concerns to worry about whatsoever, with the majority of their key players very much fit and available.

Centre-back Mateo Musacchio and left-back Jaume Costa are both definitely missing, but they are the only absentees of note.

“It is the best news that Christian is back. He has not had too many sessions but we watched him in training – although now is not the moment to think if he is in the best shape,” he added.

“After injury that is not too easy, but he is in really good shape that is for sure.

“For us it is perfect that he is back and we have only players here in Villarreal who are only ready for being part tomorrow, there are no tourists. If we need him, we can use him. That’s good.”

Marcelino heaped praise on the Reds ahead of the game:

Liverpool are a very good team with extraordinary players that play to a high intensity.

They possess a great counter-attack and pressure a lot too. They’re not going to give us any room to play.

We have to search for ways to get past their first line of pressure. It will definitely be a great game. In general we have a similar style of play to them.

It’s a special match in which those of us with experience must make our presence felt on the pitch. I haven’t won either of the two Europa League Semi-finals that I’ve played in and so I want to make it third time lucky.

Villarreal are the narrow favourites to win on the night, although that is to be expected, considering they are at home.

The hosts have enhanced odds of 8/1 to take a lead with 888Sport into next Thursday’s second-leg at Anfield, while Liverpool’s enhanced odds are 9/1 to pick up an invaluable victory on their travels. The draw is 11/5, which is worth having a punt on.

Backing both teams to score at 26/25 also doesn’t sound like a bad bet, with Sakho’s suspension making the Reds significantly weaker at the back.

The Reds have real firepower in attack with Sturridge, Roberto Firmino, Philippe Coutinho and Adam Lallana, which should cause Villarreal problems all evening.

The Yellow Submarine are the 18/25 favourites to open the scoring at El Madrigal – some early pressure on the Liverpool goal is to be expected – while an opener for the Reds is 19/20.