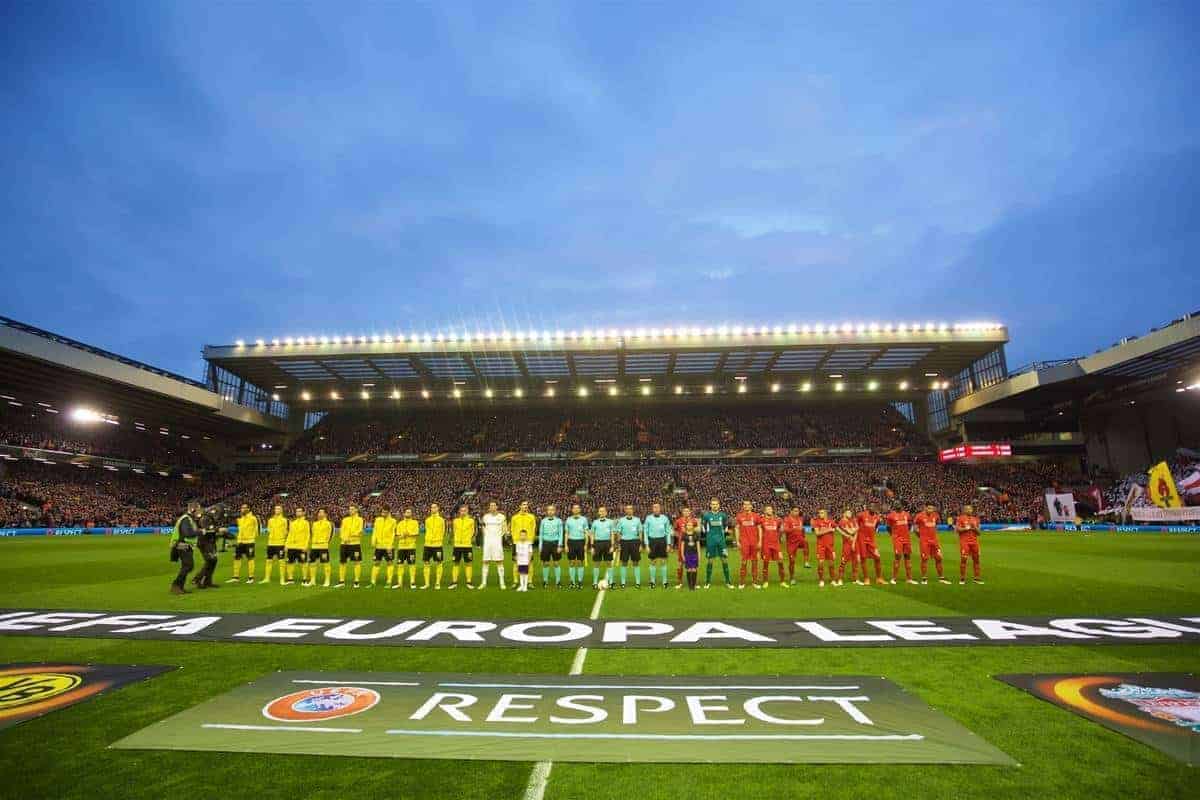 With the quartet of European ties very much up in the air, following tight first-legs a week ago, we were treated to feast of football on Thursday.

There was drama left, right and centre, and in a season when the Europa League has really come of age, this was another great night for the competition.

Here is a round-up of the quarter-final second-leg action.

In arguably the most dramatic night in Anfield history, Liverpool dumped a fantastic Borussia Dortmund out of the Europa League.

Inter Milan, Saint-Etienne, Olympiakos and Chelsea were all absolutely incredible occasions, but this really could top the pile.

Dortmund raced into a seemingly unassailable 2-0 lead after just 10 minutes, thanks to goals from Henrikh Mkhitaryan and Pierre-Emerick Aubameyang, and the Reds needed three goals to go through.

In a remarkable final quarter of the game, however, Liverpool produced a comeback of epic proportions, booking their place in the semi-finals in the process.

Philippe Coutinho and Mamadou Sakho scored to set up a frantic finale, and Dejan Lovren etched his name into Anfield folklore with a last-gasp header in front of the Kop.

It was an evening that will never be forgotten on Merseyside.

Sevilla through by the skin of their teeth

Having won 2-1 at La Liga rivals Athletic Bilbao in the first-leg, Sevilla looked very much on course to go through, in their search for a hat-trick of Europa League crowns.

It proved to be a far harder night than many imagined, however, although Unai Emery’s men still snuck through in the end.

Aritz Aduriz, enjoying a wonderful season for Bilbao, opened the scoring in the 57th minute, which suddenly gave the tie a very different look.

Sevilla were soon level, though, as striker Kevin Gameiro finished off a flowing counter-attack to put the hosts back in control.

Penalties were called for, after a goalless extra 30 minutes, and it was Sevilla who prevailed. Gameiro fired home the winning spot-kick, and Sevilla’s love affair with the Europa League continues.

Villarreal outline their credentials in Prague

With much focus on the all-Spanish showdown between Sevilla and Bilbao, Villarreal went a little under the radar in the quarter-finals.

After winning 2-1 at home to Sparta Prague, they produced an away performance that showed exactly why they should be feared.

Cedric Bakambu, who has been in scintillating form throughout the knockout stages, scored a crucial away goal early on, and the La Liga team cruised it from that point on.

Efforts from Samu Castillejo and Bruno ended the tie as a contest before half-time, as Villarreal started to run riot.

Bakambu scored his second of the night after the interval, and although Borek Dockal and Ladislav Krejcl both found the net for the hosts, they were nothing but consolation goals.

Villarreal are the third favourites to win the Europa League, behind Liverpool and Sevilla, but they are a match for anyone on their day.

Easy progression to the last-four for Shakhtar In comfortably the most one-sided of the four quarter-finals, a dangerous Shakhtar Donetsk outfit breezed into the next round at the expense of Sporting Braga.

There was a feeling that Braga’s late goal in Portugal last week had given them a certain amount of hope, despite losing 2-1 on the night, but it proved meaningless in the grand scheme of things.

Darijo Srna opened the scoring from the penalty spot midway through the second-half, after goalkeeper Matheus fouled Viktor Kovalenko, and it was all very simple from then on.

Ricardo Ferreira scored an own goal to double Shakhtar’s lead shortly before half-time, and Kovalenko then struck five minutes into the second-half.

Ferreira’s miserable night was complete when he scored his second own goal of the evening with 16 minutes left, and Shakhtar can now look forward to a semi-final date against Liverpool, Sevilla or Villarreal.

The draw for the semi-finals takes place at 11.30am BST on Friday.