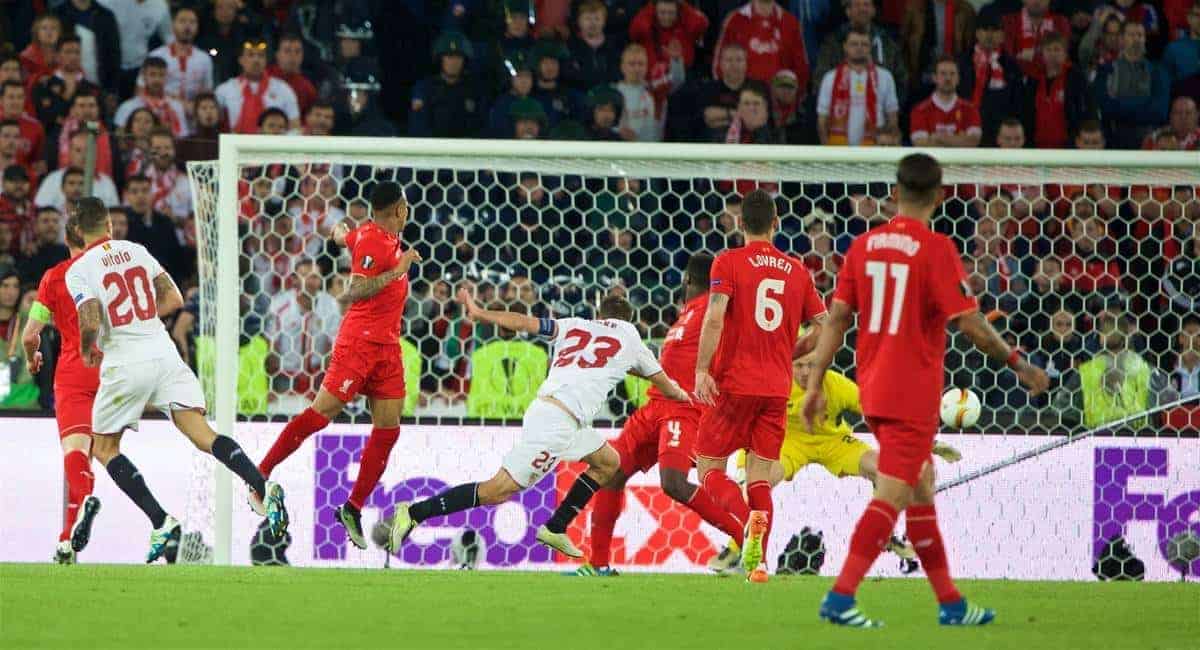 Liverpool lost 3-1 to Sevilla in the Europa League final on Wednesday, as the Reds fell apart after leading 1-0 at half-time.

Liverpool’s biggest match of the season was upon us, with nerves shredded and hopes high in the hours leading up to the game.

As expected, Jurgen Klopp named the starting lineup many expected, with 11 changes made to the team that drew 1-1 at West Brom on Sunday.

Simon Mignolet replaced Adam Bogdan in goal, and the back four was made up of Nathaniel Clyne, Dejan Lovren, Kolo Toure and Alberto Moreno.

Both Jordan Henderson and Divock Origi were named among the substitutes, having recovered from potentially season-ending injuries, as well as Danny Ward, Martin Skrtel, Lucas Leiva, Joe Allen and Christian Benteke.

Victory for the Reds would seal a stunning first season in charge at Anfield for Klopp. Liverpool made a nervy opening to the game, which was to be expected given the magnitude of the occasion. Sevilla looked like a team who had won the last two Europa League titles.

Can had the first shot of the game in the seventh minute, with the 22-year-old German testing David Soria from all of 30 yards. The Reds were growing into the match.

Daniel Carrico did well to clear a dangerous Sturridge header, with Firmino lurking at the back post, and the former Reading centre-back was then fortunate not to concede a penalty after a handball.

It had the potential to be a key moment in the game.

The game remained very even up until the midway point in the first half, with chances at either end few and far between.

Soria denied Sturridge from a tight angle, following a lovely pass by Lallana, while Toure made a couple of important clearances at the other end.

Lovren was booked for a foul on Kevin Gameiro on the half-hour mark, and the dangerous striker then fired just wide with a superb overhead kick.

Eleven minutes before half-time, Liverpool were ahead. Sturridge produced an outrageous finish with the outside of his foot, sending the travelling supporters wild in the process.

It was a moment of genius from a magnificent footballer.

Lovren had a header correctly ruled out shortly after, with Sturridge interfering in an offside position, and Sevilla were clearly rattled.

Sturridge almost got on the end of Clyne’s cross just before the break, and it was the final moment of note in a fairly breathless opening 45 minutes. Liverpool conceded within 20 seconds of the restart, with Gameiro tapping home after Mariano’s cross. Moreno was very poor for the goal, clearing badly in the first place then allowing the right-back to beat him with ease.

Toure then made a crucial tackle to deny Gameiro, and suddenly the Reds were completely on the rack. The game had turned in an instant.

Mignolet made a big stop to keep out Gameiro with 60 minutes on the clock, and there were again question marks about Moreno, who was having an increasingly poor night.

Liverpool were deservedly losing in the 64th minute, as Coke curled home brilliantly after a slick move. Klopp’s men had completely fallen to pieces in Basel.

Origi replaced Firmino midway through the second half, as Klopp desperately searched for inspiration from the substitutes’ bench. The game was effectively put to bed shortly after, as Coke fired in another for his side. The night was turning into a disaster for Liverpool.

The Reds tried their best to respond, but all the confidence had disappeared from their play and the match drifted towards its conclusion.

The below-par Coutinho shot over, and Sturridge tried his luck from distance, but that was about all Liverpool could muster in the final stages.

As the final whistle went, Klopp and his side were forced to stomach a second final defeat in three months, as 2015/16 ended in miserable fashion.

There are plenty of positives to take out of the campaign, but the defeat was still extremely difficult to take.