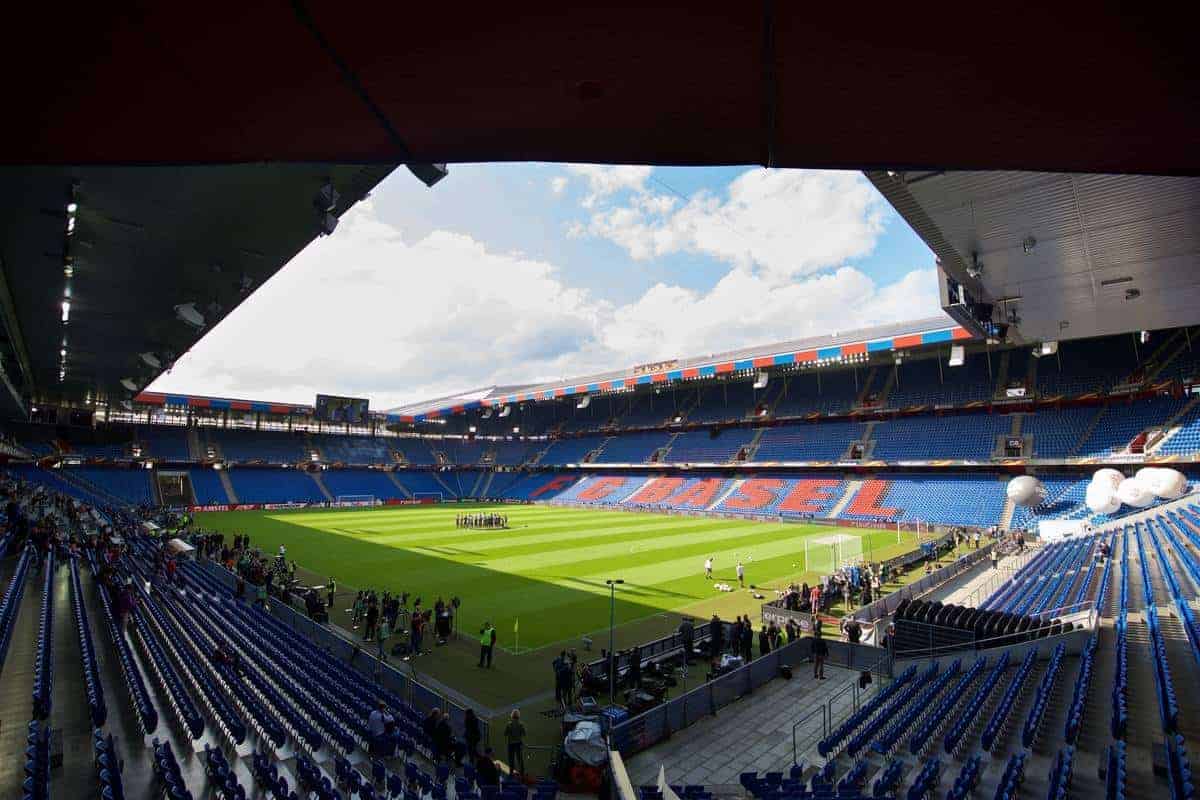 Liverpool take on Sevilla in the Europa League final on Wednesday, in what is arguably the Reds’ biggest game since 2007’s Champions League showpiece.

It has been a season of ups and downs at Anfield, and it culminates in Liverpool’s biggest game of the campaign by far.

Sevilla stand in the way of both a first piece of silverware in four-and-a-bit years, and a place in next season’s Champions League.

The Spanish side are looking for a third straight triumph in the competition, which says all you need to know about their pedigree.

Road To The Final

The start of Liverpool’s Europa League campaign feels a long time ago now, with Brendan Rodgers still manager when it all began.

The Reds topped a group that included Sion, Rubin Kazan and Bordeaux, winning two and drawing four from their six matches.

A 1-0 aggregate win over Augsburg followed in the last 32, with James Milner‘s penalty at Anfield the difference between the two sides.

Liverpool then met bitter rivals Man United for the first time ever in Europe, and their 3-1 triumph over the two legs was richly deserved. Philippe Coutinho‘s sumptuous, goal-of-the-season effort at Old Trafford was particularly memorable.

Many felt Jurgen Klopp‘s side would be knocked out by his former club Borussia Dortmund in the quarter-finals, but again they progressed, this time in truly epic fashion.

A 1-1 draw in Dortmund set up the second leg perfectly, and despite trailing 2-0 and 3-1 on the night, Dejan Lovren‘s last-gasp header completed a 4-3 win – the most incredible victory for many years.

Villarreal were the opponents in the semi-finals, and despite losing 1-0 late on in Spain, Liverpool cruised to a 3-0 win at Anfield, with Daniel Sturridge and Adam Lallana among the scorers.

Sevilla, as touched upon, have been the kings of the Europa League of late, winning it four times in the last 10 years.

They were eliminated from the Champions League at the group stage in December, but their third-placed finish meant they came into Europe’s second-tier tournament.

They cruised past Molde and Basel without conceding a goal to reach the quarters, before overcoming La Liga rivals Athletic Bilbao on penalties.

Shakhtar Donetsk stood between Unia Emery’s side and yet another European final, but they were dispatched of 5-3 on aggregate.

Kevin Gameiro, scorer of 28 goals this season, found the net three times over the two legs. Liverpool finished their Premier League campaign with a 1-1 draw at West Brom on Sunday, with Klopp making 11 changes ahead of the final.

Jordon Ibe levelled up Salomon Rondon’s opener in what was a low-key affair at the Hawthorns, ensuring the Reds finished eighth in the table.

The Merseysiders’ form has been solid for a long time now – they have lost just twice in their last 13 outings – but it has been tough to gauge because of so many weakened teams being selected in the league.

Consistency will be the key for Klopp’s men next season, with results against the lesser teams needing to improve drastically. Sevilla have had a rough time of things in La Liga, with their eventual seventh-placed finish as disappointing as Liverpool’s final league position.

They failed to win in their last nine league matches, and went the entire season without an away victory. It should be stressed that Emery has also often rested key players too, however.

They lost their last three league games, to Bilbao, Granada and Espanyol, but they showed they could perform when it really matters, by beating Donetsk 3-1 in the semi-final second leg at Ramon Sanchez Pizjuan.

Form often goes out of the window once two teams meet in a final, but that feels even more the case with Liverpool and Sevilla. Sevilla have an abundance of talent – it’s impossible not to if you reach a European final – and the Reds will have to be wary about a number of key players.

Gameiro is clearly the star man, given his aforementioned goalscoring feats in 2015/16, with the diminutive French striker an enormous handful on his day.

A player linked with a move to Liverpool in the past, Yevhen Konoplyanka, is a huge threat out wide, with Nathaniel Clyne likely to have a busy evening up against him.

Ever Banega is a fantastic midfielder who has huge experience under his belt, and the Argentina international must not be allowed to run the show by Emre Can and James Milner.

The 27-year-old is very fine all-round footballer, and another that the Reds have occasionally been rumoured to be interested in in recent times.

Grzegorz Krychowiak is an extremely effective central midfielder too, while Adil Rami is an important figure at the heart of the Sevilla defence. Wednesday will be the 12th time Liverpool have taken part in a European final, and they have a good success rate over the years.

They lost their first final, back in 1966, with Dortmund beating the Reds 2-1 in the Cup Winners’ Cup. Roger Hunt got Liverpool’s goal, but to no avail.

The Reds won the UEFA Cup in both 1973 and 1976, with 3-2 and 4-3 aggregate wins over Borussia Monchengladbach and Club Brugge, respectively.

A maiden European Cup arrived in 1977, with Bob Paisley’s side once again beating Monchengladbach, this time 3-1. Terry McDermott, Tommy Smith and Phil Neal got the goals.

A year later, Club Brugge were again seen off, this time in the European Cup final, with Kenny Dalglish‘s goal sealing back-to-back titles at Wembley.

Three years later, an Alan Kennedy goal secured a third European Cup title, against Real Madrid, and a penalty-shootout triumph against Roma in 1984 made it four.

Juventus defeated the Reds in the final 12 months later, and it would be 16 years until Liverpool were back in a European final.

Beat Alaves 5-4 in remarkable fashion under Gerard Houllier in the 2001 UEFA Cup final, Liverpool got back to winning ways, and in 2005, Rafa Benitez’s side produced the most incredible turnaround to beat AC Milan on penalties in the Champions League final.

A 3-0 half-time deficit was erased thanks to goals from Steven Gerrard, Vladimir Smicer and Xabi Alonso, before Jerzy Dudek’s goalkeeping heroics in the penalty shootout completed a truly awe-inspiring win in Istanbul.

Milan got their revenge in Athens in 2007, winning 2-1, but after nine years without a European final, Liverpool are back where they belong on Wednesday night. With Klopp making 11 changes against West Brom, it became abundantly clear what his starting lineup will be on Wednesday evening.

Kolo Toure will partner Lovren at the back, Can and Milner will start in midfield and Philippe Coutinho, Adam Lallana, Roberto Firmino and Daniel Sturridge will make up an exciting attacking unit.

It is the Reds’ best possible lineup, when taking into account injuries and suspension.

Jordan Henderson came off the bench against West Brom, and is likely to make a similar cameo against Sevilla, while the likes of Lucas Leiva and Joe Allen will also hope to feature.

It will be interesting to see who makes it into Klopp’s 18-man squad, with Divock Origi among those hopeful of being included after injury, with the Belgian likely to make the cut.

Emery doesn’t have too many injury problems of his own, with key players very much fit and available, having been rested in the league.

Club captain and former Arsenal man Jose Antonio Reyes could miss out with a stomach problem, while Benoit Tremoulinas is missing with a knee injury.

Marco Andreolli and Michael Krohn-Dehli are out for the foreseeable future, with the latter potentially sidelined until the end of 2016.

Speaking to reporters on Tuesday afternoon, Klopp stressed that his side would do all they could to reward supporters for their backing:

“We already know about the desire of our supporters, we know how much they want to win this cup.

“They showed us in an impressive way when we’ve played away from home, [and] travelling with us around Europe.

“They live all over the world, that shows everything about this club.

“We’d really love to be the team to make these dreams come true.”

“We are champions, we have opportunity to defend title, we will decide if we win or not.

“To win against Liverpool we will need to be perfect.

It is clearly an extremely difficult match to call, and 888Sport’s odds reflect that.

Liverpool are the narrow favourites to lift the trophy at 3/4, but Sevilla are not far behind at all at 23/20. The Klopp factor may be the thing that swings it.

The latter could be a good bet, given Liverpool’s numerous penalty shootouts in finals down the years. Sturridge will lead the line for Liverpool, and it will arguably be the biggest game of the 26-year-old’s career to date. He is 21/5 to score first at St. Jakob-Park.

Coutinho has built a reputation as a big-game player, scoring against both United and Dortmund in the latter stages of the competition, and the Brazilian is a tempting 8/1 to open the scoring.

Gameiro is a man Liverpool should fear, and the fact that the 29-year-old is 7/4 to score anytime shows what a threat he is.

The match is live on BT Sport Europe from 7pm, with kickoff at 7:45pm. There is also commentary on BBC Radio 5 Live.

A potentially famous night in Switzerland awaits us, and you can join This is Anfield for live coverage throughout.