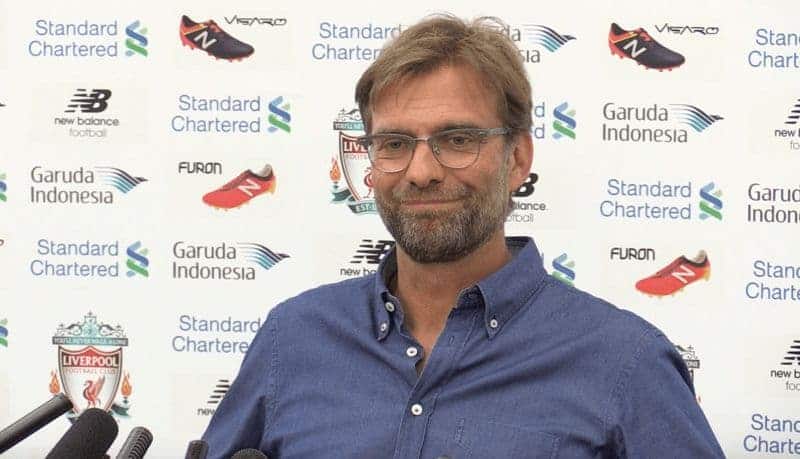 Jurgen Klopp sat down with reporters on Tuesday afternoon, to preview Liverpool’s last Anfield clash of the season against Chelsea.

The Reds welcome Guus Hiddink’s Blues to Merseyside on Wednesday night, looking to continue their strong run of form and complete a positive finish to the 2015/16 campaign.

Still in with a chance of finishing fifth in the Premier League, and looking forward to next week’s Europa League final against Sevilla, Klopp was in a confident mood as he addressed reporters at Melwood.

“What I’d prefer is Thursday next week, we’ve won against Chelsea and West Brom, and we’re back to Liverpool with the cup,” he said.

“I like this all or nothing, but only because of the opportunity to get all.”

Klopp also revealed that Jordan Henderson could return for the clash with Sevilla in Basel, while Daniel Sturridge looks to be in peak condition heading into the European Championship.

As Henderson and Sturridge depart on England duty this summer, however, Klopp’s attention will turn to the 2016/17, and asked about his plans for the next season, he admitted they were taking shape.

However, the German poured a dampener on newspaper speculation over potential signings, saying “you know that 99 percent of things in newspapers are only one percent true.”

“A lot of rumours are really far away from the truth. I know what’s true and what’s not true,” he added.

“Sometimes I don’t [even] know the name of the player who should come to Liverpool!”

For now, however, Klopp’s focus remains on the final three games of the season, a possible fifth-placed finish and securing European glory.