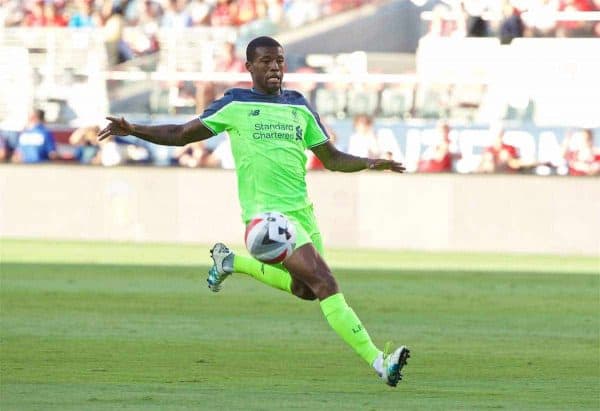 New recruit Georginio Wijnaldum made his Reds bow in Liverpool’s 2-0 win against AC Milan, giving a promising glimpse of the penetrative running and attacking intent he can bring from midfield.

Jurgen Klopp’s side bounced back to winning ways against the Italians to earn their first International Champions Cup win of the summer.

It was a much-improved performance in another productive workout for the sharpening Reds, who deserved victory against Vincenzo Montella’s men, with goals coming from Divock Origi and Roberto Firmino.

Klopp gave the majority of those included on the night a runout as fitness and sharpness is restored ahead of the looming Premier League kickoff.

This saw a Liverpool debut for new £25 million signing Wijnaldum, who showed positive signs of the attacking threat he will bring to Anfield in a promising 45-minute display.

Much debate since Wijnaldum’s arrival has centred on his versatility and where he fits in to the team—with Klopp stating he can play in “five or six” different positions.

Wijnaldum has previously made clear his preference for a No. 10 role, but Klopp has highlighted the 25-year-old’s versatility as a key attribute: “For sure he can play in one of those advanced roles or deeper in a two. He can also play either side in a 4-3-3.”

In sunny Santa Clara, the Reds boss showed his belief over Wijnaldum’s flexibility by deploying him in the last of the roles mentioned, as part of a three-man midfield in an incredibly offensive starting lineup.

With Jordan Henderson—returning for his first start of pre-season—anchoring at the base of midfield, Wijnaldum joined Adam Lallana in a creative centre ahead of the skipper.

Henderson played as the defensive cushion and playmaker on the night, with Lallana operating from a tucked-in right-sided role, from where he regularly drifted wide to link with right-back Trent Alexander-Arnold and right winger Sadio Mane.

This allowed Wijnaldum plenty of space in the middle of the park and left channel to break to support the Reds’ attacking trio of Mane, Philippe Coutinho and Daniel Sturridge.

Though not where he feels he’s at his best, the role brought out some promising moments and aspects of his game—with his midfield running and attacking threat plus points of a solid debut.

Though preferring a more advanced role, Wijnaldum instantly looked settled in the midfield trio—which is as promising as it is important with the season two weeks away.

Constantly buzzing around to make himself available to receive possession, Wijnaldum showed some nice touches and crisp passing as Liverpool quickly found their rhythm.

But it wasn’t long until the Dutchman caught the eye with the breaks from midfield he is known for—which increased his influence and at times provided some promising moments for Liverpool.

The ex-PSV Eindhoven captain clearly enjoys space to drive into—displayed as he consistently sought to take advantage of the advanced areas freed up by Sturridge’s tendency to pull wide.

It was this combination that nearly saw Wijnaldum burst in on goal after just nine minutes—Sturridge drifting to the right where he picked up the ball, cut inside on his left foot and so nearly picked out the midfielder’s late break.

Meanwhile, out of possession—which saw Liverpool sink into a 4-1-4-1 shape—it was promising to see Wijnaldum’s desire to get back into position, before springing out to pressurise Milan’s advances with team-mates following suit.

From this, Wijnaldum created a goalscoring chance, but Sturridge’s attempted finish was blocked after the Dutchman’s quick decision to apply pressure saw him rob the ball and play the striker in with a well-weighted pass.

Alongside crisp and intelligent distribution—which saw him involved in a slick move from which Mane should have scored—Wijnaldum used his athleticism and energy productively on and off the ball.

This will have pleased Klopp as much as the attacking threat he offered from midfield.

Speaking after Wijnaldum’s arrival, Klopp declared: “He can bring a few things into the team that we didn’t have before.”

Some of those are most certainly the attacking intent and goal threat he is known for—something Liverpool have sorely lacked from midfield—which he showed in his first outing.

Wijnaldum’s desire to join in developing attacking play and move into game-impacting positions was plain to see and evident inside the first two minutes—when he broke into the box and nearly met Mane’s cross, which Coutinho couldn’t quite bundle home.

Wijnaldum made the box time and again, and just as impressive was the timing of his runs from deep, arriving late on the scene, which made him hard to track and mark for Milan’s midfield and defence.

Though little fell his way to allow him to show the goalscoring ability that has undoubtedly caught Klopp’s eye since first tracking him as a 16-year-old, his continuous movement and eye for space impressed.

And when not directly moving into the box he showed good anticipation over when to arrive on the edge.

He created another chance for Sturridge—who he linked well with on the night—through this, moving with play and turning down the chance to shoot to instead feed the England striker, whose shot was again blocked.

Whether for himself or supplying others, Wijnaldum showed welcome signs with his midfield running and desire to influence proceedings in the final third.

It was by no means a blistering display and only a friendly, but this offered an exciting glimpse over the extra dimension he could bring to Klopp’s side.