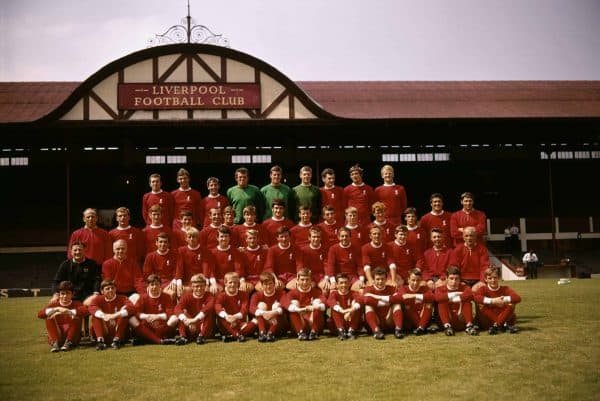 It’s back to the heady days of 1969 for this week’s classic match feature, as Jeff recalls a game at Selhurst Park that even history isn’t entirely sure what happened.

Sitting at the top of the charts, on match day, was a song whose lyrics dreamed of a bizarre future in the year 2525, by a group called Zager and Evans. To be fair, as the 60s prepared to give way to the 70s, things were already starting to look pretty strange.

War was raging in Vietnam, the cold war with the USSR was at its iciest, there were men walking on the moon for the first time and Monty Python were introducing their unique brand of surreal weirdness to British television.

On Merseyside the Echo was reporting that John had married Yoko, Paul had married Linda and the Beatles were splitting up. As if that wasn’t traumatic enough for Reds fans, Liverpool were slugging it out with the blue half of the city at the top of the table.

It was a battle Bill Shankly‘s men would eventually lose. Everton would go on to seal their seventh League title in May 1970, with Liverpool a full 15 points behind in fifth. But we’re getting ahead of ourselves.

Liverpool faced newly promoted Crystal Palace in an evening game, at a packed Selhurst Park on the 27th August. This was Liverpool’s sixth game in 18 days and they would play one more before the month was over.

As starts go, it was a case of so far so good for the Reds. They’d won their opening four games, including league victories over City twice, Chelsea and Tottenham.

They had also played out an Anfield classic against Burnley just four days earlier. Liverpool had gone two goals up, thanks to a Tommy Smith penalty and a Bobby Graham goal just after half-time. Game over you’d think. Not so, what followed was simply incredible. Burnley then raced into a 2-3 lead with a series of blistering attacks that tore the Reds to shreds. This only angered the Kopites packed into the famous old terrace.

Instead of walking out or booing their team, the supporters created a wall of noise that lifted the Reds out of their stupor, shook them hard and threw them back into the game. Wave after wave of Liverpool attacks rocked the Clarets and eventually their defence buckled and Smith smashed home the equaliser in the 77th minute. According to one supporter, who was at the game, Anfield simply exploded. Liverpool had snatched a point from the jaws of certain defeat.

So it was a battle hardened Liverpool team that would made the trip to the capital towards the end of August. They’d already scored 14 goals in five games and conceded just six, but could their war weary legs get going one more time? There was no squad rotation back then and it was common place for clubs to use just 12 players all season, despite congested fixture lists and heavy pitches.

The newspapers at the time were unanimous that Palace gave Liverpool an almighty fright that night in the capital. The scoreline clearly flattered the Reds, with even Shanks saying “I don’t want to have any more tough moments like I had tonight. This Palace team gave us an awkward hard game.”

Palace took the game to Liverpool, who went into the game as joint league leaders. Only Tommy Lawrence in goal prevented the home side from taking the lead. Then somehow, totally against the run of play, Emlyn Hughes netted a 30 yard thunderbolt in the 35th minute and Shankly’s boys would go in at half-time with an unlikely lead.

It would prove short lived though and with the second half barely five minutes old, a mix up at the back would lead to a Palace equaliser. Ron Yeats was a little too casual with a back pass and Lawrence was forced to race from his goal to collect the ball. He found himself out side the box and conceded a free-kick for handball.

Sewell blasted the resultant set piece at the wall and somehow the ball went right through it. Liverpool’s red line parted the ball sailed into the top corner. The crowd of 36,000 erupted. With their tails up Palace would go in search of a winner, but Liverpool had other ideas.

On 72 minutes Callaghan found himself on the right wing. Apparently the floodlights were malfunctioning and the press report the lighting on that side of the pitch was far from ideal. That wasn’t Cally’s problem though and he promptly whipped in a cross that wrong-footed the Palace keeper. Roger Hunt was left with a simple header to put the Reds back in the lead.

It seems the Londoners resistance crumbled at this point and, with time running out, Liverpool added a third. Geoff Strong won a free kick just inside the Palace half. He passed it to winger Peter Thompson who jinked and swerved with the ball seemingly glued to his feet, before unleashing a shot that would bamboozle the Eagles keeper Cliff Jackson.

The press were at odds over this goal though, with one paper describing it as a 45 yard ‘pea roller’ in the 77th minute and others seeming to agree that it was an 82nd minute blast from the edge of the box. It’s hard to imagine such conflicting reports today. Either way it was job done and Liverpool would return from the capital with a vital two points.

Amazingly this was a barren period for Bill Shankly‘s Reds. He had built a team in the 60s that would win two league titles and the club’s first ever FA Cup, but they were fading as the decade came to an end.

He would of course go on to build yet another great team, but Liverpool would go six years, between 1966 and 1972, without winning a trophy. What’s even more remarkable about that period, is that the Kop’s affection for their manager never waned throughout those years.

They were of course amply rewarded for their loyalty to the great man. The legendary Scot would go on to build yet another team of legends, who would win another league championship and the UEFA Cup in 1973 and Liverpool’s second FA Cup in 1974; after a game in which the commentator famously said that the Reds had “stripped Newcastle United bare.”

Shanks was clearly a genius, but perhaps he owes his second coming in the 1970s to a patient fan base, who were willing to give him the time he need to once again work his wonderful magic. It’s true that the man left a legacy of footballing lessons that resonate even today.

However, in fairness to Liverpool’s magnificent supporters, it was the patience of Kopites through those lean years, that represents the most profound lesson of all.