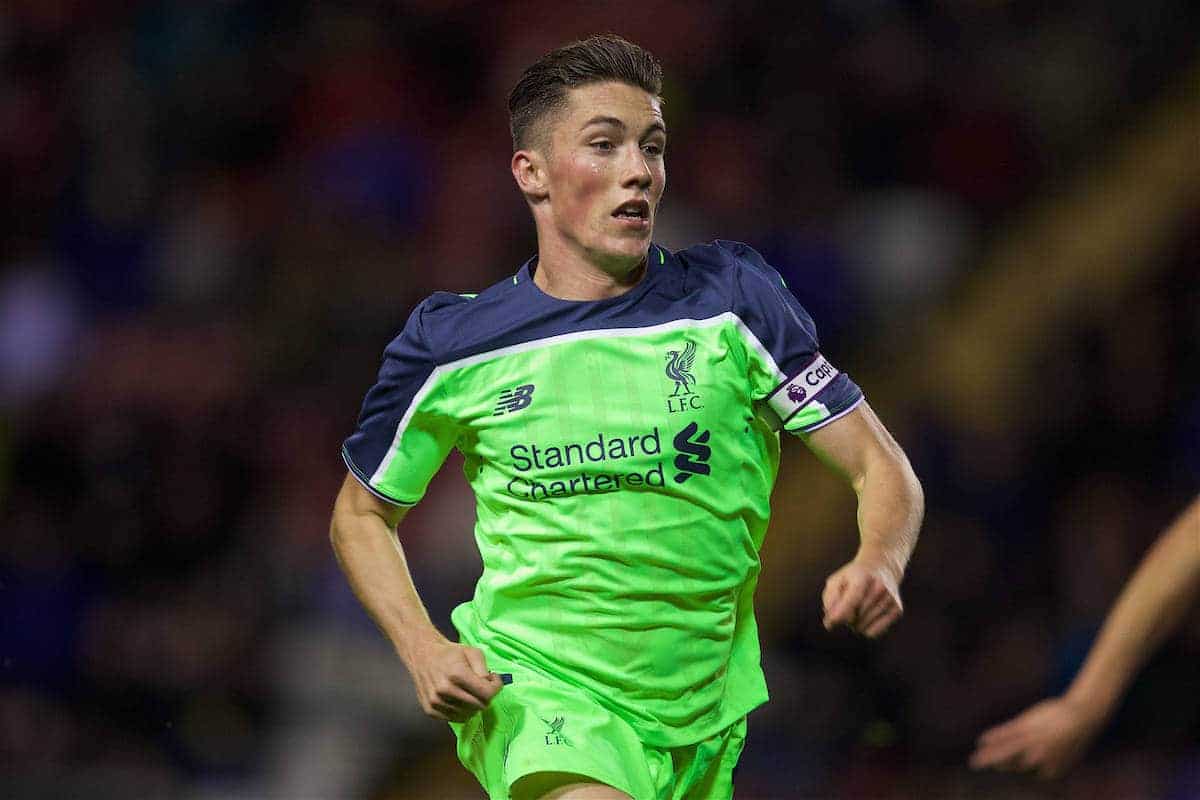 With Liverpool Under-23s captain Harry Wilson in fine form in 2016/17 so far, the winger will hope for a first-team call-up.

Wilson scored the only goal in the young Reds’ 1-1 draw with Manchester United on Tuesday night, continuing his excellent run in Premier League 2 this season.

The 19-year-old has continued an encouraging development since the start of the campaign, and can now be considered one of Michael Beale’s most important players—if not his key man.

But with the line between U23s and first team becoming increasingly blurred following Jurgen Klopp‘s arrival as manager, and the growing role of Pepijn Lijnders as developmental liaison, Wilson will be eager to step up to Melwood on a full-time basis in the near future.

This will be a test of the open-door policy Klopp has taken with Liverpool’s youth ranks—with Wilson’s position under the German still hugely debatable.

Back From the Brink Wilson has long been one of the most talked-about talents in the Liverpool academy, and rightly so, given his potential as a creative force in attack.

Joining the Reds as an eight-year-old back in 2005, Wilson progressed through the ranks, given a taste of under-18s football in 2012/13, before joining Neil Critchley‘s squad full time in 2013/14.

At 16, he had made his first appearance for the Wales national team, with manager Chris Coleman rather questionably handing the inexperienced winger his debut before he had established himself in the Under-21s squad at Liverpool.

He broke Gareth Bale’s record as Wales’ youngest-ever player, by 108 days, and continue his positive trajectory in the coming campaigns.

However, last season, with the Reds undergoing upheaval on and off the pitch, Wilson’s progress stalled through culmination of injury and a lack of game time.

An ill-advised loan switch to Crewe Alexandra, where he made just seven League One appearances due to his commitment to the Wales Under-21s, was ended early as Klopp looked to reduce the amount of temporary moves within his squad.

Returning to Michael Beale’s U21 squad, Wilson suffered a series of debilitating injuries that further curtailed his development, and it was only in July, with the newly reshuffled U23s taking to Germany for a pre-season tour, that he returned to action.

He had missed five months through injury, playing just 1,072 minutes of competitive football in 2015/16, but with time still on his side, Wilson has now worked to restore his standing. “Harry Wilson, it’s a huge year for him. Harry’s going to be captain this year, our longest serving player,” Beale said in August, on his decision to promote Wilson as his leader on the field.

“It was a case of who was going to be the best fit with the staff, who is someone we thought would benefit from having that role. We feel he’s a very, very talented player.”

After watching the likes of Sheyi Ojo, Cameron Brannagan and Sergi Canos make their first-team debuts in 2015/16, Wilson receiving the captain’s armband for the U23s, and signing a new contract, will have been a boost to his confidence.

This has seen the winger respond emphatically, with his 18th-minute strike against United, an impudent clip past goalkeeper Sam Johnstone, the latest in a long line of goals and assists this season. After netting against Rhyl FC and MK Dons in pre-season, Wilson has made a direct goal contribution in each of the U23s’ Premier League 2 games this season but one (three goals, three assists), with Beale’s side unbeaten in their last five.

This included an excellent performance against Leicester City in September, when he scored the Reds’ third and set up Ovie Ejaria for the fourth in a 4-0 victory at Prenton Park.

He also played a pivotal role coming off the bench in the U23s’ 6-1 friendly victory over Kilmarnock in the international break, with the teenager yet to produce a poor performance this season.

As the U23s’ standard bearer, their longest-serving player and their chief playmaker, Wilson is hugely important to Beale’s side—but does this form warrant a first-team opportunity? “When I am managing a club I think each young player should smile, because the door is wide open for him,” Klopp said shortly after his arrival as Liverpool manager.

“He has the chance to do anything. I don’t care so much about experience, it can be important but it is not the main thing.”

In short: if you’re good enough, you’re old enough, with Klopp’s first team the second-youngest in the Premier League, at an average age of just 25.5 years.

By this token, Wilson’s form for the U23s should grant him an opportunity under Klopp.

But, so far this season, the Welshman has remained in training under Beale at Kirkby, rather than joining the likes of Ejaria and Trent Alexander-Arnold at Melwood.

Working against Wilson is the plethora of talent at Klopp’s disposal in attack, with Sadio Mane, Philippe Coutinho and Roberto Firmino firmly established as his first-choice trio, while Ojo, Danny Ings and Divock Origi are among those also awaiting their chance. At 19, and boasting considerable experience at U23 level, Wilson should soon be targeting regular first-team football.

If he is true to his word from one year ago, Klopp should provide him with an opportunity, but it is likely that the quality already in his ranks will stop him from doing so.

But with no European football this season, chances for players such as Wilson are much less this season, with Klopp using strong sides in the League Cup so far and facing Tottenham in the competition next week won’t change that policy.

This leaves Wilson perhaps waiting for a chance depending the opposition in the FA Cup in January. Either that or he could head out on loan to continue his development.

For now, he is showing maturity in his role as U23s captain and progressing nicely.