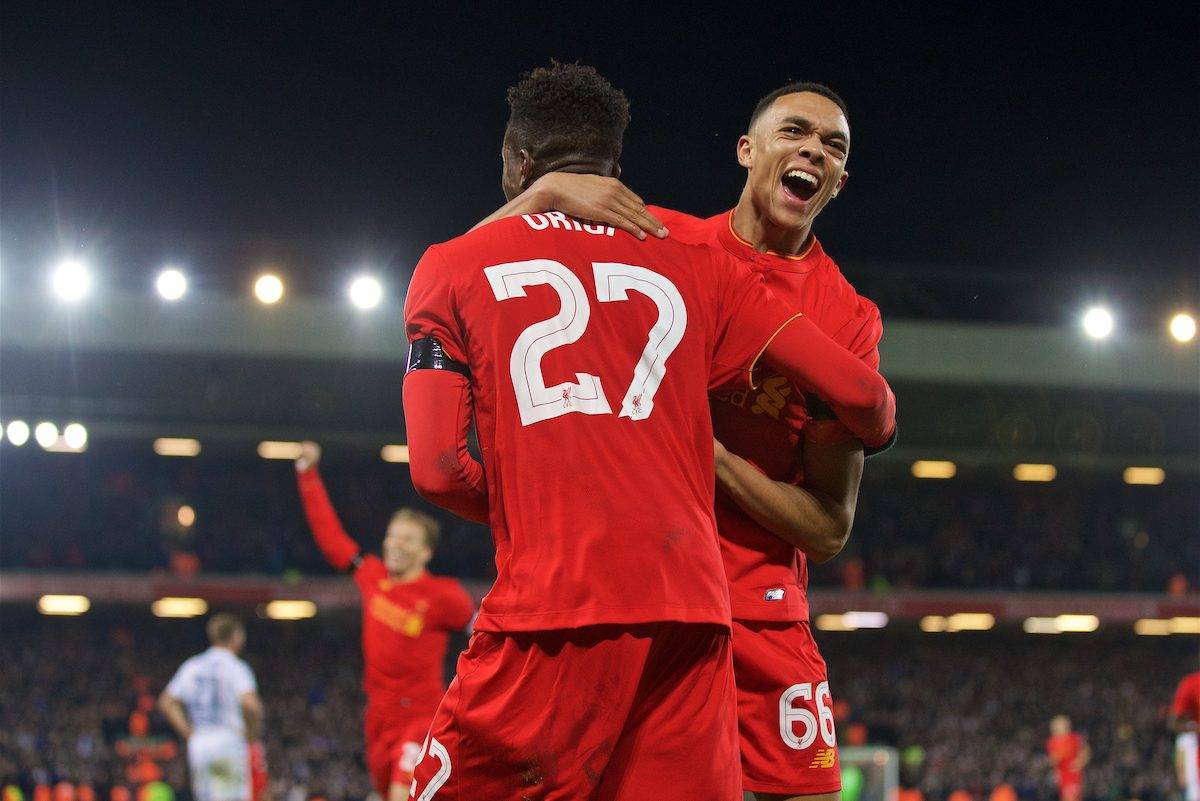 Excellent performances from a clutch of Liverpool youngsters saw the Reds seal a 2-0 League Cup quarter-final win over Leeds United.

Trent Alexander-Arnold laid on Divock Origi‘s opener with less than 15 minutes to play, before Ben Woodburn netted his first goal for Liverpool, becoming the club’s youngest ever goalscorer.

On a night where the Reds struggled in the final third, as Garry Monk’s Leeds held firm throughout, some quality from the academy made the difference.

Here’s how supporters reacted to Liverpool’s 2-0 victory at home to Leeds.

Jurgen Klopp made eight changes, bringing in some promising talent…

Great to see another start for @oejaria – he turned 19 just last week. #LFC

Interesting to see both Can & Gini starting. Leeds are no mugs so being too under-strength could've been an error. Hope Woodburn features.

Always a joy to watch Ejaria, so much technical ability, could be a key player not only for Liverpool but England too if he continues

#Klopp with a strong side. I would have put Mane in bubble wrap.

Nice balanced side for #LFC tonight, vital experience for Alexander-Arnold and Ejaria, and more time for Wijnaldum and Can to gel. Like it.

I'd like to thank Arsenal for not having belief in Ejaria

Ejaria is better than Pogba.
Right now at least.

Not the greatest of halves there. #LFC look like a group of players that have rarely played together. Which they haven't.

Up there with Swansea for poorest half of the season.

Half time thoughts
– some poor touches letting us down
– Ref missing fouls
– Leeds. We're not Utd.Don't sing about Mancs unless we play them

Origi has done well and so has Ejaria. The rest: a collection of meh

Ok 1st half. Neither good nor bad. In control but not enough tempo changing passes or movement. Things have broken down near opposition box.

Leeds hit the post! It was poor from Kevin Stewart, who was caught in possession in front of goal. A let-off for him and #LFC

Things like that happen when you've Kevin Stewart in your team

Time to wake up LFC

Klopp gambled with 25 minutes to play, bringing on Ben Woodburn…

Come on Ben. Great to see the youngster get big minutes in this one #woodburn

Last-minute winner from Ben Woodburn on the way…

Divock Origi broke the deadlock, but it was Trent Alexander-Arnold who took the plaudits…

What a ball by Alexander-Arnold, love to see that, made it simple for Origi #LFC

Even an off-colour Origi could have scored from that cross, fantastic from AA.

The TAA cross was worth about 10 goals.

Super cross from Trent Alexander. Been a tough game but Semi within sight now

What a ball! #TAA

Ben Woodburn is the youngest ever player to score for Liverpool.

Could be the most pleasing goal of the season that. What a moment for Woodburn!

Omg @BenWoodburn ???? what a night for the Academy

Could not be happier about that! Imagine Aacademy coaches @mickbeale and Critch are off their seats wherever they are. Magic moment!

May be past his bed time but Ben Woodburn secures the win! ?

That's what dreams are made of!! #Woodburn #LFC.

Ben Woodburn. Get in there lad. A reminder that football can be ace on a day which needed it. ?

Woodburn's goal just made up for the absolute turgid performance.

Delighted for young Ben Woodburn to get his first goal of many I hope in a Liverpool shirt!

…and full-time saw the Reds through to the League Cup semi-finals!