Liverpool and Man City do battle in a huge New Year’s Eve encounter – we’re here to provide you with the best odds for the game. 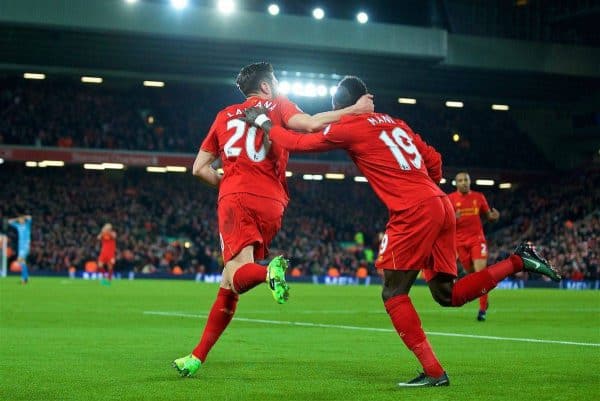 This is a match that could prove so crucial in the 2016/17 Premier League title race, as the second and third-place sides look to stay in touch with leaders Chelsea.

Liverpool and City both won in convincing fashion earlier in the week, with the Reds beating Stoke City 4-1 at Anfield and Pep Guardiola’s side seeing off Hull City 3-0 at the KCOM Stadium.

The two teams are in impressive form, and Saturday’s showdown should see some of the league’s most attack-minded, inventive football on display.

Here are the key odds for a potential Anfield end-of-year thriller.

Games between the top six clubs are always something of a lottery, with moments of magic, individual errors or refereeing decisions so often proving key.

Saturday’s match is no different, and the odds reflect how even it is.

Liverpool are the narrow favourites at 11/8, although that is mainly because they are the home team. Hopefully the famous Anfield atmosphere comes to the fore on the night.

City are 19/10 to go to Merseyside and heap misery on the home support, which given their attacking brilliance, is generous value.

The draw is 13/5 – a result that both teams would not necessarily be unhappy with, but one that would suit Chelsea down to the ground. The Reds haven’t had one outstanding goalscorer this season, but several key men have chipped in with a healthy amount of goals throughout the campaign.

Sadio Mane will be playing his last home game before heading off to the 2017 Africa Cup of Nations, and Liverpool’s top scorer will want to leave Anfield with a bang.

The Senegal international is 13/2 to score first or last in the game, and 19/10 to register anytime.

Adam Lallana is enjoying a magnificent season, and he is 13/5 to find the net at some point during proceedings. Roberto Firmino, meanwhile, is 19/10 in that respect.

Daniel Sturridge got his first league of the campaign against Stoke, and backing the 27-year-old to score last on Saturday (11/2) looks a good bet. He is likely to come off the substitutes’ bench.

Georginio Wijnaldum is due a goal, having only scored once for Liverpool, and Saturday would be the perfect time to get his second for the club. The Dutchman is an inviting 14/1 to either open of round-off the scoring.

Sergio Aguero returns for the hosts after suspension – not ideal timing for Jurgen Klopp – and the world-class striker is 11/10 to score anytime. That is very tempting.

Former Liverpool man Raheem Sterling will want to prove a point, and the Englishman is 9/1 to stun Anfield by scoring the game’s opening goal.

Both sides are full of players who can produce pieces of magic on their own, while their respective defences are capable of coming unstuck at times.

Backing both teams to score (8/15) is highly likely to be a successful bet, but there are definitely better value-for-money ones out there.

Over 2.5 goals in the game (13/20) also stands a great chance of coming in, but that is still being slightly on the cautious side.

This could be a breathless 90 minutes that lives long in the memory.