Get your betting hats on – we are here to bring you the best odds for Liverpool’s FA Cup third round clash with Plymouth Argyle at Anfield on Sunday. 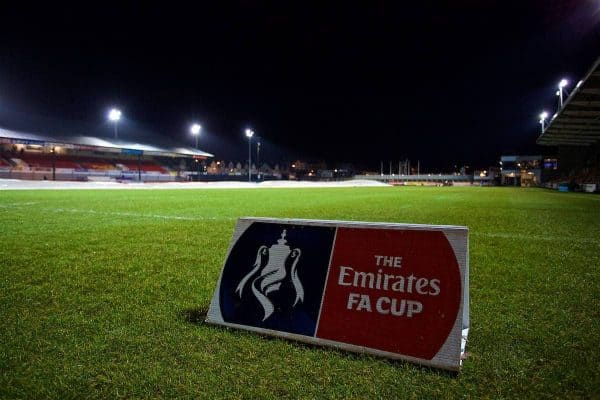 The Reds have not won the FA Cup since beating West Ham in a memorable 2006 final, and there is a feeling that they are due one.

Liverpool have only reached one final in that time, losing 2-1 to Chelsea at Wembley back in 2012. Pretty disappointing, let’s be honest.

Up first for Jurgen Klopp‘s side this season are Plymouth Argyle, currently sitting in second-place in League Two – 68 places below their Liverpool in the Football League.

As usual, there are a vast array of odds ahead of the game – here’s a look at some of the best.

It should come as a surprise to nobody that Liverpool are huge favourites to secure victory at Anfield on Sunday afternoon.

Klopp is likely to make changes, bringing in youngsters such as Trent Alexander-Arnold and Ovie Ejaria, but that has done little to change the bookies’ thought process.

The Reds are 1/6 to win the game, which makes you wonder what they would be with a full-strength team fielded.

Plymouth are a mammoth 16/1 to win at Anfield and produce one of the greatest FA Cup shocks in history, while the draw is 6/1.

Perhaps a couple of quid on a Plymouth win wouldn’t go amiss, if only to cushion the blow of crashing out in humiliating fashion.

Roberto Firmino is expected to be rested, Philippe Coutinho is injured and Sadio Mane is on Africa Cup of Nations duty, so options in attack are sparse for Klopp.

It may well be that the Liverpool manager starts Divock Origi – a frightening thought for Plymouth’s defenders.

The young striker is 8/11 to score anytime, outlining his pedigree, with the Belgian also 3/1 to register either first or last during the march.

Ben Woodburn enjoyed a memorable debut against Leeds United in the League Cup quarter-final, scoring in front of the Kop, and the 17-year-old is 29/20 to find the net anytime. Whether he starts if up for debate, though.

Alexander-Arnold is a player of great potential, and although he is likely to play at right-back, he possesses real quality in the final third.

He is 25/1 to open the scoring and get his first Reds goal, while midfielder Ejaria is a less risky 9/1.

Graham Carey is seen as Plymouth’s most likely source of a goal, with the midfielder 12/1 to score first. Jake Jervis is 14/1, in that respect. The bookies don’t rate the Pilgrims’ chances of scoring at Anfield, if you look at the ‘Both Teams To Score’ market. It is 11/8 for both sides to find the back of the net, but 8/15 if you don’t believe that will happen.

In terms of how many goals there will be in the match, the odds suggest Liverpool have a good chance of thumping their opponents.

Why not be a bit more bold with your selections, though?

If you’re into handicap betting, Liverpool starting with minus five goals and winning the game is 14/1. That may be a little too ambitious, however.