It’s that time again, as we provide you with the best odds ahead of Liverpool’s League Cup semi-final clash with Southampton. 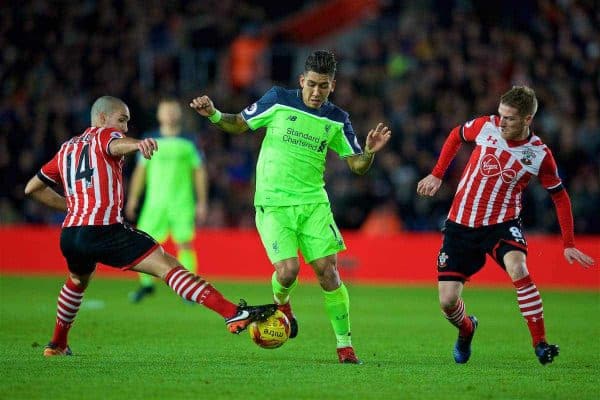 The two sides met in the first-leg at St Mary’s a fortnight ago, with Nathan Redmond’s goal the difference on a night when the hosts dominated.

Liverpool were poor on the south coast, and if they are to have any chance of reaching the final at Wembley next month, huge improvements are needed.

Jurgen Klopp‘s men have really struggled to get going in 2017, and the next week or so sees key matches across three different competitions.

There are the usual odds available ahead of the Anfield showdown – here are some standout bets, provided by 888Sport. Despite Liverpool’s disappointing recent form, the bookies still believe they stand a good chance of victory on Wednesday evening.

The Reds are 13/25 to win inside 90 minutes, although whether that will be enough to have qualified by that point remains to be seen.

Southampton don’t need a victory to reach Wembley next month, but Claude Puel’s side are 11/2 to emphatically make it through to the final by winning on Merseyside.

A draw would also ensure Saints progressed, with 100/30 looking tempting, considering how difficult they can be to beat.

In terms of qualifying, regardless of whether that’s achieved in 90 minutes, extra-time or in a penalty shootout, both teams are usually 9/10, but 888Sport are offering 7/1 on Liverpool to qualify. Click here to get these odds.

That sums up how finely poised this tie is.

Roberto Firmino was Liverpool’s best player by a mile in the 3-2 defeat at home to Swansea City at the weekend, with the Brazilian scoring twice at Anfield in a losing cause.

Firmino looks so much happier in a central role, and he is a man Southampton should really fear on Wednesday. He is 19/10 to score anytime, which looks a really good bet.

Daniel Sturridge is expected to get the nod over Divock Origi in a right-sided role, and the 27-year-old is 19/5 to score first or last in the match.

James Milner is always a shrewd player to back in this market, due to his penalty-taking expertise. The veteran is an inviting 17/5 to register anytime.

Southampton are unlikely to attack Liverpool much on the night, as long as the scoreline stays 0-0, but they are a side capable of hurting anyone on the counter-attack.

Jay Rodriguez has looked good since his return from injury, and the forward is 21/2 to score first and stun an expectant Anfield crowd. That would really spell danger for Klopp and his players.

Shane Long has caused the Reds problems in the past, and the Republic of Ireland international is 18/5 to find the net anytime. He always has a big goal in him. Southampton are one of the most well-drilled outfits in the country, with matches involving them often tight, tactical affairs.

It is hard to see Wednesday’s game being any different, so you don’t want to be going overboard in the ‘total goals’ market.

Backing under 2.5 goals (26/25) looks really good value – don’t forget Liverpool and Southampton battled to a 0-0 draw in the Premier League in November, and just one goal separated them in the first-leg of this tie.

Under 1.5 (29/10) goals is also far from beyond the realms of possibility, with a 1-0 win for the hosts (6/1) taking the game into extra-time. You could certainly see it happening, even though Liverpool’s defensive woes are well-documented.

Another goalless draw (21/2) would be perfect for Saints, and considering the odds, it looks well worth a punt.

This won’t be a classic when it comes to entertainment value, but expect a nervy evening where a special finish or an individual error could make all the difference.