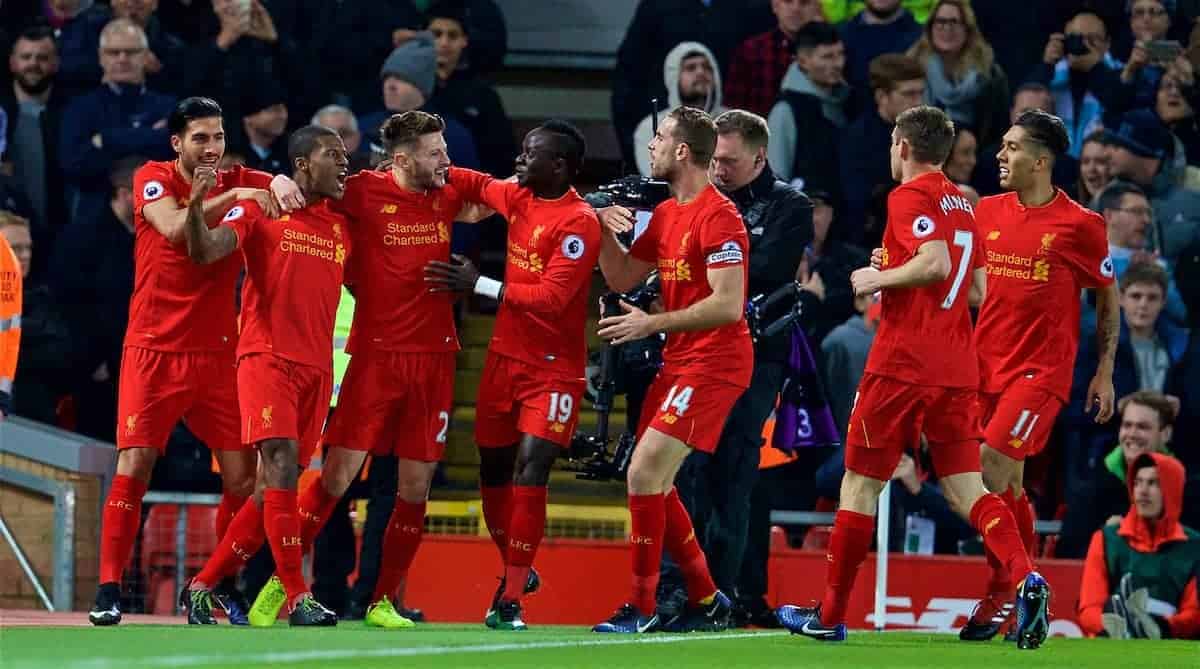 Liverpool take on Sunderland at the Stadium of Light on Monday afternoon, as they look to move to within three points of leaders Chelsea.

The Reds are on an enormous high after their 1-0 win over Man City on New Year’s Eve – a victory that kept them within six points of leaders Chelsea.

Georginio Wijnaldum‘s glorious header proved to be the difference between the two title-chasers, as Liverpool continue their excellent 2016/17 campaign.

With exactly half of their league games played, Jurgen Klopp‘s men are on a record level of points at this stage in the Premier League season – 43 – and attention now turns to Sunderland.

Liverpool have had just one day to prepare for the trip to the Stadium of Light, and legs could potentially be weary.

Klopp needs to manage his squad carefully, although Sunderland find themselves in exactly the same position.

The Black Cats lost 4-1 to Burnley on New Year’s Eve, in arguably their worst performance of the season, and they remain right in the relegation mix.

David Moyes always seems particularly hell-bent on getting one over on the Reds, so they must be switched on and avoid a sloppy result.

This will be a big test of Liverpool’s squad depth and resolve, and it is imperative that they follow up their win over City with three more points.

We spoke to Sunderland supporter Rory Fallow (@RoryFallow), contributor to the Roker Report blog and podcast, to get his thoughts on the Black Cats’ form and Monday’s showdown.

Since we last spoke, Sunderland have won two out of six games and shown a slight sign of a resurgence. Are you confident of avoiding relegation now?

I’m certainly more confident than I was when we last spoke. Swansea and Hull look gone so it’s all about making sure we’re not the team who takes the third spot.

Our awful start has given us a lot to do but we now look like we have a decent game plan and a few individuals are looking reliable. If we can keep up our home form and just improve a little bit away from The Stadium of Light, we have a chance.

There are two things that could really hinder us in the second half of the season though – the injuries are piling up and it doesn’t look like we have any money to spend in January.

At present we have Jordan Pickford, Lee Cattermole, Jan Kirchhoff, Duncan Watmore, Paddy McNair and Lynden Gooch all out long-term, and you can then add four of our players leaving for Africa Cup of Nations, so we’re definitely going to be looking threadbare for a while.

Other clubs will probably have money to strengthen and bring in some reinforcements but Sunderland will have to just plug away with what we’ve got. We need to hope the lads we do have available are up to the task.

Who do you see as the key men in that respect? Is former Liverpool man Fabio Borini one of them, following his return from injury?

Borini is still looking a little off the pace but he’s always a man for the big occasion and he scored a beauty at Old Trafford, so hopefully he’ll be back up to speed soon.

He adds a lot of enthusiasm to the side, works really hard and is a bit of a crafty bugger, so he’s definitely an influential player.

The main man is obviously still Jermain Defoe, and with Victor Anichebe alongside him, he’s starting to get more chances and doesn’t have to spend entire games just playing off the shoulder of the centre-backs.

After those, our biggest attacking threat is coming from Patrick van Aanholt flying up the left flank. PVA is another who is linking up brilliantly with Anichebe and he’s scoring some important goals, while building a lot of our attacks.

Liverpool took just one point from Bournemouth and West Ham after they beat Sunderland, but have won four on the bounce since. Do you still see them as title challengers?

It’s certainly hard to look beyond Chelsea at the minute. They just look so efficient, dangerous going forward and brilliant at the back. There’s still a long way to go, though, and the six points that separate Liverpool and Chelsea could easily be turned around.

Even if you don’t take the title, I think you’ll be the ones that give Chelsea the most cause for concern.

Hit us with your prediction for Monday’s game – how big a factor could Liverpool’s lack of rest be?

The lack of rest will be just as big a factor for us as it will be for you, so I don’t see that having much of an impact. In fact, I imagine you’ll have more options to rotate with so we’ll probably suffer more!

I think it will be quite a similar game to the one we saw at Anfield. David Moyes will be looking to keep things tight, first and foremost, and hoping we get a chance or two on the break. I think you’ll edge it by the odd goal though and win 2-1.

Away fans’ pubs: Head anywhere in the city centre. It’s only a 25-minute walk to the stadium from there and I can’t think of anywhere that doesn’t welcome away fans. My personal favourites are Fitzgeralds, The Dun Cow and The Ship Isis. There’s a few Wetherspoons that are decent as well, such as The Cooper Rose and The Lampton Worm

Captain Jordan Henderson is a doubt for the game, having limped out of the City match in the second-half. Klopp has shown in the past that he won’t risk players who aren’t fully fit.

Key duo Philippe Coutinho and Joel Matip remain on the sidelines, although the return of both is edging closer by the day.

Klopp will have to decide how many of his players need a rest, following their excursions against City, with the likes of Alberto Moreno and Daniel Sturridge pushing for a start.

Sunderland have a shot of injury problems, with the festive period testing their squad to the limit.

Highly-rated young goalkeeper Jordan Pickford is missing, which is a big blow, while former Everton man Victor Anichebe is out with a hamstring issue.

Lamine Kone, Lee Cattermole, Jan Kirchhoff and Duncan Watmore are among the other absentees. Klopp was coy about his team selection ahead of the game, although he hinted at both Sturridge and Divock Origi starting:

“We have played already with Divock and Daniel together, so of course there is an opportunity.

“But actually, even when it’s the Sunderland press conference, I don’t want to give David Moyes any information about our line-up.

“I will say at this moment we will play the exactly same line-up as tonight.”

The match is not live in the UK, due to it being a 3pm kick-off, so be sure to tune in to our matchday live blog from 2:15pm.

We will be providing minute-by-minute updates, with a rich array of tweets, photos, videos and statistics thrown in for good measure.