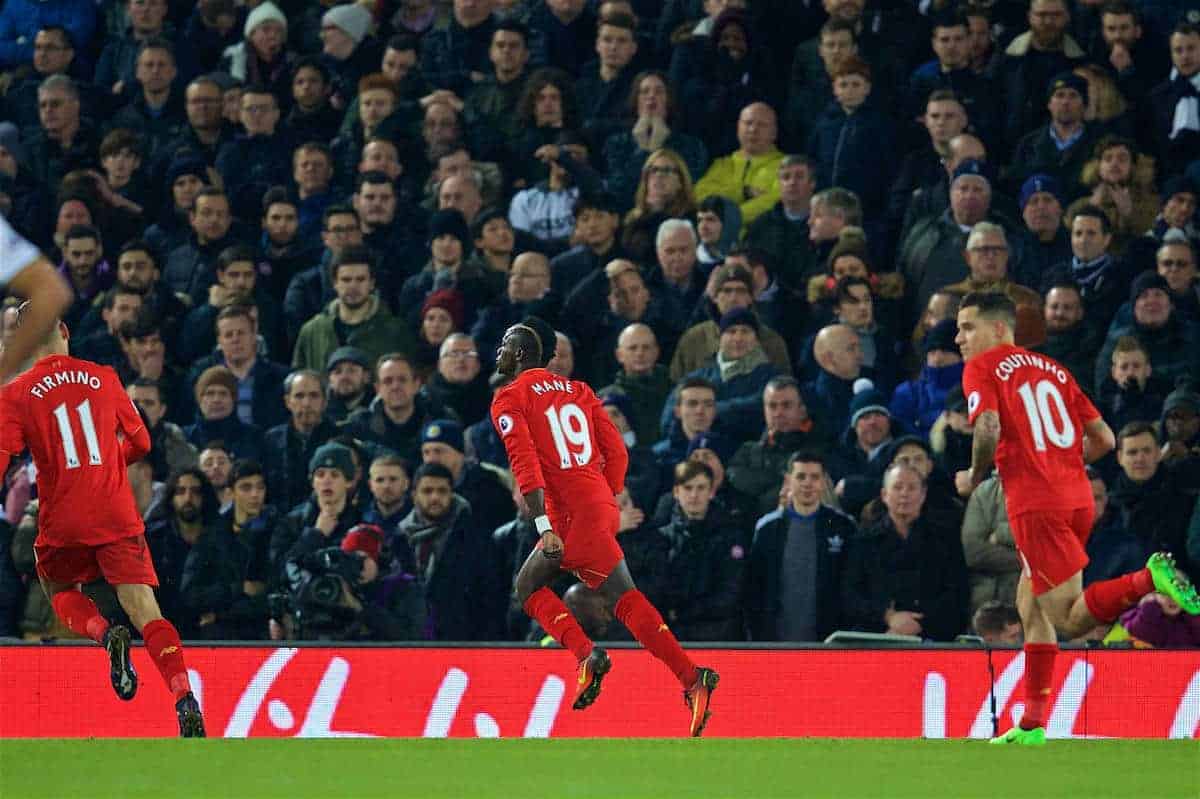 Liverpool produced an excellent display to get back to winning ways when Tottenham Hotspur travelled to Anfield on Saturday evening.

The Reds were searching for their first league victory since New Year’s Eve and they didn’t disappoint as a terrific first-half performance sealed a 2-0 win.

Jurgen Klopp maintained faith in Simon Mignolet despite many fans hoping to see Loris Karius given another chance following a host of mistakes from his Belgian team-mate.

Lucas Leiva also retained his place at centre-back ahead of the injured Dejan Lovren and produced a solid display before leaving the field with a suspected hamstring injury.

Georginio Wijnaldum was given the nod ahead of Emre Can and he produced arguably his best performance since joining in the summer.

He set up Sadio Mane‘s opener and Liverpool then went 2-0 up before the half-time break when the Senegalese winger netted his second goal in as many minutes.

The second half was a little scrappy and a number of yellow cards were dished out but Liverpool had done the damage in the opening 45 minutes and Spurs found no way through.

Here’s how fans reacted to the 2-0 victory on social media throughout the game.

“Wijnaldum is smashing it today!”
– Serge SL on the forums.

That is exactly why Wijnaldum should be in the team week in, week out. What a ball.

“This is the Liverpool we’ve missed. Rampant… excellent… frustrating… completely capable of this.”
– Paul Hemnall on Facebook.

This is the team we all know! This is what Mr Klopp is all about! How he wants them to play ??Love it!

And following a scrappy second half, fans were delighted Liverpool were finally back to winning ways…

loving the physical side of our game today, lots of tackles flying in, not backing down or being bullied it's great to see.

“Just shows what a difference Wijnaldum and Lallana make in that midfield, they create so much space for the front 3. Glad to have you back Mane. Well played Lucas and Mignolet too.”
– Gary Atherton on Facebook.

This is more like it lads my beloved #LFC

“A week on the training pitch makes a huge difference, we look fresh.”
– Sugar Ray on the forums.

If only we were this deadly against the mighty teams from the bottom half of the league.

Well that was certainly Mane against boys.

“One day you go on to a defeat against Hull City and the next one you’re completely crushing one of EPL’s hardest teams. Just some Liverpool things, I guess.”
– Manuel Lopez on Facebook.

Bossed Spurs tonight. Back in business. No mention of FSG for 16 days. Prep & rest then we go again. Up the Reds.

Massive win, superb performance. One point behind Spurs all of a sudden (and Arsenal). That showed what a week between games does.

Wow, what a win that was. Real statement performance from Liverpool, need to follow that up in two weeks' time.