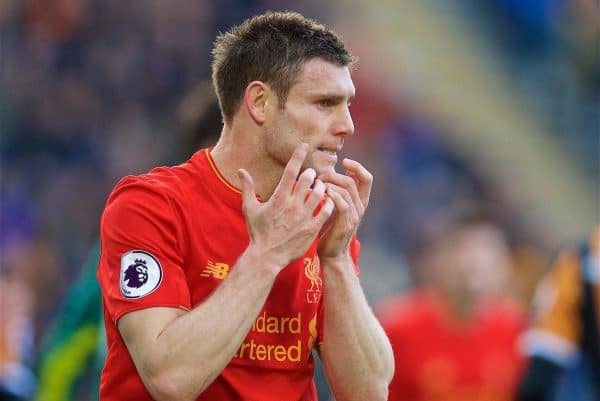 His first-half contributions included a good commanding take from a set-piece, and a good intervention to stop a low cross with Abel Hernandez lurking.

But just before half-time he made an error which led to the first goal being conceded, failing to take the ball in a challenge with Hernandez and instead palming it to Alfred N’Diaye.

The defence should have dealt with the initial ball in from the corner, but when given the chance to diffuse the situation the Belgian ‘keeper merely made it worse.

Dove bravely at the feet of Hernandez late in the second half but was unable to stop Oumar Niasse’s shot for Hull’s second.

Needs to do more in attack despite being reasonably good in the general buildup. One cushioned header to Jordan Henderson from a high ball was nice.

Had a good chance to make something happen when he found himself on the end of a Henderson pass into the area, but he dallied and allowed Hull to regain possession.

Had a free header from a corner in a first half but sent his effort wide. Might have done better with the chance considering there were no opposition players near him, but the cross was slightly behind him.

Other chances fell to his feet at set-pieces in the second half, but he couldn’t work his shot through a crowded area.

Couldn’t recover to catch Niasse as the former Everton man scored Hull’s second on the counter-attack.

Came into the side as Dejan Lovren picked up a knee injury and Ragnar Klavan was sick.

Provides another ball-playing option from the back which can be good against teams which sit back, but only if those ahead can move the ball forward quickly, which they didn’t.

Slightly better at centre-back than he is in midfield, but is still useless if isolated one-on-one in defence when the opposition are counter-attacking, as was the case with Hull’s second.

He was positioned in an area where he could neither prevent the ball over the top, or keep up with the striker.

Was given plenty of space on the left-hand side but couldn’t do anything with it. It was almost as if opposition manager Marco Silva planned it this way as they knew he wasn’t a danger.

Hull then exploited the space behind him and Milner had trouble with Kamil Grosicki. This was also the area of the pitch that produced the corner from which the home side scored their first.

Was the worst outfield player in terms of pass success while he was on the pitch, and was put out of his misery when he was replaced by Alberto Moreno with 10 minutes to go.

Dovetailed with Emre Can and was given more licence to get forward than usual.

Was one of the players in the vicinity when Harry Maguire was allowed to win a header from the corner which led to the goal.

Forced Eldin Jakupovic into a good save late in the game with a well-hit shot from distance.

Wears the armband, but can’t seem to inspire those around him to turn things around as Liverpool’s slump continues.

Saw an early shot go well wide, and struggled to get into the game despite his centre role.

When the opposition defends in numbers the midfield need to be quick and incisive, but Can looked clunky.

He was the player replaced when Klopp looked to change things up, as he was offering very little.

Wasn’t in the game in the first half, but produced a good cross for Sadio Mane in the second.

Had more chances to put balls into dangerous areas, but his delivery got gradually worse as the game went on.

Often found himself in good areas in and around the opposition area, but his passes were hit-and-hope rather than measured, composed balls to team-mates.

His pace won a couple of free-kicks in a dangerous areas, and he was one of few Liverpool players to really test Jakupovic with a header from Lallana’s cross.

Was the brightest spark on a dull afternoon for Liverpool, and even then his performance wasn’t one to write home about.

One drop of the shoulder and a quick dart past a Hull defender gave a glimpse of the magic of old, but these moments were rare.

His afternoon was summed up by a volley which he ballooned into the stands, and then a great chance to equalise which he fired wide with his left foot.

Then to add to his poor performance he passed the ball straight into touch during injury time.

Like the rest of Liverpool’s attacking players he’s struggling to replicate his early season form.

Was hardly involved in the game, although he did have a shot towards the end of the game which deflected wide, and almost set Daniel Sturridge up in injury time, but it was all too late buy this time.

Dribbled into trouble not long after coming on, but was later able to test the Hull ‘keeper with a stinging left-footed effort in the final minutes.

Almost got onto the end of a Firmino ball over the top in injury time, but couldn’t quite get enough on the ball to divert it towards goal.

The manager opted for Can in midfield rather than Georginio Wijnaldum despite the Dutchman’s good performance against Chelsea.

The lineup was more of a 4-2-3-1 than the 4-3-3 often seen, but Can and Henderson worked as a pair with one staying back when the other went forward.

It was another frustrating afternoon for the manager who now has his work cut out to turn things around.

His team have gone from title challengers to the team looking most likely to drop out of the top four in the space of just a month.