Liverpool travel to Hull City on Saturday, and as always, we are here to bring you the best odds available for the Premier League clash. 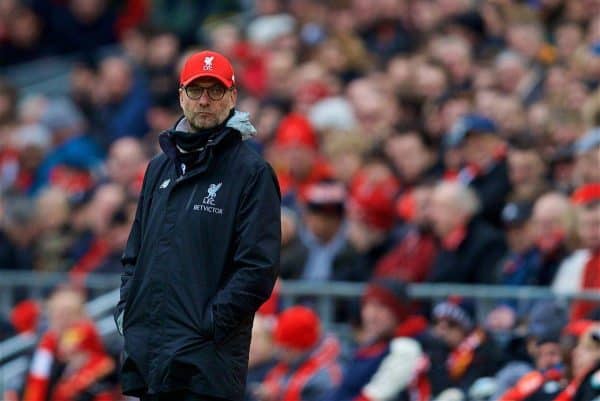 The Reds stopped the rot on Tuesday night, with their 1-1 with Chelsea a major step in the right direction. They might not have won, but the performance was very promising.

January was a horrible month for Jurgen Klopp and his team, but there is a feeling that happier times lie on the horizon, hopefully starting at Hull.

Marco Silva’s men are 19th in the Premier League currently, and although they have shown signs of form, these are the games Liverpool simply have to win.

They haven’t prevailed at the KCOM Stadium since a 3-1 win in April 2009, so they are due one there.

Here are the best odds ahead of the game, provided by 888Sport. Despite winning just once in nine attempts so far this year, across three competitions, Liverpool are still resounding favourites to leave the KCOM Stadium with three points this weekend.

Klopp’s men are a huge 6/1 (normally 7/15) to pick up a much-needed win – one that will ensure their slim title hopes remain alive, and keep them in a strong-looking position in the top-four battle. Click here to get 6/1 (7.0) on a Liverpool victory!

You could be forgiven for not wanting to take a punt on this, in fairness, given how poor the Reds have been against some of the Premier League‘s strugglers in 2016/17.

Hull are 13/2 to stun the visitors and give their survival battle an enormous shot of adrenaline, while the draw is 15/4.

Only a win is good enough for Liverpool – failure to do so would knock all the stuffing out of them once again, as they look to hunt down Chelsea slowly but surely.

Georginio Wijnaldum again proved to be the man for the big occasion against Chelsea, having headed home at the Anfield Road end just like he did against Man City on New Year’s Eve.

The 26-year-old has been a very good signing, but more goals from midfield are important. He is 10/1 to score either first or last in the game, and 18/5 to register anytime, which looks a good bet.

Sadio Mane should be ready to start, which is a huge boost, and the flying forward is 37/25 to score on his first start since January 2. If you think he’ll fail to find the net, the current odds are 49/100.

Roberto Firmino and Philippe Coutinho haven’t quite fired in tandem in recent weeks, but it won’t be long until they click again. The Brazilian duo are 19/4 and 5/1 to score first, respectively.

Abel Hernandez is seen as Hull’s biggest goal threat by the bookies, with the Uruguayan 14/5 to register anytime. At least it will cushion the blow of Liverpool conceding. This is likely to be the first time since November that we see Mane, Coutinho and Firmino all in the Liverpool starting line-up – a glorious thought.

Goals should, therefore, start to flow again for the Reds, so you may want to bet against Saturday being a low-scoring affair.

In the Both Teams To Score market, backing ‘Yes’ (4/5) looks both a wise choice and good value, with Liverpool never exactly convincing defensively.

Putting some money on over 2.5 goals (4/6) also looks worth a punt, even though games involving the Reds haven’t exactly been goal-fests of late.

You may want to focus solely on Liverpool, in which case why not bet on their total goals? Over 2.5 (31/20) is very good value, mainly because Mane is back, while over 3.5 (39/10) could be worth the risk, if you’re in a particularly bold mood.

Finally, here’s our scorecast tip for the game – Coutinho to score first and Liverpool to win 2-1 (21/1). Stick a few pounds on it.