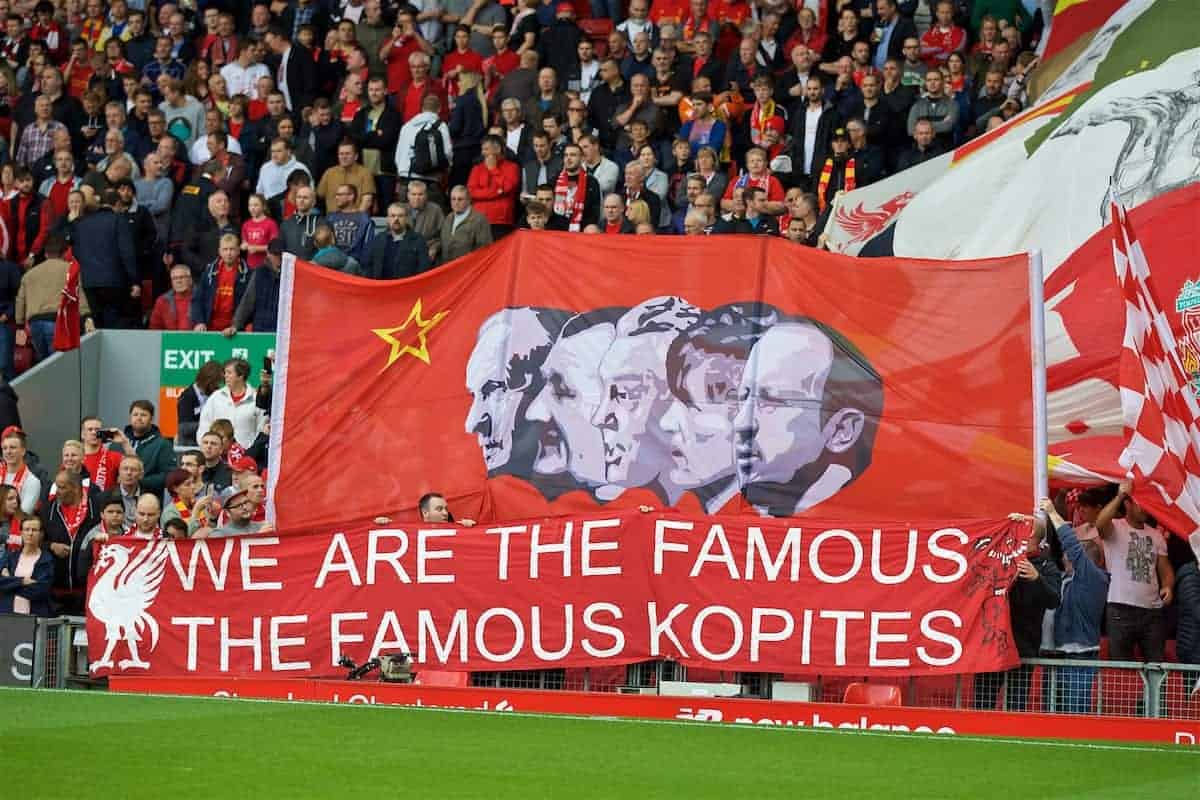 As we continue our matchday Q&A series, we speak to long-serving Liverpool supporter and Kop season-ticker holder, Jeff Goulding.

Jeff is an Anfield regular who has been following the Reds for decades, giving him a welcome insight into how the club, and the matchday experience, have changed over the years.

His other tales of Liverpool’s history can be found in our Classic Match series here.

The 3pm kick-off is a rare an endangered species these days, but matchday rituals are generally the same for every game. The buildup begins from the moment you wake up to the telltale fluttering sensation in your belly. It’s there for every match and the bigger the clash the more intense it feels.

In all the years I’ve been going the game, good times and bad, that has never left me. Whether I’m at work or at home, the feeling is always the same, I’m totally distracted and I can think of nothing else.

The general rule is get to the pub at least a couple of hours before kick-off. Sometimes I’ll arrive a bit earlier than that, if I can get out of the house. I like to do a lap of the ground and just soak up the place, its sights, sounds and smells. I love seeing the old hands buying fanzines and badges and the first-timers in awe and snapping selfies. They always have the same look on their faces. It’s like they’ve just won front row seats to the biggest show in town. They have of course.

Then I head to the pub to meet friends. Superstition has always played a part in our choice of pre-match boozer and once we settle on one we tend to stick to that for the season. We changed mid-season once and…well I don’t like to talk about it. Unless it’s a big game and there’s a call to get in early, we generally stay in the pub until the last possible moment and then walk up Walton Breck Road to the Kop.

Where’s your season ticket located? Have you ever considered moving seats?

My season ticket is in block 109 of the Kop. It’s in the corner under the scoreboard. It’s actually part of the Centenary Stand but its separated from the posh seats by a steel partition and looks down on the Kop seats below. The view of the action is pretty decent and because we’re cut off from all around the area has developed its own distinct atmosphere. Sometimes that’s a good thing, sometimes it’s not.

I have always fancied swapping seats and moving to the singing section at the back of the Kop, but never done anything about it. I guess where I am can’t be all that bad. I have sat there for over a decade now.

How does your matchday differ from say 10 and 20 years ago?

My matchday experience has differed little in 20 years. Yes, the infrastructure around the ground has seen change in that time, but my routine hasn’t. There have been improvements to the concourse on the Kop, television screens etc., but nothing drastic. The stadium speaker system still sounds tinny and sometimes even inaudible.

The changes to my matchday experience started much earlier than 20 years ago, with the seating of the Kop.

Back then I’d aim to be inside the ground much earlier. That led to a buildup of atmosphere before the kick-off. Of course there was a trade off in terms of comfort and facilities back then were especially primitive.

Still it was louder and more comradely place back then—at least that’s how I see it through my red-tinted spectacles. I think most people of my generation do too.

Understand that this isn’t any old football ground. This place has a unique history and more than that its own distinct character and personality. Soak that up and be part of it.

Above all: sing, shout and get behind the lads on the pitch; the time for moaning is in the car on the way home or in the pub, never during the game.

That’s more than one piece of advice, but I stand by it. Find a way to get people in the ground early and encourage friends and groups to sit together. Make football affordable to younger supporters with discounts for groups of supporters purchasing tickets together.

Being at the match with a large group of your mates is the best way to follow your club and it creates a sense of togetherness that can only enhance the atmosphere.

If you cultivate customers, that’s exactly what you get; along with a sense of us and them and the fickle whim of the consumer. Much better to cultivate supporters.