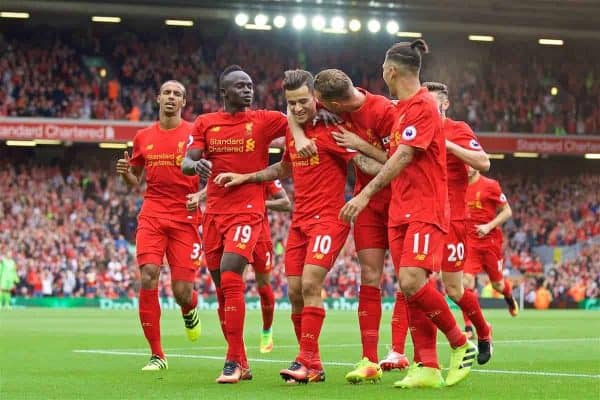 January is over and Liverpool visit Hull City on Saturday afternoon as they look for their first Premier League victory of 2017.

Finally, January is over—we can all take a collective sigh of relief.

It was a treacherous month for Liverpool—the Reds’ only win in nine matches was away to Plymouth Argyle—but it ended on a mini-high.

Although the Reds failed to beat Chelsea and gain crucial ground on them in the title race, the 1-1 draw was acceptable and the performance hugely improved.

There is a feeling that Jurgen Klopp‘s side have overcome their lowest point of the season, and that we will now start to see the best of them again.

The return of Sadio Mane is a huge plus, while the likes of Joel Matip, Jordan Henderson and Philippe Coutinho are starting to reach full fitness again.

Hull will provide a stern test of Liverpool’s credentials, however, with their 0-0 draw at Man United on Wednesday proof of the improvements they are making under Marco Silva.

We all know that the Reds can struggle in matches of this type—see Burnley, Bournemouth, Sunderland and Swansea for proof of that—but we should have enough to seal three points.

The visitors won’t have it all their own way, and it may not be a classic, but Saturday should be the day Liverpool’s season clicks back into gear.

“There are plenty to choose from. Nearer the ground, the Brickmakers and Walton Street Social Club—both opposite the Walton Street car park—welcome away fans,” says Hull season-ticket holder Mike Lees.

“Within 15-20 minutes’ walk is the Avenues on Chanterlands Avenue or there are quite a few bars and pubs on Princes Avenue.”

Mike’s advice for a visiting fan to the KC Stadium:

“There’s plenty to do in Hull. For 2017, we are the ‘UK Capital of Culture’ (I know, a poor man’s European Capital of Culture!), so there is a programme of events running throughout the year. Outside of that, other attractions are The Deep (aquarium), the museum quarter and Hull’s very own ‘fish trail’ (tour of the city on foot, following fish found in the pavement).”

For the first time in what feels like an eternity, Klopp has a fully fit squad to choose from.

Mane is expected to start, having made a late cameo against Chelsea, which gives the entire team a different dimension.

The space that his speed and movement creates for the likes of Coutinho and Roberto Firmino is so important, and the trio should start in the front three for the first time since November.

That means dropping Adam Lallana into his preferred central midfield role, with one of Georginio Wijnaldum or Emre Can making way. Wijnaldum is the stronger player currently.

Daniel Sturridge and Divock Origi will again have to make do with a place on the substitutes’ bench, with their current form not worthy of a starting berth.

Lazar Markovic has joined Hull on loan from Liverpool, so is ineligible, while Curtis Davies and Markus Henriksen are major doubts for the game.

Andrea Ranocchia should feature again, having played at United, with the experienced Inter Milan defender another loan signing until the end of the season.

Klopp said he was hoping to see more goals from Wijnaldum, following the midfielder’s equaliser on Tuesday:

“OK now he’s scored against City and Chelsea, and Watford—that’s long ago obviously. In another game he had a big chance in the box and we said ‘you should improve finishing’.

“He’s a good player, that’s why he’s here. He made two headers, the third one against Watford, and one or two good chances.

“Yes, he needs to be sometimes in and around the interesting situations, when balls come down, where he can be involved.

“Especially [against Chelsea] in the first half he wasn’t in the box one time, which makes no sense from his position.”

The match is not live on UK television—the first Liverpool game not to be shown on TV since the 2-2 draw at Sunderland on January 2.

Never fear, however, because we will be running our matchday live blog from 2.15pm, with kick-off at 3pm.

There will be plenty of content before the match, and minute-by-minute updates during it.