As Liverpool prepare to take on Man City at the Etihad on Sunday, we’re on-hand to provide you with the most enticing bets available for the match. 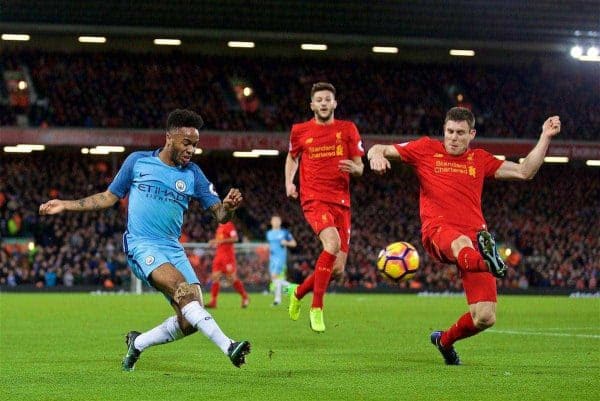 This promises to be a spectacular game of football, between arguably the two most entertaining, attack-minded sides in the Premier League.

There are superb, creative players everywhere you look, and the final result could have a huge bearing in the race for a top-four finish.

Liverpool edged City at Anfield on New Year’s Eve, and another win on Sunday afternoon would arguably be their best result of the season so far.

888Sport have endless bets on offer ahead of the game – here’s a look at some of their best ones to stick some money on.

Despite Liverpool losing just once to a top-six rival since Jurgen Klopp took charge in October 2015, City are the firm favourites to prevail on Sunday.

Pep Guardiola’s team are 24/25 to leave the Etihad with all three points, continuing an impressive run of form that has seen them undefeated since the 4-0 loss to Everton back two months ago.

The Reds are a very inviting 12/1 (usually 14/5) to win at City for the second time in a row, following last season’s stunning 4-1 triumph.

The draw is 27/10, which Klopp would be content with if he was offered it right now, given City’s form. That said, Liverpool’s record in big matches suggests a win should never be remotely out of the question. Georginio Wijnaldum struggled for goalscoring form during his first few months as a Red, but he is really starting to find his feet, having netted three times in his last appearances.

The Dutchman is still looking for his first away Premier League goal, but backing him to do just that anytime (53/10) could be well worth a punt. He scored the winner in December, at the end of the day.

Roberto Firmino was sensational in last season’s trouncing of City, and the Brazilian is 17/2 to return from injury and score either first or last. That looks great value.

For City, Sergio Aguero is unsurprisingly someone to be terrified of. The 28-year-old is 11/10 to register anytime and 7/2 for the first goal.

Admittedly, we all thought the New Year’s Eve showdown between the pair would be a goal-fest, but this one really does feel like that.

City are flying in attack, and given the defensive ineptitude of both team on occasions, it would be staggering if Simon Mignolet and Willy Caballero weren’t beaten a few times.

To make it worth your while, you should be considering over 3.5 (5/3) or possibly even over 4.5 (39/10), given the brilliant attackers on show and the refreshingly attacking style of both Klopp and Guardiola.

Our scorecast tip is Firmino to score anytime and the match to finish 2-2, at 32/1. Good luck!