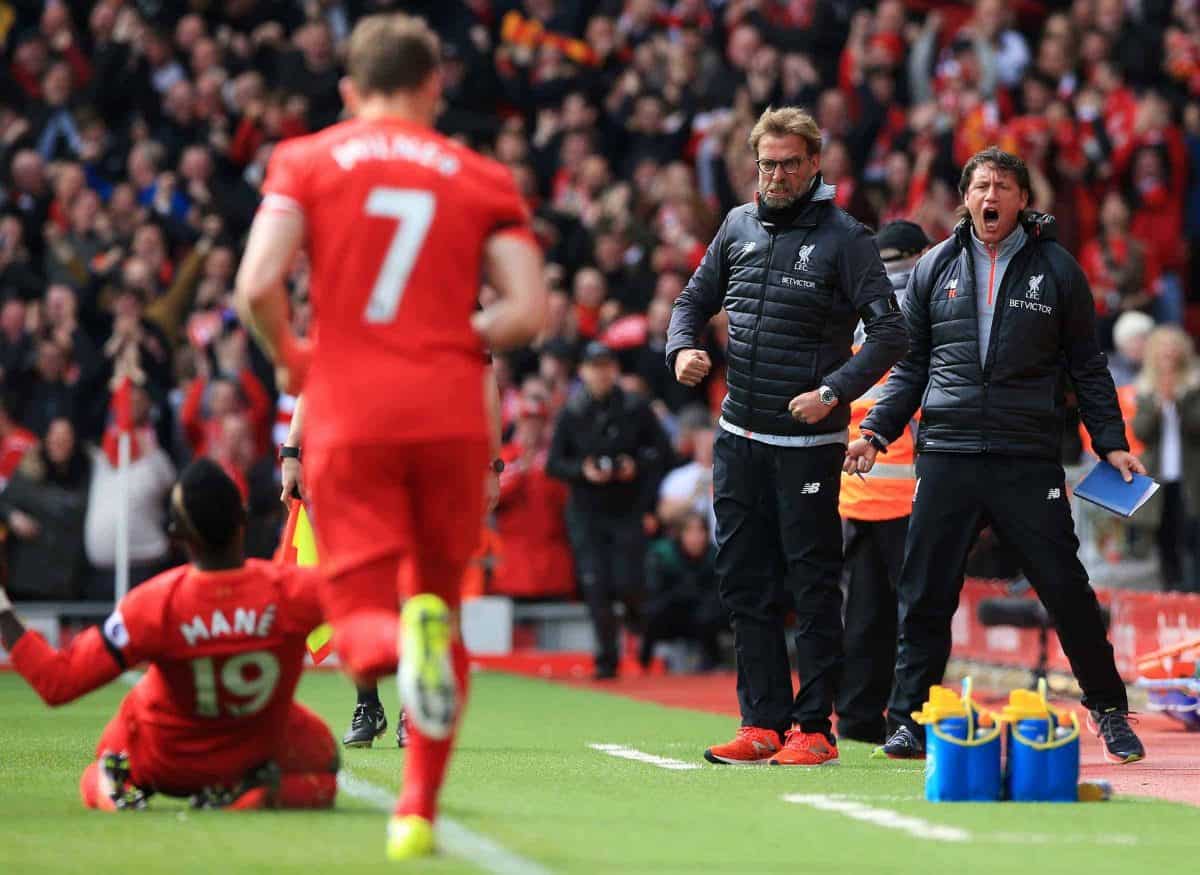 Liverpool produced an emphatic performance as they secured a vital 3-1 victory over Everton in the Merseyside derby at Anfield on Saturday.

With the onus on the Reds to take charge in their second meeting with their city rivals this season, Jurgen Klopp‘s side were able to deliver in style.

Goals from Sadio Mane, Philippe Coutinho and Divock Origi were enough to seal the three points, with Everton‘s Matthew Pennington scoring the visitors’ only goal in another disjointed display.

Here are five talking points from Liverpool’s impressive 3-1 at home to Everton.

Highs and Lows for Mane

It took another moment of magic from Mane to put the Reds ahead at Anfield, driving through the Everton defence and sending a left-footed strike past Joel Robles to make it 1-0 early on.

A goal reminiscent of his stunning solo strike away to Arsenal on the opening day of the season, Mane once again underlined his importance to Klopp’s Liverpool.

Unfortunately, however, the German could be facing a spell without his key winger, with Mane forced off the field with an ankle injury before the hour mark, with Origi taking his place.

While the manner of Mane’s injury remains to be seen, if the No. 19 is sidelined for any length of time, it could be a costly blow to Liverpool’s top-four hopes this season.

The sole consolation following Mane’s withdrawal was the strong showing of Origi in his stead—and the 21-year-old would likely be Klopp’s choice as replacement during any potential layoff.

Coutinho Back on Top After Brazil Success

It is fair to say Coutinho has been far from his best since returning from an ankle injury of his own back in January, with the Brazilian struggling for consistency on the left-hand side.

This could have been compounded by a late return from international duty on Wednesday, and the absence of Adam Lallana following his thigh problem picked up while away with the England squad.

But on Saturday afternoon, Coutinho was in inspired form, seemingly buoyed by his star turn for Brazil in their 3-0 win over Paraguay in midweek.

The 24-year-old was back to his silky, beguiling best, and this was polished off with an exceptional goal on the half-hour.

While Klopp was right to substitute his playmaker with the Reds’ two goals ahead, Coutinho showed no signs of jet-lag in terms of his quality on the pitch at Anfield. The prospect of Dejan Lovren pitting himself against the Premier League‘s leading goalscorer, Romelu Lukaku, was not an encouraging one in the buildup to the derby.

This was particularly the case given Lovren had not played for the first team since the 1-1 draw at home to Chelsea on January 31, spending two months on the sideline with a troubling knee injury.

But with Klopp putting his faith in the Croatian in a must-win clash, Lovren dominated Everton‘s wantaway centre-forward.

Lovren was seemingly first to every ball, sticking tight to Lukaku throughout and ensuring the 23-year-old was unable to find the space to drive at Liverpool’s defence, or challenge them aerially.

Along with Lovren, Lucas Leiva‘s composure and maturity in a rare outing in midfield provided the Reds with the backbone to build for a comprehensive victory.

With Coutinho tiring and around 15 minutes left to play, Klopp turned to teenage full-back Trent Alexander-Arnold for his second substitution of the afternoon.

On a basic level, this gave the West Derby talent his derby debut, but beneath the surface it also seemed to suggest a change in Klopp’s hierarchy on the bench.

Giving Alexander-Arnold the task of stabilise Liverpool’s defensive efforts along with interchanging with the likes of Origi and Roberto Firmino in attack, Klopp overlooked Alberto Moreno.

Moreno is expected to leave the club at the end of the season, with the Spaniard yet to make his 10th Premier League appearance this term, and Alexander-Arnold is a prime, long-term option.

That Klopp trusted Alexander-Arnold in an intense derby atmosphere, too, is a real positive sign.

With this 3-1 victory, Liverpool have now faced off against each of the Premier League‘s top seven sides twice, with eight more games left to play before the end of the season.

And this is where the challenge really begins for Klopp’s side, as they look to qualify for Champions League football next season by virtue of a top-four finish.

While their performances in high-profile clashes have been hugely commendable, Liverpool now must address their inconsistent form against smaller sides.

If they do so, they have a great chance of moving away from the likes of Arsenal and Man United between now and May.