Liverpool make the trip to West Brom on Sunday, and as always, our betting preview is here to provide you with some of the best odds. 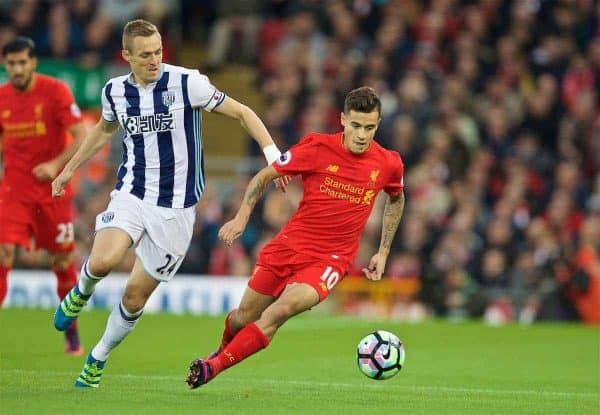 The Reds were given an almighty boost last weekend, with the 2-1 at Stoke City arguably their most important win of the season so far.

Sunday’s clash with the Baggies could prove to be an equally tricky affair, as Jurgen Klopp‘s side look to make it five wins from seven matches.

Ladbrokes have some very enticing odds ahead of the game – and a free bet of up to £50 – register here.

Liverpool are the favourites to prevail against Tony Pulis’ side, although 17/20 doesn’t necessarily represent good value.

With key men out injured and others starting to tire as the season progresses, winning at The Hawthorns will be tough against a well-regimented team.

The draw (13/5) looks more likely, in truth, but the Reds did show at Stoke that they can grind out away wins.

A West Brom win is 3/1, which would knock the stuffing out of Klopp’s men, following such a pleasing result last time around.

Roberto Firmino came up trumps with an outrageous winner at the Britannia Stadium – arguably Liverpool’s most pivotal goal of 2016/17.

The 25-year-old is 4/1 to open the scoring against West Brom, while backing him to net anytime (7/5) is also an appealing bet. His influence will be key without Sadio Mane and Adam Lallana around.

The same applies to Philippe Coutinho, who has really returned to form after a noticeable dip earlier in the year. The Premier League‘s highest-scoring Brazilian is 11/2 for the first goal – you wouldn’t bet against it.

Daniel Sturridge made a real difference when he was introduced at Stoke, and it would be great to see him finish the season in influential fashion. Backing the striker to score two or more (7/1) goals is a brave but tempting bet. It feels as though Klopp will be a little more pragmatic in his approach in the final month of the campaign, so goals might not flow like they once did.

Should you expect a Pulis-inspired 0-0 to be on the cards, the current odds are 10/1. That could be worth a few quid.

A double result of Draw/Liverpool (15/4), meaning the scores are level at half-time but Liverpool go on to win the second-half, also looks enticing.