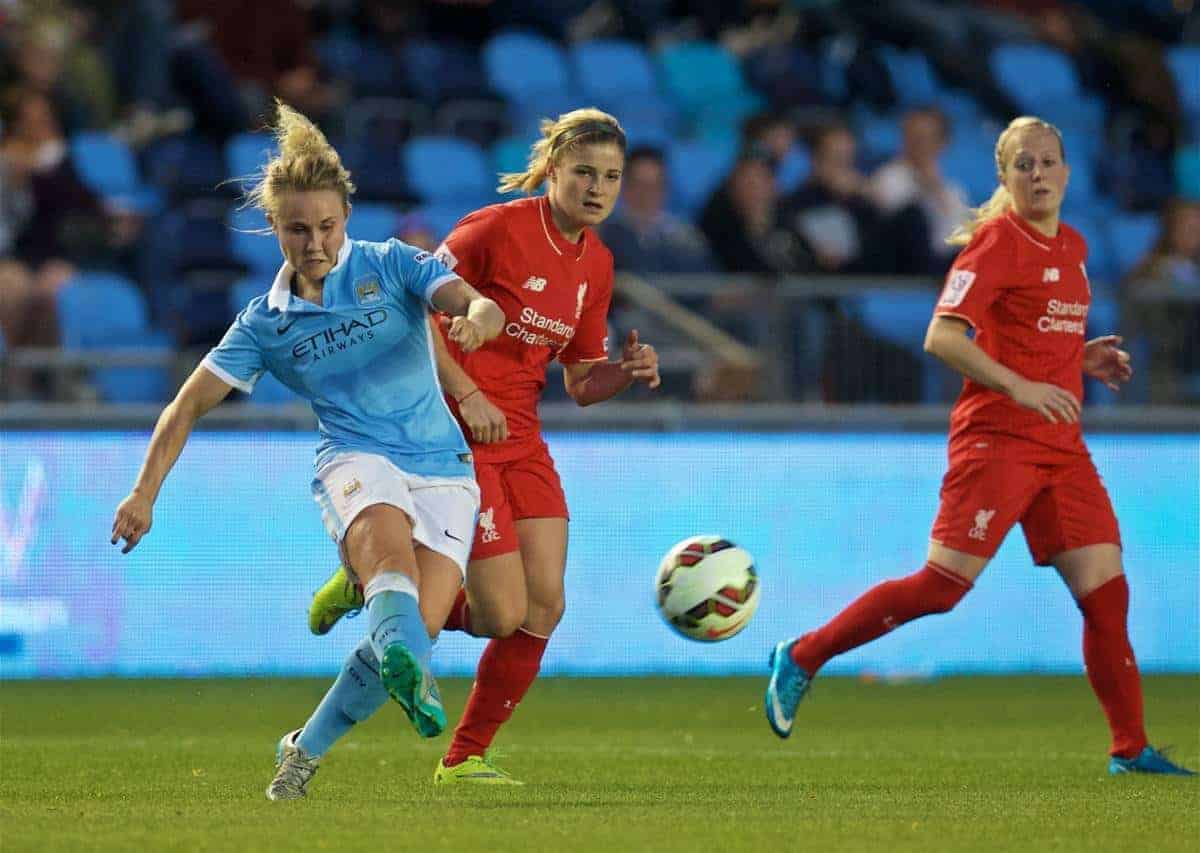 Liverpool Ladies’ hopes of reaching the FA Cup final at Wembley were shattered as Manchester City produced a dominant display to record a 1-0 victory at the academy stadium on Monday afternoon.

Melissa Lawley’s second-half strike was enough to separate the two sides as Manchester City booked their place in the final of the SSE Women’s FA Cup.

With City due to play their Champions League semi-final against Lyon on Saturday, they were expected to name a slightly weakened side but it was not the case as international stars Steph Houghton, Carli Lloyd and Jill Scott all started for the hosts.

Liverpool Ladies also named their strongest available squad but PFA Player of the Year nominee Caroline Weir had to settle for a place on the substitutes bench.

City went into the tie as favourites following their unbeaten season as Champions of the Super League and they found some early success through the middle, forcing Liverpool to concede a free-kick just outside the area within two minutes. It came to nothing but it was an early indication of how the first half would pan out.

It was Liverpool who mounted the first real threatening attack though when Shanice Van de Sanden used her pace to power through two city midfielders.

Shortly afterwards, Lucy Bronze got the better of Liverpool’s defence and squared an inch-perfect pass to City’s Lawley who was waiting hungrily in the centre of the box unmarked.

Her strike was a powerful one but it was hit straight at England No 1. Siobhan Chamberlain, who did well to keep hold of the ball and keep the scores level.

City enjoyed the majority of the possession in the opening stages but Van de Sanden continued to be a threat for Liverpool as she held the ball up well and drove at City’s defence when given the opportunity.

Liverpool’s pace was a threat on the counter-attack but they did leave themselves open in the full-back areas and it was here that City began to cause problems.

One attack down the left hand-side almost broke the deadlock as Chamberlain spilled a cross from Demi Stokes’ before recovering quickly to prevent City’s oncoming attackers from pouncing.

It was a busy first-half for skipper Gemma Bonner and her centre-back partner Casey Stoney but they defended bravely; putting numerous blocks and tackles in to deny City.

The hosts were relentless in attack though and they were almost rewarded for their efforts when Jill Scott’s run to the back post went unfollowed.

The tall midfielder was just inches away from heading City in front but she couldn’t quite get on the end of the diagonal cross and Liverpool got away with a rare piece of sloppy defending.

Liverpool mounted an attack of their own after 39 minutes when Katie Zelem found space in the box to control the ball on her chest before unleashing a controlled volley. Her shot was blocked though and her attempt to re-gain possession resulted in the game’s first yellow card.

Liverpool were holding on for half-time and they did so successfully, keeping the scores level and going into the break without conceding.

City started the second-half much the same way they finished the first; controlling the possession and building up pressure in Liverpool’s half.

Izzy Christiansen got the better of Liverpool’s Alex Greenwood on two occasions early on, using some clever back-heel skills down the right wing as City’s attackers made darting runs in and around the box.

It wasn’t until the 57th minute that City were truly able to find an opening but Melissa Lawley found space to shoot in the box and she made no mistake, slotting the ball calmly past Chamberlain who could do very little in the Reds’ goal.

City were full of confidence and Lloyd almost doubled their lead minutes later but this time Chamberlain was equal to the strike.

Liverpool struggled to gain possession as City’s dominance on the game grew but they hoped the introduction of Weir and Ali Johnson would give them a much-needed boost.

City made changes of their own too with Toni Duggan and Nikita Parris coming on and it was the hosts who looked more likely to score as Liverpool failed to mount a single shot on target in the second half.

With a slim but commanding lead, City controlled the final stages of the game to see out the victory and book their place in the final at Wembley.