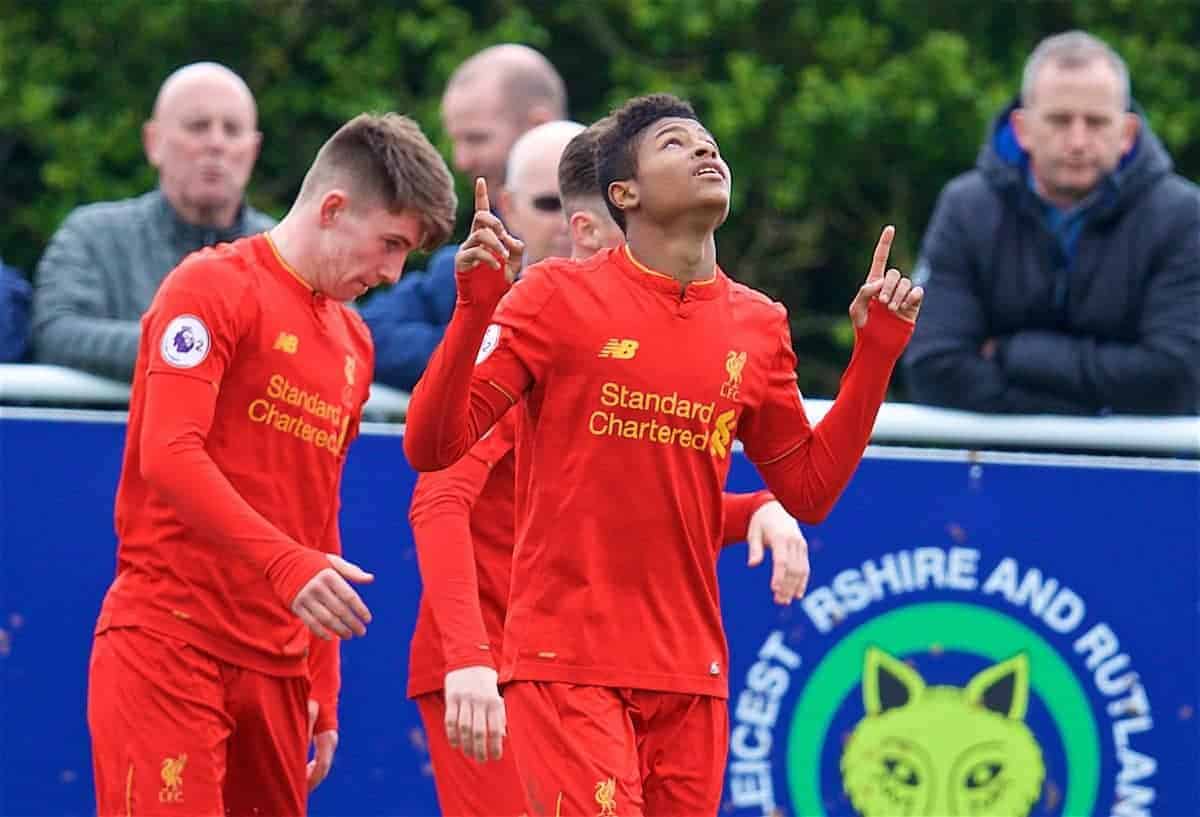 An impressive looking Liverpool U23 side defeated Leicester U23s by three goals to one, and Rhian Brewster will have raised a few eyebrows among the first team coaching staff.

A number of potential first-teamers took part in the match with Joe Gomez operating at left centre back and Trent Alexander-Arnold at right back.

The latter was one of the more impressive Liverpool players throughout, but as the side came to life in the second half others took centre stage.

Ben Woodburn and Harry Wilson looked lively in attack, while Matty Virtue built on an already solid season in midfield.

If Klopp watches the tape of this game he’ll be extremely impressed by 17-year-old attacker Brewster, who showed great teamwork and work rate on top of his goal and two assists.

There’s a hint of Roberto Firmino in his game, as he does more work than the typical centre forward. The opening minutes were sloppy as both sides failed to take control. The first effort on goal came from Leicester’s Josh Gordon who forced an excellent save from Caoimhin Kelleher.

Liverpool were able to counter-attack from the resulting corner kick, and Harry Wilson charged forward before finding Jordan Williams who then fed fellow Welshman Woodburn down the right.

Woodburn saw his shot well saved by Daniel Iversen, as both goalkeepers made impressive starts to the match.

Gordon opened the scoring for Leicester in controversial circumstances. It looked like Kelleher was fouled during a melee in the penalty area, but the referee failed to blow his whistle and the No 9 tapped home the loose ball.

The opposition attack was led by Polish international Bartosz Kapustka who impressed during last summer’s European Championships. The 20-year-old was supported by an aggressive, physical midfield, whose play aggrieved Liverpool U23 manager Mike Garrity.

The referee seemed more concerned with foul throws than the midfield battle which had the potential to cross the line and could have resulted in injuries to players on either side.

Hamza Choudhury was one of the main perpetrators of this rash play in the centre of the park, and was eventually booked just before half time.

Liverpool equalised shortly after the break when Woodburn turned on the style to initiate an attack from his attacking midfield position. He drove forward before setting up Brewster whose shot deflected in off an opposition defender.

Brewster then turned provider, working well in the right-hand channel and crossing for Matty Virtue who gave the young Reds the lead.

Wilson almost made it three later on in the game when his long range effort was well saved by the impressive Iversen.

Then, shortly after, another effort from a free kick hit the post and rolled agonisingly across the goal line before being cleared for a corner. The third finally came when the game’s two outstanding players combined. A direct run at the opposition defence from Brewster caused Leicester problems, and he played a perfect pass through to Wilson who poked home to secure the win.

It was a good team performance from the young reds, who look very well drilled for a youth side who’s team members change on a regular basis.

It’s a sign that the club have a philosophy which is understood throughout their ranks, and it’s one which took them to an impressive win against a Leicester side who were no pushovers.