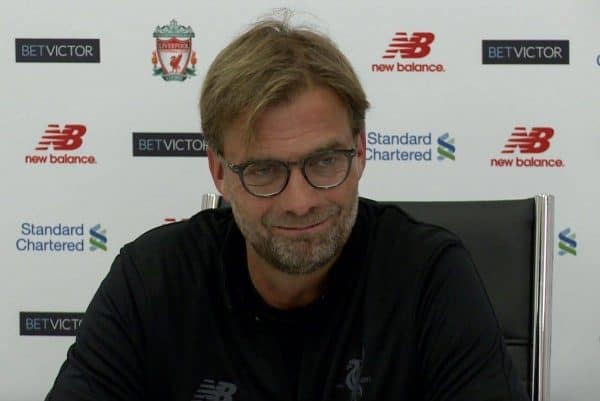 Watch as Jurgen Klopp previews Liverpool’s all-important Premier League closer at home to Middlesbrough, with the Champions League in his sights.

The Reds take on Steve Agnew’s relegated side knowing victory would guarantee a top-four finish, and could even see them leapfrog Man City into third.

Though Boro have nothing to play for, it will be no foregone conclusion for Liverpool at Anfield, but Klopp is determined to “finish successfully.”

“We have to perform, we have to win and if we have enough points we deserve to go into the Champions League. If we don’t, we don’t,” he told reporters on Friday.

The German also called for supporters to provide the right atmosphere for his side, saying “it’s something we will remember for the next three months.”

Klopp was full of praise for Boro despite their lowly finish in the league, with the 49-year-old taking nothing for granted.

He could be buoyed by the return of Roberto Firmino, however, describing the Brazilian’s recovery as “positive,” after missing out last weekend at West Ham.

Jordan Henderson is still unavailable, with Klopp explaining that “the season was a little bit short” for his captain.

After Sunday, Klopp’s focus will turn to the transfer market, and again he suggested sealing a Champions League berth would be central to the Reds’ success in the summer window.

He remained tightlipped on the future of one player, though, saying no decision had been made as to whether Danny Ward would return to the first team after his successful loan at Huddersfield Town.